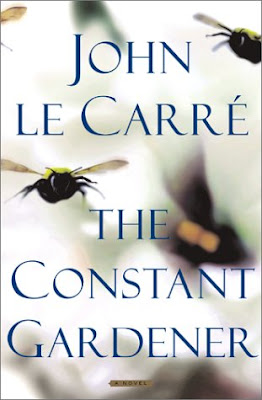 Justin Quayle is a British diplomat working in Africa. Her beautiful, young, activist wife is found murdered, while the African man she was with has gone missing. Quayle, mostly ignorant of his wife’s extramarital activities, begins to suspect that there was more to her murder than simply a random killing. His search takes him from Africa to Italy to Germany and even to Saskatchewan to uncover the truth about his wife, the multinational companies in Africa, and am anti-tuberculosis drug that might have serious side-effects.

Years ago, I read Naomi Klein’s seminal No Logo, a passionate and angry polemic against the corporations that are slowly taking over the world. It inspired activism in me. I grew up. But now that I am a little bit older and a bit wiser, it seems that the whole activist bug has been awoken thanks to such works as The Wire and books by Coetzee. The world is an awful place. There is no winning. Any resistance is futile, it seems.

This is the stage set by Le Carré’s The Constant Gardener, only the second novel from Le Carré that I’ve finished. It’s a grim and bleak novel, but filled with anger. Righteous anger. The pharmaceutical companies and the oil companies have taken over Africa. Only the corruption of the African leaders keep the conglomerates in check. There is no hope.

Except there is. Tessa Quayle, wife of the protagonist, fights desperately, strongly, courageously against the two companies who have brought an unsafe drug into Nigeria and Kenya and the Sudan. She amasses documents, interviews, facts, proofs and everything. Her reward for her high standard of ethics? Murder.

The plot here is almost inconsequential to the points that Le Carré is making. The whole premise of this book is that the author is morally outraged. He is offended by this. So he writes a beautiful and sad and entertaining spy novel about it.

The Constant Gardener is not a perfect novel. It suffers from problems that I’ve faced when trying to read a Le Carré novel before: it’s overlong, it’s excruciatingly slow, and the dialogue is heavily stylized. Certainly the moments of “action” are few and far between and when they do happen, they’re not really that interesting in the face of the more real sections.

This is more of a psychological drama, in which Le Carré slowly builds his cast and puts the pieces in place and then dismantles them with the confidence of a professional and elder writer. He’s more interested in how individuals, yes real people, choose to compromise basic human ethics for the sake of profit. The villains of this novel aren’t cackling bad guys like “Karla” from his acclaimed trilogy. The villains are just regular people who have made mistakes and it has cost them too much; they are unable to turn back.

Justin walks through this world and uncovers each piece of the conspiracy, which may or may not even be a conspiracy. He travels from one part of the globe to the next in search of truth. Not for revenge. Not for retribution. He just wants answers. Why was his wife taken away from him when she was just trying to go good? She was simply following her heart.

I really liked this novel. I thought it was entertaining, and Le Carré’s skill with dialogue is exceptionally good. However, the plotting was not nearly as meticulous and careful as I’ve come to expect from the old spymaster. There were very few surprises to be held in this book, and maybe that’s because I’m already somewhat familiar with the problems facing Africa. The idea of a pharmaceutical company being in cahoots with the British Foreign Office doesn’t really faze me. It’s par for the course, if you ask me. The Constant Gardener is kind of sad in this way. There’s not a lot I can do about it, personally. I want to help, and I donate to the Red Cross and whatnot. But I can’t take on the corporations.

There’s a scene in which a scientist is explaining to Justin that her safe was opened, the contents looted, and then the safe was locked again. She concludes, probably correctly, that the thieves had the key. She says to Justin that in the world of giants, one of them asks the other for the key and they just give it – after all, they’re both giants. They take no notice of the smaller ones beneath them. It’s sort of sums up the entire novel in a way. There’s no protection, no hope.

Despite the depressing nature of the book, it’s still a good read. It’s captivating, interesting, intriguing and teaches you a thing or two about Africa. It’s also populated with a cast of seemingly real people who make mistakes and find them to be costly. They’re as helpless as we are in the world of giants.
Posted by matthew.