The Defection of A J Lewinter 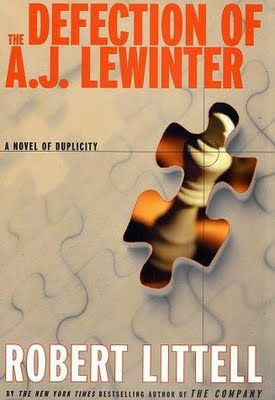 One day, a ceramic engineer working on some not so secret missile parts decides to just up and defect. On a trip in Japan, he walks into the Soviet embassy and offers important information about missiles and asks to defect. So begins a careful and subtle game between the Soviets and the Americans.

I read The Company a long time ago, way back in 2005 or something and I really liked it. Instead of being a spy thriller, it was a clandestine history of the CIA from the early beginnings to the relative present, focusing on a small group of characters. I recall being impressed with the spycraft element, but less thrilled by Littell's prose and dialogue. Since I'm on a big spy kick currently, I thought I'd give one of his earlier efforts, or even his first novel, in this case.

The Defection of A J Lewinter was equally confounding and relieving in regards to expectations. I thought that it was going to be a spy game between the Americans and the Soviets, and that was certainly fulfilled. However, I also predicted more of a con game from the author, but this expectation was not fulfilled. That isn't to say that this novel doesn't contain any surprises or fun; it's just that I would have written a more complicated ending. This is intentionally vague for a reason - to explain anything of the plot would give away more than necessary. Going into The Defection of A J Lewinter not knowing anything will make the reading experience that much better.

It's a good novel, but it's not terrific. It's tremendously readable and palatable; it goes down easy like Sunday morning. I read this in two marathon sessions and always had a good time with it. Certainly the prose isn't anything exciting nor the dialogue. Littell's skills with speech are workmanlike, but never unrealistic, a measured compliment if anything.

What works best in this novel is Littell's unironic integration of chess into the narrative. Certainly Littell isn't the first to put together the game of chess with the spy game, but he puts them together nicely here. The structure of the narrative is constructed around a game of chess: opening, middle game, gambits, endgame, etc. While the integration is, at times, needlessly pointed out by characters, it still remains well done, especially near the end of the book when things get... interesting.

For me, what makes a good spy novel isn't necessarily the action, the gadgets or the hero. This is another way of saying that my preferred spy novel isn't a Bond adventure (even though I love Bond). I prefer the more cerebral and intricate spy novels, like Tinker Tailor Soldier Spy or this. The theme of the spy game comes up in this book, and many characters comment on the zero sum game that is the Cold War. The Americans make a move and then the Soviets interpret it. Then the Americans try and interpret the Soviets' interpretation. Then the Americans try and interpret how the Soviets would interpret the American's interpretation of the Soviets' initial interpretation and so on and so forth. It's a mindgame that has no end. The better spy novels, it seems to me, take this into account and never let up. Nothing is as it seems in a spy novel. It is the unknowable and the game that interest me most.

With this novel, Littell conveys this problem with spying using both the Americans and the Soviets, a very smart move. Showing the audience both sides provides a better picture of how complicated and convoluted a spy game can get. He uses a handful of key spies and their nonprofessional outsider friends as exposition. It's an obvious way of explaining things to the audience, but it works if only because eventually Littell uses these nonprofessionals later in the book.

If there is a problem with this novel, it's that it could have been bigger. This is a rare case where I found the book to be too short, too slight, when there is so much story potential. However I must temper this complaint for expansion: a modern writer of thrillers, in this day and age, would not know what I mean. When I say this book needs to be longer, I don't mean that it needs to be 600 pages and filled with the most complicated backstory in the history of the world. Modern thrillers don't know when to stop. They just keep piling on things until the reader is exhausted. No, any increase in complexity in this novel would require an even hand, a steady hand, one that could expand on the themes and the plot without losing the thrust of the novel.

As it stands, The Defection of A J Lewinter is a good book, a fun spy yarn that keeps the reader off balance. It seems facile to criticize Littell's basic prose style and dialogue, considering this is his first novel. Even with that in mind, this is still a confident and strong debut, promising much in the way of future novels.
Posted by matthew.