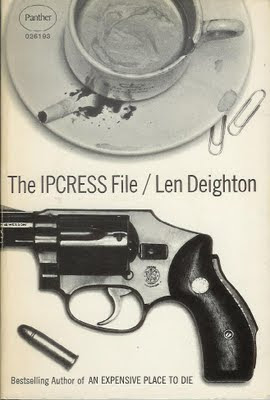 A regular English spy gets involved in an operation to retrieve a kidnapped scientist. From there, he becomes entangled in a vast conspiracy all involved in a mysterious dossier called the IPCRESS File.

Len Deighton is apparently one of the grandmasters of the spy novel. The IPCRESS File is his first novel, and the first to star an unnamed protagonist who ends up being called Harry Palmer in the film adaptation starring Michael Caine. Allegedly, one of the reasons why this novel is so important and so beloved is that it reinvigorated the spy genre, which had gone stale thanks to a million Bond clones. It's also a portrayal of the mundane aspects of a spy's life: the actual spying, the bureaucracy, the tedium.

That's really the best word to describe this book: tedious. Which is a shame, because there is plenty to like about the book. The overall structure of the book is taken from the private eye genre; this is essentially a Raymond Chandler novel in both tone and in first person narration. The dialogue is snappy and the unnamed protagonist makes all sorts of quips. Deighton also shrouds the novel's real plot by focusing instead on mundane details, sort of how Philip Marlowe always manages to stay a couple steps ahead of the audience by keeping his real thoughts to himself. However, in the case of Deighton, this works against him. Instead of looking at the real plot, Deighton's narrator is obsessed with food, fashion, other people's nonessential conversations, what his secretary is wearing, what the weather is like and so on and so forth ad infinitum. This is why it's exceedingly tedious and it took me a week and a half to read a 200 page novel that I can normally swallow in one or two sittings.

Like I say, it's a shame because there are things to like, not just the Chandler-esque wit. The complexity of the game is really well done, and it takes Deighton fifteen pages of exposition to explain to the audience at the end of the book, which is part of a twenty five page epilogue that goes on forever, focusing on mundane details AGAIN. The brainwashing plot is horrendously dated, of course, but I don't read these books to experience modern life. It's a way to relive life in the Cold War. On that note, Deighton succeeds admirably. His writing is evocative and puts the reader there in London, the Swinging Sixties, the Cold War. This is, in part and paradoxically, because of his narrator's fixation on details. Unfortunately, you can't have it both ways. Either it's an evocative portrayal of a bygone time or it's a spy potboiler, and it doesn't quite pull off the potboiler.

That's partly because of the odd pacing and plotting. The novel feels episodic, almost. The spy goes from one little adventure to the next with seemingly no connection. It's not until about page 160 (in my 212 page edition) that the plot actually goes anywhere. Certainly the last 50 pages are the best because it starts to make sense, and the narrative finally hurries up a bit, shows some hustle instead of lackadaisically meandering from one meal to the next.

Of course, as soon as I became interested in the novel, around the 160 page mark, we reach the climax, which is unbelievably boring. It should come as no surprise in this food obsessed novel that the villain and the hero of the story share the climax in a kitchen, over a hot stove while making a meal. My reaction to this was, and I quote, "are you fucking kidding me?"

Perhaps the paradigm-shifting revolutionary significance of the novel is lost on me, considering my mother wasn't even born when this novel changed spy fiction for better or for worse. That being said, I'm often cognizant of literary sea changes, so I can't quite forgive the novel for my youth. It remains a weak novel. Gorgeous prose and witty repartee does not save the novel from its tedious pacing or epicurean and sartorial obsessions.

I will give Deighton another go. He's written far too many classics in the genre for me to dismiss him outright. If I read another Deighton, I'll go with Funeral in Berlin, which purports to be another classic. If I like that, I'll read his Game Set Match trilogy. Hopefully all goes well. Life is too short for novels I don't like.

[I chose as my image, the original and hauntingly effective cover design for The IPCRESS File that shook up the book design world. It's been 48 years and the cover design still works perfectly. It might be one of the best designs ever. My feelings for the novel are in stark contrast for my adoration of the design.]
Posted by matthew.

Am reading this at the moment, with the same edition as in your picture. I'm very much enjoying it, especially the cosy atmosphere of post-war London with its griminess and lack of luxury. The hero's witticisms are excellent. I'm finding the plot baffling (have tried to read this book before) but am keeping notes as I go. Your mother wasn't even born when this was written wtf?? It's only 1962. How old are you, eight? lol. Right, time to get back to reading -- I was hoping wikipedia would have a good plot summary but even they seem perplexed...
I like your site, keep it up.
Trevor

Am reading this at the moment, with the same edition as in your picture. I'm very much enjoying it, especially the cosy atmosphere of post-war London with its griminess and lack of luxury. The hero's witticisms are excellent. I'm finding the plot baffling (have tried to read this book before) but am keeping notes as I go. Your mother wasn't even born when this was written..? It's only 1962. How old are you, eight? lol. Right, time to get back to reading -- I was hoping wikipedia would have a good plot summary but even they seem perplexed...
I like your site, keep it up.
Trevor