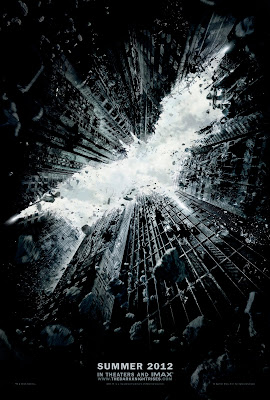 1.
This is the first poster for Christopher Nolan's The Dark Knight Rises. I'm putting this here for posterity, and - honestly - some cheap traffic. Maybe I'll get some readers if they come here via Google Image Search. Anyways, I'm excited for this movie, but it can't be better than The Dark Knight. I'll end up liking it as much as I like Batman Begins, I'm guessing. I'm also trying to avoid spoilers like nobody's business.

3.
I'm trying to read Jonathan Maberry's Pine Deep Trilogy, of which the opening novel suffers from "first novel syndrome" even though it's clearly not his first novel. I'm also trying to read Ludlum's Bourne Trilogy, just because the movies are some of my favourite of all time. It's hard going though, because the prose is just so weak.

4.
I haven't had access to the Internet in my apartment for three weeks and it's killing me. My landlord offers free Wi-Fi, but he's messed up the router somehow and I can't access it through any of my devices. My cellphone bill is going to be huge because I've been doing my surfing through that. It's really frustrating not having access to everything.