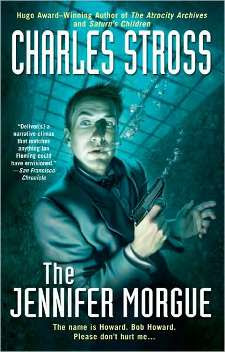 Bob Howard is a civil servant working for the occult espionage organization called The Laundry. He’s sent on a mission to stop multibillionaire Billington from raising an eldritch horror from the ocean’s depths. He’s assigned Ramona Random, assassin from a rival organization, as a partner, but it seems she has secrets of her own. Bob needs to prevent this ancient weapon from the bottom of the sea or else the whole world will be destroyed.

I like Lovecraft. I like James Bond. Seems like it would be a pretty cool fit if they were mashed up. Like I say, seems cool. The Jennifer Morgue is all about the cool ideas rather than the execution. The actual novel itself is – in a word – tedious. The author, Charles Stross, wouldn’t know subtlety if it hit him the face. It’s a James Bond pastiche, but it’s also a metafiction, in that the characters know they’re in a James Bond pastiche, and that fact becomes integral to the plot, I think. Pointing out a joke to the audience is a cardinal sin in comedy, unless your joke is an anti-joke. If Stross hadn’t gone to such pains to remind us that we’re reading a James Bond parody, then maybe it wouldn’t have been so bad.

It also doesn’t help that the book is just boring. There are action scenes, but they’re so cluttered with dialogue and with tangents and jokes that there is absolutely no suspense or tension in any scene. Not even the climactic scene, in which the boat self-destructs while the heroes escape, is very exciting. And it’s all because each scene is just full to the brim with exposition, characters yelling at each other (here’s a statistically prevalent snippet of dialogue: “what the fuck?” – imagine that over and over and over), and technobabble. Tons of technobabble.

This wouldn’t normally bother me so much and in fact, the technobabble is fun at the beginning of the book, when the audience is learning the rules of the world that Stross has built. Magic, sorcery and technology are actually all compatible in this universe, so you can write a TCP/IP protocol using sigils and magic. This sounds pretty neat, but after Stross piles it on page after page after page, you just end up exhausted. I get it, Stross, you’ve done some research. I’m suitably impressed. Now lay off of it and get back to the story.

Which never really goes anywhere. The plot structure, which mirrors any James Bond adventure you can think of, is surprisingly empty without the presence of Bond. The protagonist goes from one exotic locale to the next, there’s a car chase, and then bang you’re at the climax. It’s astonishingly vacuous and empty. This novel is as forgettable as you can imagine a novel to be.

It’s a shame, because Stross’ jokes are funny, his technobabble interesting, and his genre mash-up kind of fun. But underneath it all, there’s just nothing. There’s no heart beating in this book. It’s an exercise for Stross and it has no humanity. It’s a boring book that’s in need of editing. If this had been a 200 page fun thriller, I would have loved it. However, it’s 150 pages too long and that’s all exposition, an attempt to the give the plot some depth it doesn’t really need.

If you really want to know what it’s like reading this book, imagine Neal Stephenson’s Cryptonomicon mixed with Neil Gaiman, but without any of the light or deft touches that either of those authors have. The Jennifer Morgue is a bludgeoning hammer of a book that goes out of its way to explain everything to the audience, including the jokes.

It does sound like I’m being overly negative here, even though I did enjoy aspects of the book. It was just a tedious read. Boring, overlong and far too direct. Give the audience some credit, Stross. We can understand jokes without your fatherly hand guiding us.
Posted by matthew.