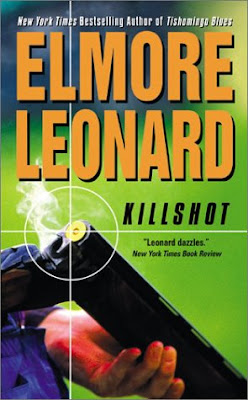 Armand is a Native American hitman nicknamed the Bird. Richie is an idiot bankrobber living with a former corrections officer who has a fetish for cons. When they cook up a scheme to rob a real estate agent, they accidentally run into Wayne and Carmen Colson. Wayne, an ironworker, teaches them a lesson with his fists and sends them on their way. But they're embarrassed and angry, so they come back for revenge...

Here's a great joke from near the three quarters mark of Killshot. The woman speaking is the stereotypical scary mother-in-law, but she isn't too bright. Here's the joke:

Richie said, "You like birds, huh? I notice you have feeders out'n in the yard."
"I've always loved birds," Lenore said. "My mother named me from a poem about a bird. I guess I just love nature."

Hahahaha too funny, Mr Leonard. Too funny. (Click here if you need the joke explained to you.)

It's been awhile since I read a Leonard book, but I think if I stretch them out, I won't get sick of them so quick. I know I mentioned this last time, but it still stands: Leonard's plotting is so weak and his structure so formulaic that I tend to grow weary. The only reason I come back is because of his characters and his perfect dialogue. I mean perfect.

Killshot isn't any different. You already know the ending of the book when you start it. Even the characters are pretty much what you expect after the first few pages. What makes Killshot so enjoyable is simply Leonard's immaculate use of dialogue. Plus this is a lot funnier than the other books by him that I've read. In addition to the joke up above, there are hilarious moments everywhere. It's a funny book in dialogue and in plot. Richie and Armand are morons, of course, and Wayne is the stereotypical man's man. Putting them together in the same room is comedic gold.

But with Killshot, Leonard throws a few curveballs. There's a scumbag US Marshall that wants to get into Carmen's pants, and there's the whole witness protection angle. Leonard finds a way to twist his usual yarn. Unfortunately, the endpoint remains clear from the opening chapters. His plotting is just weak, man. No bones about it.

There's really not much to say about this book. It's a stereotypical Leonard novel: the pitch-perfect quips, the lean cool prose, the badass characters, and the stunted plot. Why do I keep reading Leonard novels, then? Because they entertain me. They are the quintessential fluff book. Leonard is a man's version of a romance writer. All of his books are the same, but we read 'em anyway. It's the summer time and I want to be entertained. When September starts, and I'm back in school full-time doing Honours courses and reading Beowulf in Old English, then I'll read real books. But for now, I'll stick with my Leonard and my spy books and the occasional horror book.
Posted by matthew.