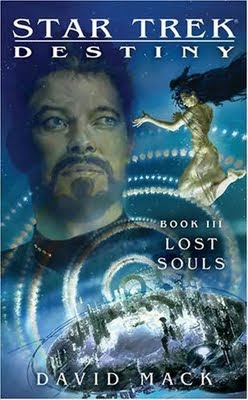 The Borg have reached Federation space. There are untold thousands of cubes, with trillions of drones ready to annihilate everything. What stands between them are Picard, Riker and Dax in their respective ships, and a woman out of time and space named Hernandez. Only an audacious plan or two can stop the Borg. But not all three captains are ready to make the leap of faith required to fulfill what can only be called destiny.

There’s a moment in a large book where everything comes together in a wholly satisfying manner, if the author knows what he’s doing and doesn’t let the narrative race from his grasp. This moment comes in the last 50 pages of Neal Stephenson’s Cryptonomicon, and in the last 30 pages of his Baroque Cycle. With Mack’s third book in his Destiny trilogy, the moment comes with about a hundred pages left. Or at least you think it does.

This trilogy attempts to give the Borg an origin, which would normally fill me with indescribable dread; the power of the Borg as a villain is its inhumanity and its inscrutable origins. Not knowing is half the fun. However, Mack’s trilogy does the unthinkable and provide not only an origin, but a satisfying one at that. Using the freedom of 1,200 pages to tell his tale, Mack sets the pieces in place and then, like Stephenson before him, capitalizes on the luxury of scale to grant a logical and wholly terrifying origin for the Borg. Without that moment I mentioned above, this origin would have fallen to pieces. It works because the pieces were put in place over 800 pages previously, using time travel and characterization. And it works because you didn’t see the book providing an origin in the first place; it’s extremely subtle how Mack sneaks it past the reader.

And then the real moment comes. I’m not going to spoil it. But suffice it to say that Mack holds his cards close to his chest. It works. Oh believe me it works.

I’m struggling to think of any other 1,200 page novel I’ve read that is so emotionally satisfying, exciting, energetic and made me sweat. The climax of the book is inexorably suspenseful and the reader is left powerless but to find out how Mack did it, how he pulled off the incredible trick of making such a long epic work so well.

It’s not perfect, again. The same problems I’ve had with the last two books apply here as well. Too often Mack forces exposition when it’s not needed, especially in more emotionally tense scenes. He doesn’t have enough faith in the reader. We can glean enough from context, but Mack resolutely points out every nuance and emotion. It’s sometimes jarring and sometimes infuriating, but it never really detracts from the overall picture.

The same complaint about the specificity of characters’ memories still holds true. For example, someone even estimates another person’s height at 193 centimeters. Really? That’s your estimate? This happened in one of the other books, but another character made a joke of it. In this case, this height estimation, it’s perfectly straight faced. I understand that Starfleet members are all highly trained in shit like theoretical physics and engineering, but there can’t be that many savants working there, can there?

These are all small issues, easily swept aside by the size of the epic and the skill with which it’s pulled off. I challenge you to name another trilogy as epic and as awesome as this. The prose was decent, the dialogue better than you’d think, and the plot is as well oiled as anything I’ve ever read. Even though this is a Star Trek novel, a licensed property, written under the watchful eye of a team of editors and a corporate parent responsible for its long term survival, this is a better sci-fi adventure than most that I’ve read in the past few years. I read Scott Westerfeld’s sci fi duo in the beginning of the year, and while I loved it, this is better. I read a few Arthur C Clarke novels last year and I loved them, but this is better. If you could imagine it without the burden of being a Star Trek novel, the Destiny trilogy stands tall as a well-written, well-designed, well-executed adventure. However, it will never be free of the prejudice that surrounds anything from licensed property – it will always be Star Trek first and foremost, which is tragic considering it’s so good.

Now before you panic and think I’ve become a Trekkie or a Trekker or whatever they prefer to be called, I do have to remind you of my fundamental issues with Star Trek: the supposed universality of people which is actually as heterosexual as John Wayne, the technobabble that supersedes relativity, and the fact that the universe is just so small. Everybody knows everybody, which is silly. And like I said in one of the other reviews, it pisses me off when a species is written as being the exact same. I hate the Klingons – they’ve never been interesting. Ever.

I don’t think I’ll be reading another Star Trek novel anytime soon. I think this slaked my thirst enough. It was certainly good enough for me to prefer it to Clarke and Westerfeld. You should do yourself a favor and read this. If you can ignore the prejudice, you might be surprised to find you love it, just like I did.
Posted by matthew.