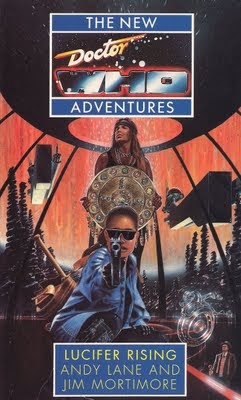 Benny and Ace ask the Doctor to take them to the planet Lucifer in the 22nd century in order to figure out why, in the 26th century, the planet is completely sealed off. Lucifer, a gas giant, is orbited by two hollow moons, Moloch and Belial, one covered with insane vegetation and the other with incomprehensible technology. A team of scientists are trying to figure out how to get to the newly discovered “heavy” elements on the gas giant, how to communicate with the “Angels” on Lucifer’s surface, and how to help turn Earth’s problems around with either of these things. Of course, soon after the TARDIS arrives, there’s a murder and the Doctor can’t help but get involved. Things aren’t quite as simple as they look however, and why they came to Lucifer in the first place isn’t what it seems.

The “base under siege” plot in Doctor Who is well worn. Essentially, you have one set, you populate it with expendable characters, have the Doctor and his companion(s) run amok, solve the problem and then move on. Lucifer Rising is really no exception. What separates it from the classic serials is how convoluted and complex it is.

The synopsis I gave just barely skims the surface of this overlong, overcomplicated book. The beginning of the book is decidedly nonlinear, and important information is held back from the reader in order to – I’m not even sure exactly – make things more opaque? Plus the book plods along so very slowly for the first half of the book and without direction it seems. So many little details are added and added, especially about the cast, wholly expendable, and the Doctor just smirks and taps his nose throughout all of it.

At the halfway point, the plot changes considerably, throwing away the murder mystery aspect and adding a more military sci-fi angle. This allows Ace to become a huge bitch, armed with guns, who turns out to be manipulating the Doctor for a change. The “new and improved” Ace has plans within plans it seems, but they fall apart instantly when Benny challenges her loyalty. Ace will never be the master chess player that the Seventh Doctor is, but who can?

This is a hard book to judge because it’s not terribly good and it’s not terribly bad. It’s too long, as I said and the second half just spins its wheels, with various members of the cast going back and forth and switching groups over and over. And the cast is filled with annoying unlikeable people. The plot is an excuse to kill people in quite imaginative ways. But on the other hand, some of the ideas are pretty cool, and there’s some intense foreshadowing of the coming Dalek War.

I’m really enjoying that the New Adventures are slowly balancing being standalone books while at the same time having a larger story arc. They’re creating their own future history, one that’s sometimes easy to follow and sometimes unclear, but at least it’s a timeline that starting to coalesce. The TV show could never do this with any measure of specificity if only because there was so much to cover. But the New Adventures are doing it with subtlety and always in service of the characters’ arcs.

And while I’m not the hugest fan of the new Ace, at least the cast is growing as people. Even the Doctor is growing and changing, seeing the error of his ways in his constant manipulation. Ace is a much easier to see arc, and it’s satisfying when she reaches a sort of catharsis at the end of the book.

Specifically to this book, though, the longer range plans are done well and the characters are written well. I’m falling head over heels with Bernice Summerfield. I can see why fandom adores her. Lucifer Rising is a decent book that at least uses Doctor Who tropes properly, but suffers from being too convoluted and not in the good way. Withholding information from the reader can sometimes be excellent. Sometimes it’s the most annoying thing in the world (the Harry Potter series, I’m looking at you. If Dumbledore had just had a normal fucking conversation with Harry, so many problems in the books would have been avoided. Dumbledore might even have avoided his own death for fuck’s sake).

At least the prose is decent. Not too self-indulgently poetic and not too Terrence Dicks. I liked it, but I didn’t love it. Let’s move on.
Posted by matthew.