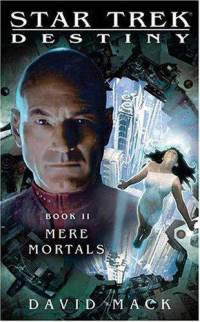 Ah, the middle part of a trilogy. Sometimes it’s the darkest and the best (Godfather Part II, Empire Strikes Back) and sometimes it’s the weakest (Temple of Doom). Sometimes it improves on the problems of the first (Attack of the Clones) and sometimes it loses focus of what made the first one so good (Transformers 2: Revenge of the Fallen). We’ve reached the middle part of David Mack’s epic Star Trek trilogy, so let’s take a look at what’s happening.

The Enterprise and the Aventine have found a network of subspace tunnels and they logically conclude that one of these tunnels leads to the Borg’s current base of operations for their invasion. As Picard and Dax slowly explore each tunnel, it’s only a matter of time before they stumble upon the correct one. On Earth, the President of the Federation has manipulated, coerced, coaxed and bribed numerous other species into a temporary alliance to stand against the threat of the Borg. A back-up force is assembled and sent to meet the Enterprise and the Aventine. On the other side of the galaxy, Riker and the Titan have come face to face with the Caeliar, and therefore have become prisoners. However, the difference between the last time the Caeliar became jailers and this time is that Hernandez, sole survivor of the Columbia and near-immortal, has a long range plan to finally escape. But things are at their bleakest when the Borg’s true force reveals itself: an armada made of thousands of cubes. The final days of the Federation have come.

While this is an overly long synopsis, I felt I had to describe the multiple plot threads being weaved in order for you to understand the vastness and the scale of this book. I’ve read few space operas that can handle both this scale and this readability. Peter F Hamilton’s space operas are truly the largest, but its strength is also its fatal flaw: his books collapse under their own weight of being too long, too big, and overstuffed with characters. Mack has somehow found a slight balance.

But I have to admit, this middle part of the trilogy takes its sweet time. If you mapped out the plot of Mere Mortals, you’d see that the Titan, the Enterprise and the Aventine do not move very far across the map of plots. Instead, their time in the spotlight is devoting to nudging them in place. It’s Hernandez that takes the true centre stage in Mere Mortals. Mack devotes at least a third of the book to show Hernandez and the other three survivors grow old, with three of them dying and then the captain submitting to a union with the Caeliar in order to become an immortal prisoner. This lends the book an almost elegiac tone, almost like an Arthur C Clarke short story. The wonder and excitement of space exploration is muted and dampened by a more introspective and quiet journey of the meaning of mortality and imprisonment.

That’s not to say that this is a flaw in the book’s structure. Far from it, actually. I found myself more interested in the newer ideas that Mack is contributing to Star Trek than the rehashing of old villains and old plots. For example, in the climax of the novel, the Enterprise and the Aventine, while exploring one of the tunnels, is held back due to a battle with the Hirogen, an irritatingly simplified species that’s only interested in war. They were introduced in the Voyager TV show. They’re nonsensical and examples of the worst kind of sci-fi writing: all members of a species are homogenous and have only one motivation. This is similar to the maxim that Klingons are all about honour and glory in battle or that the Ferengi are essentially the Jewish people of Star Trek’s future. I despise this lazy style of writing. Any alien looking at the human race will see a species so diverse and so different than any one common goal is a contradiction in terms. If you’d like proof, you could look at the fact that we cannot agree on even the factual certainty that we are murdering our own planet. Our continued survival on Earth is not a priority for billions of people! Trying to write a species as being motivated by the same goal is a facetious and childish flaw.

While this isn’t Mack’s fault per se, his inclusion of this race at the last possible moment of the book strikes me as being somewhat lazy. I’ve now read 800 pages of Mack’s book, and in the last 60 pages, he introduces yet another race. This just smells of fanservice: “how many species and cameos can I include in this trilogy?” It’s pandering is what it is and it’s not in service of the story. In the context of the story, it’s a deus ex machina designed to keep the Enterprise and the Aventine away from the climactic and devastating fight with the Borg on the other side of the tunnels.

Up until this moment, I was fully confident in Mack’s abilities. His juggling of all the plots was still going strong and his characterization was still spot on. Perhaps this stumble was just that. One can’t expect the entire book to be perfect, and I assure you, this book is good, but far from perfect.

Some other problems with the book include some forced character bits, like Worf and some security officer on the Enterprise butting heads and getting mad at each other until they realize, in true Hollywood fashion, they’re actually attracted to each other and then they have raucous and violent sex that ends with a few broken bones. If that isn’t a moment to roll your eyes, I’m not sure when you would.

One of the major problems with a canvas this large is that certain elements will be disregarded or forgotten about. It’s simply impossible to take a look at each and every character that Mack devoted a few paragraphs in the last book talking about. For example, Beverly Crusher, pregnant with Picard’s child, is relegated to one scene in this book, and it’s the scene in which we find out about Worf and this officer’s clandestine violent affair. Essentially Crusher is used as comedic fodder. I can’t expect Mack to look at every single character, but hopefully in the third book, we can resolve some plot threads.

While I have been pointing out the flaws in this book, rest assured that this is still an imminently readable and exciting novel. The second part of a closely related trilogy suffers from the need to move all the pieces in place for the conclusion, but I think Mere Mortals kind of stands alone as an exciting and at certain spots, heartbreaking and mature work of science fiction. I just pray he continues with the third book.

Although, I’m sort of worried about the conclusion to this trilogy. The stakes are almost unbearably high: there’s no realistic way to combat the coming Borg invasion, unless some magical species intervenes with godlike powers. Oh wait. What’s that called? I used that term up above. Oh right, it’s called a deus ex machina. I’m terribly worried that the Caeliar will intervene and save the day, making the contributions of the rest of cast seem superfluous. I really don’t like the use of a deus ex machina. If you have been reading my blog for years, you’ll see that I have an affinity for characters that use guile and wit, are tricksters and play four dimensional chess. Or I like solitary badasses that kick ass and take names. I don’t like feeble frail things that look to God to solve their problems. This is why I like Janeway on the Voyager. She never expected anybody to do her work for her. In fact, she went as far as going back in time and destroying an alternate timeline, including herself, in order to prevent the Borg from doing anything. The same thing with Picard. In the final episode of The Next Generation, Picard thinks and plans and acts across three different timelines. Can you imagine that? I can barely get to work on time. So I’m nervous. But I have to hope that Mack can keep the same level of quality he’s brought.

Overall, Mere Mortals is a gripping sci-fi space opera yarn. It does what it says on the tin. But, it surprisingly brings a little bit more to the table, thanks to the plot thread of Hernandez with the Caeliar. A pleasant surprise. Let’s just cross our fingers for the third part….
Posted by matthew.