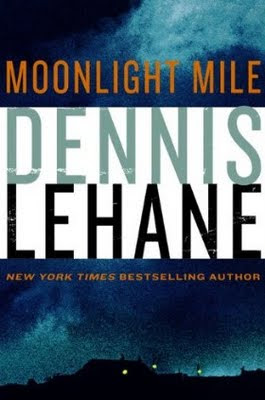 The last Dennis Lehane book I read was Shutter Island while I was in university. So we’re talking years. During a brief but feverish time, I read everything published by that guy. I loved every single page. That is until I tried reading that historical fiction monstrosity he wrote. Which was bad. It should be no surprise that my favourite book by Lehane was Gone Baby Gone. It’s a masterpiece. In fact, Lehane’s third, fourth and fifth books are all masterpieces. Fast forward twelve years and Lehane has published a sort of sequel to Gone Baby Gone, as well as a final adventure for Patrick Kenzie and Angie Gennaro.

Twelve years since Patrick handed four year old Amanda to her drug addicted and alcoholic mother, in spite of everybody telling him otherwise, and Amanda’s gone missing again. This time, the strong-willed and academically-stellar sixteen year old has disappeared on her own. When Patrick and Angie track her down, things aren’t quite as cut and dried as they seemed.

I refuse to divulge any other information about the plot of this book. Not because the contents are so incredibly shocking but because it’s the journey, man, not the destination. We all kind of know how a book like this is going to end, so it’s all about how they get there. And they do so in the same strong style that Lehane’s been writing in.

He’s so good at this kind of thing. He makes it look so effortless: the dialogue, the plotting, the subtle use of the first person narration to a) withhold info from the audience and b) keep them in the know just enough. I love George Pelecanos. The Night Gardener is one of the best mysteries ever written – but the guy writes cold books. Lehane does what Pelecanos does but with more humanity. It’s been – what – seven or eight years since I read a Kenzie-Gennaro book, but let me tell you, I can still remember the scene in one of the books where Patrick, who’s been sporting a beard due to some facial scars from a previous book, shaves it off to intimidate somebody and he feels sick about doing it. The best parts of those five books is the toll that it takes on the cast, how they grow and yearn and love and develop over five books. No other mystery series I’ve ever read (not a lot) has been able to do that. Plus, Lehane’s dialogue is just fucking brilliant. Maybe not as good as Richard Price, though. In fact, some of the bits of dialogue show a clear influence from his time working with Price on The Wire.

The Wire’s influence is also apparent. The biggest problem facing Patrick these days isn’t villains but the recession. Lehane spends a long time setting the scene for us with descriptions of suburbia, debt, health insurance, shitty jobs, and the overall state of affairs in Boston. But where you read Boston, mentally substitute it for America. It’s a shitty place nowadays and Lehane isn’t afraid to shove our noses in it.

That’s not to say that this whole book is doom and gloom. Far from it. There’s a scene in which Patrick and Bubba go after Patrick’s stolen laptop and it has some of the funniest one-liners I’ve ever read. And Lehane just makes it look so fucking easy.

Did this need to be a sequel? Couldn’t we have had one final adventure that doesn’t involve reading Gone Baby Gone? Well, yes and no. Sure it could’ve been its own novel, but you’d never get the closure and the emotional catharsis from finally shutting the book on that case. Patrick carries the scar of Gone Baby Gone through to the next novel and then again to Moonlight Mile. He needs it over and done with. It’s not the most subtle piece of characterization, but Lehane pulls it off by basing this need in emotion, by investing in the two main characters. They’re still people. They feel like real people.

Not much to add to this, unfortunately. It’s a fantastic read. Easy, digestible and at times, hilarious. I hope Lehane keeps writing stuff that isn’t historical fiction. He’s so much better at this.
Posted by matthew.