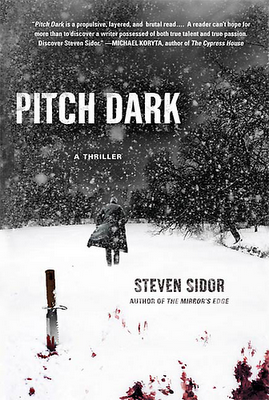 Vera’s on the run from some men that she doesn’t know. Wyatt and Opal own a motel, but haven’t been the same since somebody shot up the diner they were eating in. When Vera shows up at the motel, with those men on her tail, the strangest and scariest night of their lives starts. They want what Vera stole and they’re willing to destroy everything to get to it.

I’m not even 100 percent sure what to say about this book. It’s a supernatural thriller, a big chase scene and then a “base under siege” kind of story. People get shot. People get tortured, maimed, and the villains say scary things. It’s always clear who the good guys are and who the bad guys are. It’s always clear how the book will end, too.

But that doesn’t mean it wasn’t a suspenseful and taut thriller. It just wasn’t great. That’s all. Steven Sidor, the author, has a fairly good grip on the small details that make horror so effective. It’s not the monsters that make horror books so good – it’s the people, that could be you or me, in danger that make it work. Sidor understands that and invests in his cast, to a certain extent. He gives backgrounds and personalities to most of the cast, save for Vera, ostensibly the protagonist. I’ve never got the sense that she was a real person. How did she get mixed up with the crazy boyfriend who stole from a coven of lesbian witches? How does Vera go from being a normal person to a girl with an addiction to bad boys? Has she always been like this? If she likes bad boys and whatnot, shouldn’t she be more of a badass in this book? I don’t know. Vera’s a sketch rather than a character. Opal and Wyatt, however, are fairly fleshed out. They seem like real people.

The problem is that the idea is better than the execution. To properly do a base under siege kind of story, you need a few solid elements. One, you need a really good cast. Sidor has half of that. Two, you need a villain so scary and so merciless that it keeps the stakes high. Well, Sidor’s villains are okay, if a little faceless. The main villain, the one with a name and a story, isn’t scary at all. Like, at all. He should have put a little bit more effort into making the core group of villains as scary as possible by having them do inhuman or unspeakable things. Three, you need a good reason WHY the base is under siege. Sidor has got this one pretty well under wraps. The Macguffin of the book is essentially Clive Barker’s Lamont Configuration, but with a different name. Except, Sidor gives it a logical background. It makes sense.

So Pitch Black is missing a good cast, missing a good villain, and why is this? Because the premise sounds so much better than the actual book. The problem and this paradoxical considering what I just said about logical backgrounds, is that Sidor tries to explain too much. If we hadn’t heard so much about the past, I would’ve been more interested in the present. The thing is, Sidor tells instead of shows. He goes out of his way to explain motivations and how dangerous things are. I’d rather he didn’t. What makes Clive Barker so effective is that he never explains. He just lets things happen and escalate, and everything is so confusing. Barker’s worst novel? Everville, the one where he explains too much! If Sidor had just let his premise be the execution, without too much explanation, I would’ve loved this book.

And that’s not to say that this isn’t a good book. Sidor has an excellent handle on pacing and tension. Once the shit hits the fan, things never quite calm down. It’s a pretty incredible thrill ride. But it could’ve been better. The climax is a little too down to earth considering how supernatural this book is.

I liked Pitch Black. It was a fun easy read. Took me two sittings to read it. I just wish that it had been a little bit better, a little bit more confident and more balls to the wall. In the hands of a ballsy-er writer, we would’ve had something more like Scott Smith’s The Ruins. Oh well. They can’t all be perfect.
Posted by matthew.