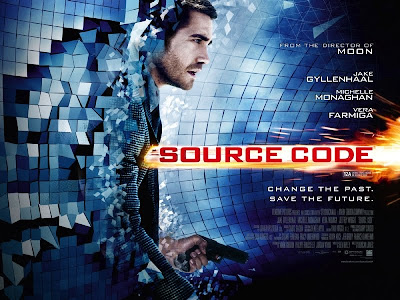 Captain Colter Stevens wakes up on a train in somebody else’s body. He has eight minutes to figure out who is the bomber on the train. It seems that this morning, somebody has blown up a train and it’s only the beginning salvo in a war against Chicago. Stevens has been tasked by his military to go into the source code, over and over, and re-live the last eight minutes of the body he’s occupying, until he has discovered the bomber so he can save the lives of countless millions.

This is a tight movie. I like tight movies. I like movies where the end wraps back to the beginning. This should be no surprise that I like movies like this; I have an ourobouros tattoo for fuck’s sake. Source Code is a fantastic sci-fi thriller that rushes through its hour and a half and left me exhilarated. I was super excited about seeing this movie and I was super excited upon finishing the movie.

Part of this is the screenplay, part of this is the fairly slick direction from Duncan Jones (son of my beloved David Bowie) and a very large chunk of it due to Jake Gyllenhaal (I had to Google the spelling). I’ve always thought he was an excellent actor, from Donnie Darko to Zodiac to this, he’s able to convey so much in his gigantic eyes and expressive face. I also like that he’s rather easy on the eyes. His face is in almost every single scene of this movie, which makes sense because this is kind of a puzzle box like a Chandler novel. Where Marlowe is in every scene unraveling something in a linear fashion, Stevens is figuring things out one piece at a time at the same time, if you think macrocosmically.

Yes, it’s Groundhog Day meets Murder on the Orient Express. Yes, it’s Memento but instead of backwards, simultaneity. However, due to its slick execution and great performances, it rises above its tired mashup genre background. It’s constantly thrilling, and the twists in the plot start coming early, so you’re constantly off kilter, but in a good way, the way Memento is always thwarting you. This is the intelligent sci-fi thriller that Inception wanted to be. Instead of being sprawling and overly linear and frustratingly simplistic, Source Code is tight, moves quickly, and doesn’t dwell on the fact that its very premise makes no sense.

For the thousands of people who inexplicably found Inception to be far too confusing, then avoid this movie. You’re not going to like it. That’s not to say that Source Code doesn’t find a way to make sense; the ending is a good ourobouros set up from the beginning, so once you finish the movie you’ll find it satisfying. Source Code keeps on your toes intellectually speaking. I like movies where it doesn’t hold my hand. I don’t need to be led through the plot or the mystery. Let me figure it out, or, if I can’t, then I’m going to be doubly impressed.

I did not predict how this movie ended. I was happy about that. Source Code is a great movie and you should see it. I don’t really have anything to add to that.
Posted by matthew.