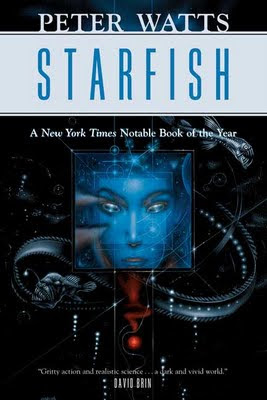 I’ve mentioned before that anything set on the bottom of the sea had an automatic “in” with me. Crichton’s Sphere ranks as one of my favourite books of all time (embarrassingly enough). I had heard about Canadian Peter Watts’ Starfish before, but I just never got around to reading it.

A huge multinational conglomerate has created a power station at the bottom of the sea near a geothermal rift, near the Juan de La Fuca Rift. The only problem is that the people required to staff it come from numerous walks of life: rapists, pedophiles, and victims of sexual abuse. It’s equal parts experiment and strategy. All of the “rifters” as they’ve been called are genetically and physically modified to live at such a pressure and swim freely in the ocean. But the corporation that employed them have bigger plans than simply providing power to the masses. Plans that involve ancient bacteria from billions of years ago, and smart gels made of human neurons making decisions for the whole world.

This is a weird book. Weird as in what happens in this book and weird in how Watts conveys everything. This book is like a nightmare; everything has a sort of dreamlike feel. Nothing is described at face value and everything, including the plot, is opaque. Watts’ style is intriguing and extremely readable, but often it’s difficult to parse exactly what the hell is happening. This is one of those rare times that I think a cinematic version would perform better than the book itself. Not only would it clear things up a bit when it comes to the action scenes, but it would help get across the intolerable pressure and miasma of everything.

Don’t be fooled by the synopsis. While it sounds like a usual technothriller, it’s really not. It’s a bleak and harrowing vision of the future where things are awful for everybody in the world. Millions of refugees from various parts of the world exist in camps where life is subhuman. The internet is becoming far more complex than humanity ever expected, and the logical conclusion of that is the matching complexity of the viruses. And of course, power is a scarce resource.

Inside the power station, which is typically small and cramped, things are even more bleak. Each member of the team slowly disintegrates, their personalities becoming more and more detached from reality and their past. The only thing that matters to them is the ocean. They sleep outside the station. Some of them even eat the fish and shrimp. Any outsider from the surface is regarded with pure contempt. It’s only a matter of time before things end.

And they do. In spectacular fashion. When Watts finally draws all the threads together, it’s somewhat satisfying. It would be even more awe-inspiring if I could make sense of everything that happened. There are a lot of questions that seem obvious to the cast, but I’m in the dark. I still don’t entirely understand why the corporation used crazy people in the power station. The motivations are somewhat murky. Is it because they’re expendable? Is it because they’re cheaper to employ than true experts? If that’s the case, why does the corporation exacerbate their preexisting psychological conditions? It’s heavily implied in the book that the station is designed to keep the rifters on edge, psychologically speaking. But it’s never clear why. Perhaps I wasn’t reading close enough.

It’s not like there is any shortage of exposition, though. There are a few sections of just pages and pages of conversations about the smart gels, the biology of the deep sea, the history of the planet, the origin of life, the Internet, all of these things. Sometimes it’s very subtle, like when the psychiatrist interrogates a smart gel and the audience learns why the smart gel eventually decides in the favor of the proto-bacteria and not life as it exists now (a computer would rather play checkers than chess – because one is simpler and therefore more manageable). But other times it’s like the characters speaking directly to the audience. It’s understandable that a novel of this complexity and diversity of background would need direct exposition, but it’s off-putting when Watts can do it subtle sometimes and clumsily other times.

On the whole, I’m not sure if I necessarily “liked” this book. The ideas are fascinating and extremely arresting, but the execution, while unique, left a lot to be desired. The characters are kind of fluid and respond to the plot however it requires them to, a sign of weak characterization. Plus, things are somewhat opaque and hard to follow at times, as aforementioned. There’s a sense of missed opportunity here. If only Watts had the strength of a seasoned writer, then maybe he could have held onto the narrative a little bit more.

Starfish is only the first book in a “trilogy” which is actually a quartet. The next book is Maelstrom, and is supposedly far more bleak and depressing than this one. I haven’t decided if I’ll read it yet.
Posted by matthew.