Transformers: Dark of the Moon 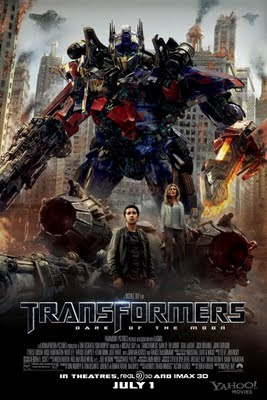 Let's get one thing clear. The second movie, while entertaining when I saw in the theatre, is a piece of shit. All that I hoped for this third movie was for Michael Bay to have learned his lessons and improved upon the second movie. I'm hesitant to use the word "film" in connection with the Transformers franchise. However, I'm willing to admit that I am a huge Transformers fan, of the comics, of the toys, of the G1 series, of the movies, so going into this review, know this: I will be totally biased.

Rest assured that this movie has fixed a lot of the problems. Not a ton, but most of the egregious problems. You can breathe easier: the racist Twins do not make an appearance. Also, Megan Fox is gone. I don't like Megan Fox so I am totally okay with this. Her replacement is an English supermodel and you know what? She doesn't really do a bad job. She starts out the movie as just a pretty face. Well actually her first scene in the movie is her ass in panties, but you get the idea. She spends the first three quarters of the movie wearing white clothes (I get it, Michael Bay) and being hot. Then, surprisingly, she becomes interesting at the end of the movie. I really liked her. She does a better job than Megan Fox.

The other problems fixed from the second movie is there is a distinct lack of robot testicles in this one. Plus, the aforementioned lack of racist robots, and you've got a recipe for success as long as Michael Bay can follow it. Does he find success?

Well yes. The stakes are far higher in this movie than in the last and the action, the characters, the plot, everything is slightly more complicated and decidedly more mature. It's the darkest one yet. It's nice how hardcore everything is. The Decepticons just fuck shit up. There's a villain who is essentially a giant sandworm from the Dune movie and that robot just fucks up some serious shit, leveling a building. And even Optimus Prime kicks serious ass. Yes, I know I'm reviewing this like a thirteen year old boy would, but are you expecting anything else? I really just wanted to see giant robots fighting. And I got it. In excess.

I like this movie a lot. It had everything I wanted in it. It was funny, it was dramatic, it was epic. Was it totally illogical? Hell yes, my friends. It doesn't make a lick of sense. The Decepticons bring the charred planet of Cybertron into the atmosphere of Earth. Cybertron is significantly bigger than Earth. You'd think some self-described robot geniuses would know that something that size near our planet would utterly destroy everything thanks to gravity. Oh well. Plus, why are robots in disguise (that's what they are) hiding out as trucks in the savannah with zebras. Yes... zebras. It doesn't make sense. I don't want it to.

There's a cool scene where Optimus just blows a plane from the sky and says to Shia Leboeuf, "I'm going to kill them all" or something to that effect. He then proceeds to slice up, shoot, dismember, and even decapitate a whole mess of robots. He even pulls a dude's head out of his body and then dangles the still connected spinal cord. Yes. This movie fucking rules.

You want intelligence? You want pathos? Catharsis? Get a different movie. This is Transformers, my friends. And one of them is voiced by Frank Welker. Anohter by Leonard fucking Nimoy. So there. Suck on that.
Posted by matthew.

Optimus fucked so much shit up, I seriously almost screamed like a pre-teen, at the top of my lungs "FUCK SHIT UP, OP!"