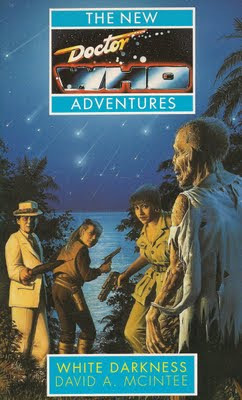 The TARDIS crew need a vacation, so they come to Haiti, in 1915. It’s not much of a vacation: rebel groups are fighting the military in charge, the German army sits off the coast waiting for their chance to strike, a small detachment of US Marines are on their way, and on top of all of this, somebody is bringing corpses back to life.

One of my problems with the Russell T Davies era of the show is that the Doctor only ever spends time in England. Or in Wales. That’s about it. He never ventures out of his comfort zone. This is due to a) budget and b) Davies’ desire to develop the supporting cast. The New Adventures line has no problems with a) and has no interest in b) so it’s nice when an author takes the Doctor somewhere other than London. In this case, we have Haiti during the First World War.

Another problem with Doctor Who, that’s slowly being rectified by Moffat’s era, is that everything is just so goshdarn white. The Doctor’s white, his companions are white, and everybody who is ever on the show is white. The Doctor needs to be introduced to people other than whiteys every once in a while, if you ask me. Again, it’s nice when the Doctor is taken someplace inhabited by people other than white people.

This novel also makes explicit something that’s been implied in the past few books, and that I understand will occur even more: the Doctor meeting Lovecraft’s creations. In this book, we have a great setup – the Doctor and his companions discover that the Haitian’s brand of voodoo or however you want to spell it, is being subtly influenced by the Old Ones, in an attempt at psychic subjugation. It’s a fairly clever connection to make.

However, this novel doesn’t really capitalize on the cleverness of the setup. While it sounds very interesting, White Darkness is interested in only a few things: showing how racist everybody is and shooting everybody. Or exploding everybody. This book might have the highest body count yet in Doctor Who books. The end of the book is just thirty pages of a long protracted shootout and explosions. So many explosions. I don’t think I’ve ever read so many variations on how to describe something blowing up. It’s tedious.

Which is a shame, because most of the book is decent. The Lovecraftian stuff is kept hidden, to its benefit. White Darkness doesn’t expose its best tricks too early. Instead, it’s a slow burn of reveals which add to the sense of uneasiness, a requisite feeling in anything related to Lovecraft. While this slow burn occurs, the author takes the cast from one point of the island to another and back again, keeping everything suspenseful and action packed enough.

McIntee writes a good Benny and a good Doctor. He has an okay handle on them. He even remembers that Benny is an archeologist. However, he stumbles a bit with Ace. Now this is probably due to more of an editorial influence than to McIntee himself, but it’s worth mentioning. The new Ace is all about violence and killing people and being sexy. In White Darkness, this is still true, except Ace does a lot of hand wringing and whingeing about it. She experiences remorse about killing a dude. This is kind of annoying and doesn’t quite fit with the Ace of the previous book, who was totally okay with kicking ass and not thinking twice.

If this is an attempt to give Ace more depth to her character, then McIntee is doing it in a clumsy manner. If this is just the editors having no idea what to do with the new Ace, then it’s even worse. Either way, it wrenched me from the book and had me question the competency of both the author and the editor.

I do have to commend the author for one thing, though: the black people of Haiti are not all the same. Just like any group of people, there are bad guys, good guys, opportunistic people, cowards and just people trying to live their lives. McIntee kind of captures the feel of a village in revolt, angry at those currently in power, but not organized enough to do anything about it. He also captures some of the normal people, swept up in the violence of the time, but wanting to do good and not knowing how. A perfect example, one of the Doctor’s allies in this book is a young Captain who is disgusted by his General’s sadistic methods eg. executing, in cold blood, all of the poorly treated and malnourished prisoners. McIntee really nails the tension in this Captain, one who wants to be a good person, but is still loyal to the military. He’s a well written and sometimes ambiguous character, up until the final third when he fully commits himself to helping the Doctor.

White Darkness could have been better. There’s more the author could have mined out of the excellent premise. That being said, the novel isn’t bad. For most of the book, he weaves a suspenseful and entertaining yarn that unfortunately disintegrates into a messy and overlong gunfight finale. Still, it’s always nice to see Lovecraftian elements combined with the Doctor.
Posted by matthew.