The Winter of Frankie Machine 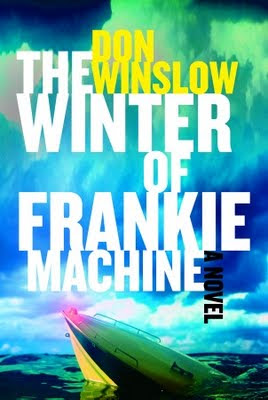 Frankie Machianno is a sixtyish guy who owns a bait shop on a pier in San Diego, has a beautiful fortyish ex-dancer for a girlfriend, and his daughter just got accepted into med school. Everything seems perfect until some guys from his past ask him to do a job, cause he's the only one who can handle it. But it turns out to be a setup, they try to kill him, but they can't cause he's Frankie the Machine, one of the best button men in all of California until he retired. Now he's running for his life and trying to figure out who wants him dead and why.

God I love Don Winslow. If I'm ever depressed or sad or anxious about the world, I can just grab one of his books and escape for awhile. Every book I've read by this guy has filled me with happiness and excitement and satisfaction. If his books had any literary merit, I'd do graduate studies on the guy. But alas, his books are just simply the best ass-kicking crime fantasies out there and nobody writes these better than he does.

I compare him to James Ellroy a lot, but Winslow is a lot leaner and a lot tighter. His thrillers are shorter and use less extra space getting everybody from point a to point b. Winslow's also kind of like Elmore Leonard, a big influence on him. Except Winslow knows his way around a plot a little bit better than Leonard. With most of his books, Leonard exudes cool and awesomeness, especially with dialogue and cool cats for a cast, but his plots aren't the tightest. They kind of flounce around until the inevitable showdown and shootout. But Winslow keeps you guessing a lot. Yes, it always ends in an inevitable showdown and shootout, but with whom and over what often remains a mystery until the last twenty pages.

The Winter of Frankie Machine is really no exception to the Winslow formula, which I'm starting to see and frankly, I don't really care. Frankie Machine is an ex-soldier, a smart guy, an honourable guy, and a guy who just wants to do right in the world, even if that means smoking some wannabes and poseurs. He's like all the previous guys. Yeah, and he surfs. Of course he does.

Normally the formula would tire me. I'd be bored with the same old. But Winslow's prose and use of characters are still fantastic. I loved this book. Not as much as Savages or Bobby Z (which are fucking masterpieces), but I loved it more than most thrillers I've ever read. I'm going to heartbroken when I run out of books by this guy. That's why I don't read them all at once, you see. I just finished this one, and I'm super excited about reading another one, but I just can't. I can't do it cause then I'll be another book closer to the finish line, and that makes me a sad panda.

Oh well. This book still rules. It's not quite as exciting as Bobby Z, and it leans a little too heavily on the background instead of the present. Plus, the central mystery is pretty complicated and there are a million little flashbacks, some of which are integral to the mystery and some of which are just flavour, but both categories are given the same narrative weight, so you never know which ones you need to remember. Plus the cast is fucking huge. There's gotta be over a hundred named characters in this 300 page book, and they all have Mafia-style names.

This book is more like an early Winslow book, like he's finally stumbled upon how he wants to write from now on, and he's just got to iron out the kinks. It's not a big deal. This book still kicks more ass than Jean Claude Van Damme and it lasts longer than a movie. It's got some sweet episodes of dudes being fucking stonecold motherfuckers, if you know what I mean.

Regardless of the flaws, I still loved it, so go out there and grab yourself a copy.
Posted by matthew.