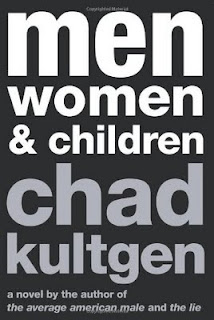 He... removed Allison's shirt, skirt, and underwear so she lay completely nude in [the] bed. He then stood up and removed his own jeans and underwear, leaving the knee-high football socks on,pushed down around his ankles. She noted this and added it to the list of details that she would always remember and would always wish had been different.

This is a scene from about the first third of the book, after author Chad Kultgen has introduced his primary cast and then proceeds to move them across the chessboard to each other, or away from each other in other circumstances. This is Allison's first sex act, and it's utterly heartbreaking, but understated at the same time, similar to the scene in Yates' The Easter Parade when the protagonist loses her virginity to a soldier who doesn't know her name. Most of this book is filled with these small moments of non-intimacy. There is no love. There is only the sex act, and all are consumed with desire for it, or confused with intense emotions about it.

I picked this book up because it was recommended for fans of (early) Bret Easton Ellis or fans of Palahniuk. I didn't get the sense that this was similar to either of those authors. Mostly, the book reminds me or Tom Perrotta and Richard Yates, both of whom peeled back as many layers as they could of their characters and exposed to the reader what really lies in the heart of suburbia.

However, one thing Kultgen doesn't quite manage is his prose. It's flat, it's simplistic and it's altogether far too detached. Unlike Perrotta or even Yates, I never got the sense that Kultgen even cares for his cast. They're just amoebas under the microscope, similar to how Zola viewed his characters. This is felt clearly in Kultgen's underwhelming prose. When a character is caught off guard by something, the narration helpfully provides that he's surprised. When they're mad, we're told explicitly they're enraged. And so on. Nothing is left unexplained. Kultgen uses the same flat clinical voice to describe everything from a beautiful love scene between a newly divorced father and his new girlfriend to the aforementioned Allison's plan to have anal sex. This detachment doesn't work in Kultgen's favour, unfortunately. It serves to highlight the artifice of the book and how Kultgen has no sympathy for these people.

A book like this needs to work by one of two ways: either it comes from a strict moralist point of view (Ellis, Welsh) or from empathy (Perrotta, Yates). I definitely do not get the sense that Kultgen is a moralist nor do I get the sense that he empathizes with his young cast and the pressures they feel to be adults. He simply puts them on the page, moves them around and has them make mistakes. The novel ends up feeling slight because Kultgen doesn't come down on either side.

One can't even say that this novel feels like journalism because the artifice of the plot feels too strong. The overarching structure of the novel is too much like a novel for Men, Women & Children to be journalism. That's not to say that it doesn't feel realistic. It does, thanks to Kultgen's couching of events in a here and now kind of way, up to and including real life current websites and TV shows.

There's almost a sense of "can you believe what kids are up to?" with this book, like Kultgen saw this happening and wanted to share it with the world as a piece of shocking information, similar to the way people share stories of misfortune to remind themselves how much better off they are than the unfortunate victims. This robs the novel of any emotional impact beyond the above instances of non-intimacy. There's a scene in which a wife contemplates having real sex with her husband, moving against him rather than simply sitting there and letting him "grind his penis against her". This pretty much sums up how I felt about this book, which, like the sex act, is complicated. Kultgen is a strong enough writer to have crafted something compulsively readable and slightly entertaining beyond the titillating nature of the plot, but when it comes down to it, the detachment and the exploitation of harrowing emotional ground left me somewhat empty.

I certainly didn't hate this novel. Like I said, Kultgen is a good enough storyteller. His grasp on the fundamentals is not up for debate. The problem is the details, like having the reader invest in the cast, emotionally. It pains me to say this, but unlike any of the other authors I have compared Kultgen to, the most similar is Zola. A cast of character is nothing more than laboratory subjects to both authors. They both want to see what makes them tick, and they put them through a complicated plot with many twists to see how they hold up. This plot always includes gross mistakes made by the characters and the reader is always helpless to intervene to protect these people from themselves. However, a huge difference between Zola and Kultgen is that Zola cared about society. He wanted to expose its problems to the people for the betterment of civilization. Kultgen doesn't display any of that concern with Men, Women & Children. He just wants to shock and appall us.
Posted by matthew.