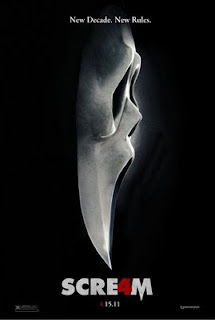 Sydney Prescott has come back to Woodsboro to promote her new book which, in her words, recasts her out of the role of victim. Of course, it's an anniversary of the original murders, so obviously somebody starts cutting people up. Sydney is joined by Dewey, now sheriff, and Gail, now novelist. There's Sydney's young cousin and her friends and the violence begins anew.

Okay, here's the thing. When I was in university, I wrote a really big novel about a writer who creates a TV show about his own life and then writes himself into it. Then, a fictionalized version of myself comes along and helps write it with the main character. There's a discussion in which "I" ask James, the writer, if this one particular subplot is a little too obvious. James explains that by mentioning how obvious it is, it excuses it from its crime. Of course, this doesn't justify lazy plotting. By pointing it out, a writer isn't being clever or "meta" - they're simply finding a lazy way of apologizing to the audience about how lazy they are.

That sums up Scream 4. A new Scream for a new generation, a remake, a reboot, a sequel, it's all three, and it's terrible. But so entertaining for some bizarre reason. Over articulate teens run around and get slashed up by a killer while the audience chortles guffaws and tries to puzzle out who the killer is. This Scream is no different than the other Screams structurally speaking. It is more "hip" and self-referential though. The fake-out intro gets repeated three times in the movie. That's a lot. Plus, the overly articulate teens get to pontificate about the regurgitation of horror tropes in a post-Scream world. Yes, the teens themselves point out how tired this is, and we're supposed to laugh and say, "oh yeah! it sure is!"

Scream 4 is well shot. It has some laughs. It has some scares. And the reveal of who is the killer - while illogical - is shocking. But it's the killer's motivation that's utterly disturbing. It feels like the writer, Kevin Williamson (of Scream 1 and 2) is angry at the world. It's not the reviewer's job to guess at the screenwriter's psyche, but I got a very angry vibe from the whole thing. I'm not sure why, Williamson himself ushered in the whole self-aware horror craze. He has pretty teens go on diatribes about horror, and I'm not supposed to think Williamson thinks these things?

I mentioned it was entertaining. Yes, unfortunately, it is. This is the guiltiest of guilty pleasures. At least the first Scream was genre-defining and genre-defying. At least it was intelligent and well-written. It influenced a whole generation. What does this new Scream have to say other than horror movies are all retreads? Scream 4 has nothing intelligent to add to the horror canon. It's simply a self-aware remake with an illogical ending that doesn't play by its own rules. The end is unfair. Plus there are a million characters to keep track of so it could have been anybody.

A bolder Scream 4 would have had a less politicized ending ("who do I have to kill to be famous?") and a more meta ending. Kind of like Craven's own New Nightmare, which still stands as a) a scary horror movie and b) an intelligent look at the gripping nature of horror movies. If Scream 4 didn't have an agenda, then I might have enjoyed it a little bit better. Perhaps the end of Scream 4 could have positioned Gail or even Sidney not as reactive victims but as proactive vigilantes. Surprisingly, the second Saw film does this to great effect and within the bonds of its own themes. If the theme of Scream 4 is recast our roles, then it missed the mark. Other than shuffling around a few stereotypes, Scream 4 says nothing articulate about rewriting our own history. The best it can say about not allowing ourselves to be a victim is when Sidney chases after the killer without any backup, but this is a motif taken from the third Scream movie. It's been done before.

However, mentioning that it has been done before doesn't excuse the tiredness of the setup or the plot. I realize it's almost asinine to expect Scream movies to bring something new to the table considering they are the melting pots of the horror world. But that takes away from the original's freshness and uniqueness. Adding more Screams to the pot simply weakens the tastes and turns my stomach, regardless of how well it's shot or how scary it might be. I expect more from a Scream movie than this and all I got was pretty teens getting cut up.
Posted by matthew.