The Spy Who Came in from the Cold 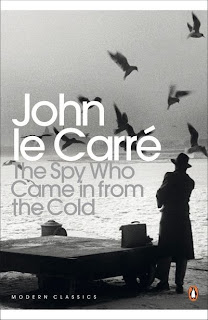 Alec Leamas is a burnt out spy, the head of operations in West Berlin, shortly before the completion of the Wall. After one of his agents is killed on his way over the border, Leamas is sent back to London to be quietly retired in a series of desk jobs. But one day, Control, the head of the Circus comes to him with one last mission, afterwards, he can come in from the cold and peacefully retire.

There are some novels out there that once you read them, you get depressed because you know that no matter how long you write and how well you think you'll do, you will never be able to write anything as good as this one book you just read. The Spy Who Came in from the Cold is one of those books.

I said in my review for A Most Wanted Man that the game the spies are playing wasn't complicated enough. This book? It's the opposite. This is one of the most complex and convoluted books I've ever read and my edition has no more than 190 pages. That's incredible. Within a small novella, Le Carré creates a spy novel morally murky and complicated. This is the best spy novel I've ever read. Yep. I said it.

What makes it so good is of course, Le Carré's prose. As usual, his way with words is unmatched. He's such a strong prose stylist. Every single sentence flows nicely and it's all punctuated with strong and utterly unique dialogue. Nobody speaks in a boring way.

Plus, Le Carré isn't doing any old spy novel. He's doing something that changed how people look at spy organizations. Both the Circus and the Stasi come off looking as pretty much the same, morally speaking. The ending of the novel is devastating and says something rather shocking about the institution of spying. It's well done.

This novel is practically perfect. One can feel that it was written in haste, with feverish speed. I read it in two sittings and I was simply enthralled the entire time. This is exactly why I read spy novels and this is why I'm glad I tried again and again with Le Carré. He's a master of the spy novel. This is a short review because I can't think of anything to say about it other than I love this book. So there you go.
Posted by matthew.