You know how I am sometimes: I stumble back into a genre I've stayed away from too long and then I'm trying to read a whole bunch by different authors. I just finished a spy kick, and now I'm looking into a police procedural kick. Instead of writing a thousand words about individual releases, I'm going to do a triple review, covering The Anniversary Man by R. J. Ellory, Echo Park by Michael Connelly and Bloodline by Mark Billingham.

All three have something in common: serial killers. Yes, the most overused villain in modern literature/cinema is here, and in spades. Ellory's novel follows the sole survivor of a serial killer as the survivor helps the New Jersey police with a new rash of serial killings. Echo Park has Connelly's Harry Bosch uncover evidence of a cold case he worked on thanks to a serial killer who was randomly picked up with body parts in his van. Bloodline features DI Tom Thorne as he investigates a serial killer who is targeting the families of survivors of another serial killer.

The first thing to mention here is how much of a debt these books owe to Thomas Harris' Red Dragon and Silence of the Lambs. Without these two books, I don't think the modern police procedural would have anything to say about serial killers. Or rather, the serial killers wouldn't nearly be as sick and twisted as they are. I read both of those books while in high school, and I can guarantee you that my memories do better justice to the books than a re-reading would do. I fully expect neither of them to hold up to scrutiny. However, that being said, they're both ripping good reads who have influenced countless novels and films thanks to their depiction of the modern, crazy serial killer. 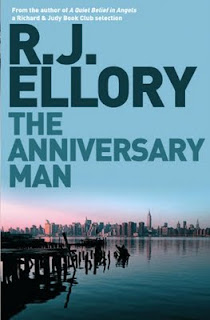 These three books approach their subjects in completely different ways. The Anniversary Man has a sprawling cast of policemen, reporters, civilians, and politicians. Its scope is far bigger than one would expect from the synopsis on the dust jacket. Instead of a thriller concerned with catching a crook, Ellory depicts a modern city, struggling with the media, struggling with society's perceptions of a police force, struggling with the budget and finding the funds to even puts cops on the case. I'm hesitant to compare The Anniversary Man to the Wire, but there is some echoes of the TV show. Ellory's detectives aren't super geniuses who create connections from nothing; they are men with too much on their plate. 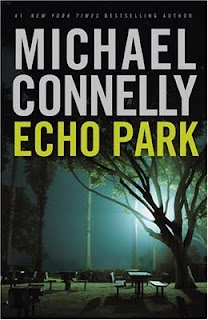 This theme is picked up slightly by Echo Park. Something that modern mysteries tend to forget is that detectives are often working on multiple cases at the same time. Harry Bosch is working a few cases at the beginning of the novel, but of course, when the plot finally clicks together, all reality is abandoned for thrills. Echo Park starts off with tons of promise, though, which makes the final half of the book so disappointing. Instead of a whodunit, the mystery is more murky as Bosch doesn't really believe the story he's being asked to swallow. The serial killer offers to show Bosch where a body is buried, but things do not add up, making Bosch question if the killer even did this particular murder. There are some interesting ethical questions raised about helping the killer lower his sentence from death to life by cooperating with the cops, but again, these bothersome quandaries are swept away in response to suspense and limited action scenes. Of the three books, Connelly's novel is the most "American" feeling. It's airport fiction. 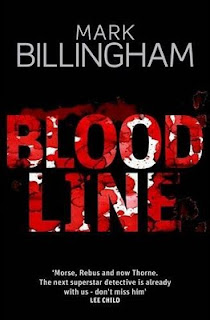 Mark Billingham's Bloodline is also airport fiction, and my criticisms and praise of it are tempered by that sobering fact. Bloodline is a fantastic read, quick and enthralling. It's almost admirable that Billingham succeeds so well at simply telling a good yarn. His fundamental storytelling skills are strong, and it's nice to read a cracking good thriller that's just simply well done. Its aspirations aren't high, but it manages to reach its goals. Whereas Ellory's novel was concerned with the reality of a police force investigating a killer straight out of Hollywood nonsense, Billingham's novel is concerned with the reality of killer with Hollywood designs. The killer in Bloodline thinks he's going to create a masterpiece, and he certainly tries, but in our world, he's just another name, another killer, another sensation to be forgotten. What remains are the families, the victims, the cops, which is far more true in a humanistic sense than the killer.

Interestingly, two of the three books speak disparagingly of the serial killer subgenre of mystery. More specifically, both Billingham and Ellory have unkind things to say about collectors of murderabilia, about the press' obsession, and even civilian's fascination with serial killers. Billingham takes some pages to have Thorne critique the true crime bestsellers that capitalize on the victims' suffering by wallowing in the celebrity of serial killers. Ellory tries to remind us of the cost that murderabilia has on the victims, and the lasting damage that serial killers cause.

It should be no surprise that the two writers interested in deconstructing this subgenre are British whereas the American writer only wants to tell a story to pass the time. If Billingham's goals are low, then Connelly's are subterranean. His novel was easily the worst I've read in the past month, although this isn't to say that the novel is terrible. It's simply mediocre. The prose is stunningly simple, and Connelly's narration always has to step in and hold the readers' hands, although his characters should be able to handle the heavy lifting themselves. It's a shame because the book starts off with such style and lightness. Harry Bosch, and the secondary characters are well drawn and feel alive. When Connelly brings in the ethical dramas and the hand-wringing, it's good. The novel comes alive when Bosch begins the interrogation of the caught killer at the halfway point of the book. Everything is exciting and the reader wonders where it's going. Unfortunately, it's headed right into illogical territory.

There are two different endings to the whodunit of serial killer subgenre: the revelation that it was somebody the reader already met (see Peace's Red Riding Quartet), or it's a completely random character never introduced before (see Seven or Pelecanos' The Night Gardener). All three novels have different approaches to their reveal. Billingham has the team figure out who the killer is about halfway and then it's a matter of how will they catch him. The other two are whondunits of the classic sense. Both Ellory and Connelly keep the true nature of their killer a mystery up until the very end. They end in opposite ways: one is somebody you suspect, the other is somebody the reader never met and couldn't possibly suspect. However, both Billingham and Ellory ground their works in logic, in detection, in classic mystery rules. Connelly plays fair the entire time, but the solution to his mystery is so far fetched and so unrealistic that it begs the question if Connelly even had the solution when he started the book or if he just made it up along the way, without a thought to logic?

Something that all three novels do not share is the serial detective. Harry Bosch and Tom Thorne appear in multiple novels, having adventures and solving crimes for dozens of books. Ellory's a bit of a lone wolf. He has not written any other book like this one. His other novels remain in the crime or mystery section, but follow different interests and characters. He has written no other serial killer book. The serial detective can be an interesting animal, if the character is interesting in the first place. Marlowe, Poirot, James Bond, Holmes, Kenzie and Gennaro, these are all fascinating people, captivating due to their quirks or their charisma. Both Bosch and Thorne are fairly well drawn and both authors are strong in creating depth. Billingham couches Thorne in domestic problems whereas Bosch is grounded in tension with the administration. Of course, as the most American of all three novels, Bosch is the first to disobey orders and go maverick, altogether annoying and unrealistic. Regardless both remain strong protagonists. If Ellory wrote another novel featuring his New Jersey detective, I would read it. He reminded me somewhat of a Richard Price character.

Connelly's Echo Park was okay. The second half and the illogical ending pretty much make it a no go for me. I don't think I'll be reading another Harry Bosch adventure for awhile. However, Billingham's Bloodline made me excited for his other books. Allegedly, the first two are near masterpieces. Ellory's novel had some dialect issues, as Ellory is not a native of New Jersey; he is English. Some of his characters use phrases and words not commonly used in America, such as fortnight and mobile. Other than this, I forgot most of the time that Ellory is not American. I will take a look at his other books, but selectively.

Overall, I'm pleased with the three novels. All were easy ways to pass the time and engage me as a reader. I feel the need to read "trash" before university starts. At least the "trash" I'm reading does what it does well. I like the way they do business.
Posted by matthew.