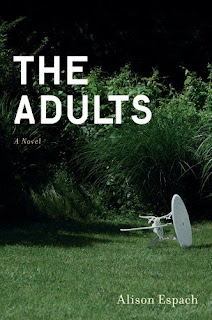 Emily Vidal is a regular fourteen year old growing up in affluent Connecticut. Her mother and father is possibly getting divorced and her friend Janice is telling her that she's sleeping with the handsome and young teacher they call Mr Basketball. However, it turns out that it's Emily who has begun a relationship with the teacher, irrevocably changing her. Covering Emily's life from her first sexual stirrings to her 26th year, The Adults examines the fine line that separates the child from the adult.

I confess. I picked this novel up because the author and I are the same age. I started reading it hoping that it would be terrible, that the prose would be flat and the themes juvenile. I hoped that I would feel better about not being published and this author was. Unfortunately, that was not the case. Rather, Alison Espach, with talent and skill, blew my socks off. If this isn't one of the strongest debuts I've ever read, I'm not sure what is.

I've mentioned before that first novels often feel like short stories strung together. The Adults does not. This novel is singular in its vision and scope. It's a wide range of events and people, but it never loses sight of its protagonist, often too smart for her own good, and her complicated relationship with a man ten years her senior.

Luckily, Espach never comes down hard on one side or the other on this issue. It's simply a heartbreaking tale of the complexity of emotion between two people over time. The author never comes out and says that this sexual relationship with Jonathan, the teacher, is a negative thing. Neither she nor the protagonist ever admit that maybe it wasn't for the best. It just happened and that's the way things go. However, that's not to say that there aren't negative consequences. Every relationship Emily shares has changed, now coloured through the lens of this prolonged love affair. If it's even love. Emily seems to swing slowly between either side of this as time goes on, never deciding if she truly loves Jonathan or if it's simply infatuation.

It's a very complex and sensitive subject, but the whole novel deals with it with tenderness and sensibility. Espach never talks down to her audience, letting Emily narrate and obfuscate her true emotions. She tells it through a veneer of tangents and overly detailed descriptions of other people and other things, heartbreaking moments that hit the narrator far more than she lets on. It's stunningly astute novel, filled with perspicacity and humanity.

It's also a novel that seems to speak to me a lot more than I thought it would. Yes, this is another rich white person's novel, but it's so emotionally raw and real that I could get past it. It's also a glimpse into another person's mind, a mind so well drawn and detailed I suspect some element of autobiography. This is a portrait of a girl wanting to grow up and pretending to be a grown up, but she's always going to be a little girl.

If there's any issue to take with this novel, it's that any time Jonathan is offstage, the narrative spins its wheels with little vignettes of Emily's current situation and how withdrawn she feels. The emotional disconnect is purposeful, no doubt, but it echoes back to the reader. For example, after graduating high school, Emily moves to Prague with her father, her half-sister and Ester, her father's girlfriend. We're subjected to fifty pages of Emily feeling empty and aimless and Emily providing tidbits about how clever and cultured everybody in her house is. It's somewhat tedious and all it does is highlight how vapid Emily can be without any emotional grounding. Thankfully, each time, Jonathan returns into her life and provides the narrative some forward momentum.

As well, there's a lot of perceptible artifice with the characters. While the emotions might ring true, often Espach has the characters speaking in an all too clever manner, saying random things and witticisms, the point of which is to highlight their emotional disconnect, but again, this echoes into reminding me that I'm reading a novel. I can feel the author's hand in the characters.

Other than these details, this novel is strong and confident and powerful. I wish Alison Espach all the best and I eagerly anticipate her next novel, which can only improve on such a strong debut.