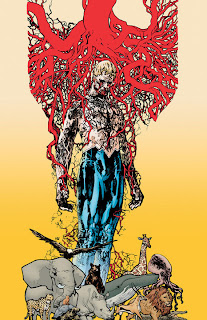 I love love love Animal Man the character. Not just Morrison's take on him, which is iconic and trendsetting, but Delano's horror take and Tom Veitch's spiritual take. Love Animal Man. There's something so irresistible about Buddy Baker, maybe his trippy powers, maybe his everyman status, or maybe even the fact that he's married with two normal kids. I was pretty interested in Jeff Lemire's take on him, not only because I found Essex County to be fascinating, but also because that cover! That cover is amazing! It's like somebody finally understood why Bolland was so good as his job.

But alas, all is not meant to be. In terms of first issues, Lemire manages to succeed on every superficial: he introduces an established character, gives enough background for us to understand him, and then gives us enough action to understand his powers and to keep us entertained. Then, there's a trippy dream sequence, which strongly reminds me of previous Animal Man-style stories, and then setup for the rest of the arc, including a pretty frightening cliffhanger.

Why then my disappointment? Oh god the art is awful. Just fucking awful. Look at this page layout and tell me that this guy isn't working with a full set of tools, specifically the fucking panel at the bottom. It's three separate images put together and not even in an artful way. Also what is Buddy Baker wearing? 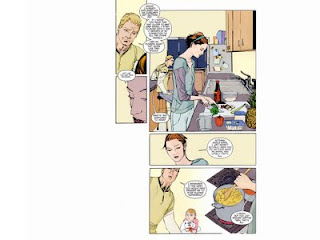 Okay so that's a bad page. Does this artist have any grip on human anatomy? Nope. Did he design a costume that looks eerily like electric Superman? Yup. Here's proof of both statements with this full page splash panel: 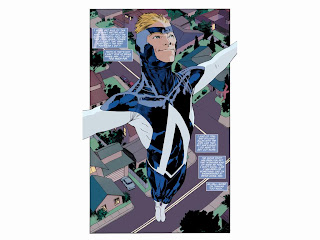 Oh god my eyes. What's with his neck? What's with the bizarre perspective that skews the bottom half of his body? AAAGGGHHH

It's a shame because that cover is miraculous. Plus, the dream sequence is pretty well drawn. I think this artist does better with photo-reference than with drawing from imagination. There's nothing wrong with this. I think he should stick to his strengths.

As for the writing? Yeah, it's good, but it's not great. It didn't blow my mind, but sometimes it takes a bit for the writer to get a feel for the character and put their own stamp on it. I feel like Lemire expects that readers expects these kind of stories: trippy philosophical and weird. I think it fits Animal Man better than standard superhero fare. I just fear that we're going to have retreads of Veitch's or Delano's runs.

This wasn't nearly as harrowing as the first issue of Justice League. I have little to add to this review other than "can this artist please get better?" I think he can improve and I don't want to see him off the title; I want him to grow and mature as an artist. Let's hope this title continues!
Posted by matthew.

I lost your email when The Projector email addresses were "misplaced".

The new one is arts@theprojector.ca.
Send me an email if you want to continue doing book reviews for the paper.

Thanks! And the blog looks good.