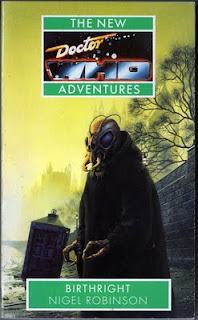 Look at that cover and tell me it doesn't make you want to read it. This might be the best cover painting yet - although there are many more books to come. Not only is this a fantastic cover painting, but it's also a pretty fun romp.

Benny has found herself in London, in 1909, with a dead TARDIS sitting on the banks of the Thames. All that she has is a key to the TARDIS and a key to a safe deposit box in a bank, set up by a Doctor John Smith. She must figure out where the Doctor is, where Ace is, and why women are being brutally murdered in the alleys, with the witnesses claiming large insectoid features.

Meanwhile, on a barren world in the far future, Ace finds herself sitting next to a dead TARDIS and no other clues. She gets whisked up in a guerilla resistance movement against a race of sinister-looking insects who are harvesting humans for protein. However, she encounters a mysterious man who knows more than he should about the TARDIS, a man who is helping the insects with some vast time-spanning quest.

This is said to be the first "Doctor-lite" novel in the New Adventures line, something that the New Series picks up on, like for example Turn Left or Love and Monsters or even Blink. I was not really looking forward to this book as I thought that a) Doctor-lite episodes are weak and b) the book could never live up to the promise of that cover-painting.

Luckily, the book does. Sure, there are a couple missteps - Nigel Robinson isn't the world's greatest prose writer - but the use of time travel is cleverly done, and he picks all the pieces separate as long as the plot needs them to be. Birthright has a plot that reaches thousands of years, with elements of Kublai Khan and Elizabeth I and even a young farmboy in twelfth century Scotland and it could get out of hand very quickly, but you feel the presence of the dark manipulative Seventh Doctor that I'm such a fan of. This is the Doctor at his most scary because he seemingly put the pawns in place so long ago.... Of course, this could all be tedious if it wasn't for Robinson shooing the reader along, asking them to ignore the heavy narrative straining at the seams of plausibility.

The worst part of this novel is that the climax features another dream sequence in which all the symbols are irritatingly laid out for the reader. We saw this before in Timewyrm: Revelations and in Transit (although this was virtual reality, but it's really the same thing), but this time it's Benny versus a crazed cult leader who is attempting to control the TARDIS. There's all sorts of symbols and even a serpent which echoes so many meanings. I say that this is the worst part because it lasts so much longer than it should. There's no danger either, because each time Benny is killed within the dream, the TARDIS seems to resurrect her. Plus, on top of this, the method by which the villain is defeated has nothing to do with the dream sequence. It merely happens and the plot moves on.

It's unfortunate, because the coolest scene in the book, in which the insects inevitably begin to invade Edwardian London and attempt to slaughter everybody, is glazed over in a matter of pages. Some police show up, gunfire is brought forth, and insects rip people apart. This scene, which sounds fucking brilliant, is only about three pages. The dream sequence? Twenty. Ugh. There's no justice in the world.

Other than these two problems, which aren't insurmountable, Birthright is a very enjoyable book. In "far-future" novels such as this one, usually it's fairly tedious watching an amateur build a world from scratch (see Robinson's previous Timewyrm: Apocalypse) but Robinson wisely keeps it low key and fast - extremely fast. Birthright flies by in a short 216 pages, but I think it could have been just a titch longer - just a titch. Any more and it would have stretched my patience.

This book is as good as Shadowmind was tedious. I thoroughly enjoyed this book. Also, and this might have contributed to my bias (and my patience), but Birthright has the honour of being the first Doctor Who novel that I have read in actual physical form. Previously, they were ebooks, but I recently got my hot little hands on 19 paperbacks, all in decent condition. This might have helped me enjoy the book a little bit more. Maybe not. Who can say?
Posted by matthew.