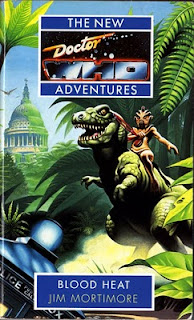 The TARDIS malfunctions and deposits Bernice into the time vortex, while crash landing in a tar pit, leaving the Doctor and Ace confused at why England's buildings appear to be covered in a jungle, and dinosaurs roam the land. When they meet up with an older, more focused Brigadier, they are told that this trouble, the Silurians reclaiming the Earth, this trouble started with the death of the Doctor over twenty years before.

So begins the New Adventures' Alternate History arc, which continues loosely for the next four books. As for the beginning of an arc, as for the novel itself, this book is a stunner. This book has everything.

Not only does it feature dinosaurs (look at that cover!) but it features dozens of species: ground herbivores moving in herds of thousands, Silurian-mounted pterodactyls getting into dogfights, Sea-Devils leading giant aquatic monsters. Okay, so the dinosaurs are fucking cool, and there's an alternate timeline plot. It's like the book is tapping into my childhood. What else is there?

For a good portion of the first third of this novel, I had no idea how it was going to be 300 pages long. I didn't think there was enough plot to manage this, and that the author was going to have corridor-running scenes for 150 pages. But Mortimore does an interesting thing. In the first third of the novel, he sets up a rather large cast, moves them across the board, foreshadows some of the stereotypical crazy Seventh Doctor ploys, and then has an epic huge gunfight to close out the first half. And by epic huge gunfight, I mean it's fucking crazy. It's on the scale of the most blistering and visceral levels of Call of Duty or Crysis 2. This battle features airships, divebombing dinosaurs, the Brigadier manning an anti-aircraft gun, people yelling, and all sorts of chaos and violence. It's heart-pounding. It works entirely. And it's only the first half of the novel. This scene would work as a climax to a shorter work, but Mortimore has other plans.

After this battle comes to a conclusion, Mortimore ups the stakes, increases the danger and pushes the pieces into place for an ending that's so outrageous and so grand that it's almost guffaw-worthy. The end of the novel features huge metropolises under siege by thousands of mind-controlled dinosaurs, more aerial battles, and a submarine with nuclear missiles being attacked by Sea-Devils and aquatic dinosaurs. Plus, on top of this, Bernice is on a suicide mission to destroy the submarine. At the same time, Ace is exploring a volcano to find the body of the Third Doctor and recover the husk of this timeline's TARDIS! Okay, if that isn't enough, how about this? How about an epic showdown between the Doctor, the Brigadier and the leader of the Silurians in the top of a citadel overlooking the whole battle?

OH - MY - GOD. This is as epic as Doctor Who stories come. I have yet to read or watch anything on this scale. I think it's the size of the story that impressed me so much, that and the nostalgic factor of dinosaurs. The scale is unprecedented it seems, and this is commendable in of itself. This isn't a book of subtle characterization or careful nuanced development of relationships - although Mortimore handles the friendship of Ace and newly introduced Alan in a rather unexpected and tender way. Rather, Blood Heat is a novel of plot. It's the kind of novel that Tom Clancy or Dan Brown would write, but unlike those authors, Mortimore doesn't get bogged down in technical details or even modernity; this is a novel that tries to excite the reader by any means necessary, and if you end up caring for a few of the characters original to the novel or if you end up caring for the cast as a whole, then it's simply a byproduct of the plot. That's not to say that Mortimore doesn't pull off all of these things. Other than a slow beginning, Mortimore succeeds in writing an effective and gripping thriller. It's heartpounding and pulseraising. It's exciting.

Plus, Mortimore gets to play with all sorts of themes and murky moral dilemmas. The Silurians were the original owners of Earth and it belongs to them, in a way. But doesn't humanity have just as much right to the planet as they do? Of course, the book gets into more than simply elementary moral dilemmas than the one I just presented. There's even some personal morality dealt with: Bernice threatens to kill herself and the submarine in order to prevent more death, but she never thought herself as somebody who would die for an ideal. She and Ace struggle with the Doctor's "mission" if that mission itself is morally good or not. Of course, this comes to a head, and echoes many themes and issues brought up by other New Adventures, namely, can you trust the Seventh Doctor? Does he care about humanity at all, or is it some galaxy-level game of chess?

Yes, the New Adventures begin to darken perceptibly in theme and situation with this novel. If the New Adventures books weren't already dark already, that is. Deceit and Love and War begin to set this up, and Blood Heat is a logical outcome of this. And it's well done. The reader has never been more ambivalent about the Doctor before.

Obviously, I loved this book. But that isn't to say that there aren't problems. The first 100 pages of this book are interminably slow and somewhat opaque in revealing information. While this opacity is normally admirable, a little exposition never hurt anybody, I think. Plus, the pace is languid, introducing a bunch of similar-seeming characters, bringing in alternate versions of Jo, Liz, the Brigadier and even Sargent Benton. There's a lot of setup, and yes, it does have payoff in the end, but it's tedious to get through the first third of the book, unfortunately. This isn't insurmountable, as I persevered through it and reached an ending that exceeded my expectations.

Blood Heat is impressive in scope, scale and imagination. Often, these New Adventures remain steadfastly obedient to the structure of classic televised serials. You can imagine the cheap rubber suits on the villains. Blood Heat, and a few others, are in the minority, books that want to explore whole regions of the universe and story. Just the size of the story alone, contained in a paltry 300 pages, is commendable. I loved this book. This excitement I'm experiencing is the reason why I'm reading these books in the first place.
Posted by matthew.