Day of the Daleks 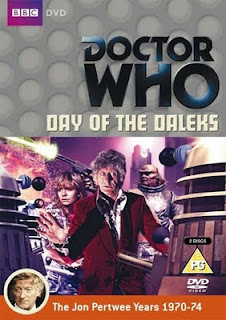 When a mysterious soldier tries to kill an important diplomat, UNIT sends the Doctor and Jo to investigate. They find remnants of future technology, as if the soldier was from the future. The diplomat is attempting to broker peace between the UK and China, and if he fails, it could mean war. Or will it? The Doctor gets sent into the 22nd century where it seems the Daleks have conquered all of Earth and it's all because of this one diplomat. Will the Doctor be able to save the present and the future?

This is the first Third Doctor serial that I have watched in its entirety. I've given up on a couple other serials from his era if only because they're... not very good, I guess. Lots of camp, lots of karate(?) and lots of frilly frocks and velvet dinner jackets. But this one, I chose this one specifically because of a couple reasons.

Firstly, it's one of the few Classic serials to truly use time travel. Although the TARDIS makes only a limited appearance, there is ample time travel, with both Jo and the Doctor going to the future and back, and even crossing over into their own time stream - which is a subplot that's tragically forgotten by the third and fourth episode. Day of the Daleks is also notable for its first appearance of the Daleks in over five years and the first mention of the Blinovitch Limitation Effect, a very nerdy storytelling function that explains why a time traveler wouldn't be able to mess with his own timeline.

On top of these very important elements is the temporal paradox that exists at the heart of this serial. The guerrilla forces from the 22nd century have come to kill the diplomat because history tells them that the diplomat sets off a bomb killing his fellow diplomats during an important conference, including himself. History remembers this diplomat as attempting to seize power for himself, but miscalculating the bomb's timing. The guerrilla soldiers therefore go back in time to kill the diplomat before he has a chance to set off this bomb. Of course, the Doctor realizes that the guerrilla soldiers were always a part of the timelime: they set off the bomb and destroy the conference, leading to the conditions in which the Daleks take over Earth. It's their own fault.

This is an intriguing and fascinating paradox. When thinking about time travel, it's always good to remember that things will always happen and simply going back won't change the fact that it has already happened. Just because your perspective of the events might change, from history's perspective, it remains that way. It's complicated, and this is what excites me about time travel.

It's hard to judge this episode for not fully developing on this idea. First of all, the budget was ludicrously low. The producers only had access to three Daleks, which does not make for an impressive ruling military presence. Plus, their sets of the 22nd century were pretty much just parking garages and the studio set done up with tinfoil. Everything looks cheap. And the ultimate showdown between UNIT and the Daleks isn't very impressive.

But this is the 2011 critic judging a forty year old television show that had no access to computer effects nor the giant budget that the BBC hurls at modern Doctor Who, with the word giant being extremely relative. Therefore, we must judge Day of the Daleks on the criteria of its story and acting rather than its pedestrian special effects.

Largely, it succeeds. It's a rather tight story except for the dangling plot thread of two Doctors. At the beginning of the serial, the Doctor and Jo are mucking about with the TARDIS when suddenly, a second Doctor and second Jo show up. As a learned reader and watcher of time travel fiction, I assumed this was proper setup for a payoff later in the serial. Unfortunately, this never happens. We have to assume that it's one timeline having a brief intersection with another alternate timeline. It's never explicitly laid out.

Strangely enough, when the Doctor manages to save the present and change the future, there's very little mention of how he is able to change the future so easily. There's no consequences it seems. Instead of simply saving the world from the Daleks, he has, for all intents and purposes, wiped out from existence a whole planet, billions of people, and replaced with a world where Rose Tyler will eventually grow too small for her epic teeth.

Other than the philosophical ramifications, this is a pretty ripping good Who yarn: there's a few sweet laser battles between dog-men who look like Klingons and the soldiers, a pretty badass showdown between the Daleks and UNIT (most of whom are cannon-fodder), and the Doctor has a rare moment where he uses a gun and blasts the Klingons into nothingness. Yes, that's right, the badass Dandy Doctor uses a gun to up and murder some bitches.

One of the other reasons why I chose to watch this serial is that the special effects have been given an upgrade thanks to the BBC. For the DVD release, they hired an FX team to add some Daleks, improve the time travel effects, improve the laser battles and, to top it all off, had the iconic voice of the Daleks record new audio, replacing the original one with a more consistent voice. The absolute best compliment I can give to the team that did this, and I'm sure they will appreciate this, is that the special effects are seamless. It works tremendously. It improved and enhanced my experience and I'm sure that's the point. I wish they would do this with some more budget-constrained serials. It would make things a lot more interesting.

Day of the Daleks is a pretty hardcore Who serial that's fun, mind-bending and features a Doctor who isn't afraid to get his hands dirty. Highly recommended.
Posted by matthew.