Fall on Your Knees 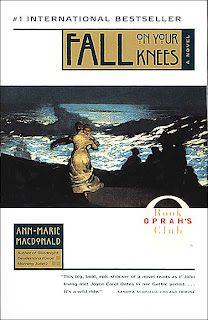 [Note: I read this novel for school, and any and all novels read for school will be tagged school. I mention this because being told to read something will colour one's perspective of that novel. If I seem unduly harsh or even apathetic, this might be because of school's influence]

[Note 2: This is a novel about secrets. I'm going to spoil everything. Do not read if you wish to avoid spoilers for this novel, which I encourage you to do]

Fall on Your Knees charts three generations of the Piper family, living in Cape Breton from the beginning of the twentieth century through both Wars and the times between. There's James, patriarch and a man who considers himself morally good, above his fellow men, there's Kathleen, the beautiful eldest daughter who dreams of being an opera singer. There's Mercedes, pious and devout, believing only in the power of God. There's Frances, a girl searching for meaning and goodness when all that is taken away. And then there's Lily, salvation and mystery or just a normal girl?

Let me say right from the outset that while I wanted to hate this novel, eventually I developed a grudging respect for its construction. That being said, this respect never evolved into admiration or fondness for this over-long mess of a novel. Fall on Your Knees suffers from numerous problems, the first of which being that it's just too damn long.

Perhaps we should start with why I ended up respecting the novel. Firstly, it's beautifully written. Ann-Marie MacDonald's background is in poetry and the composition of plays, so her prose is tempered by both delicate beauty and efficiency. However, and this is a strong however, this works only in the short term. When given the large canvas of a novel, MacDonald becomes too bogged down in the fecundity of her language. Scenes repeat and overstay their welcome, despite their prettiness.

Secondly, MacDonald's structure, which I disliked and will attend to in a moment, creates bookends, both of which are incredibly moving, fascinating and beautiful. The opening section, in which MacDonald sketches both the town of New Waterford and the two parents, is fast, bravura and extremely deft. The final section is a perfect novella on its own. Yes, perfect.

The final third of the novel is epistolary, taking the form of Kathleen's diary. Rewinding the narrative's clock to 1918, we follow Kathleen to New York, before she became pregnant out of wedlock, before she was brought back to Cape Breton to give birth and eventually die from the trauma. In 1918, she is taking singing lessons from a world famous teacher, who is accompanied by Rose, a mixed-race woman who may or may not be a musical savant. MacDonald skillfully plays with our expectations: we know Kathleen becomes pregnant, but we do not know by whom. Kathleen thinks that she falls in love with David, a soldier, and she ends up having sex with him. However, David goes off to war, and Kathleen's period makes its monthly return.

So it is not David. Instead, Kathleen slowly falls in love with Rose, told in the most beautiful and tender and gorgeous prose, not prose obsessed with similes and metaphors or metonymy. Instead, the power of this budding love affair comes from its simplicity and its honesty. We believe in the love because it comes from a place of truthfulness, which makes it a minority in a novel of dark secrets, many of which were revealed at the climax of the previous section. So Rose and Kathleen fall in love, become lovers. Of course, it ends badly.

James catches wind of this through an anonymous letter writer, and he comes to New York, rapes his daughters and impregnates her. We find out that Lily is not only James' granddaughter but his own daughter as well. This theme of incest was laid down in the first section of the novel, so it's not too much of a surprise. This section works not only because of the emotional suckerpunch of James' rape, but because of the beauty the rape destroys.

The third section could stand alone as a novella and I would have called it perfect. Unfortunately, it comes at the end of an incredibly long and painfully tedious middle section that runs around the same few points over and over and over and over again. MacDonald has Frances and Lily repeat the themes of the novel ad nauseum, all with the same repeated scenes and same repeated close careful prose. It's tedious because for 200 pages the novel goes nowhere. We learn nothing new of the characters. Instead, it's groundwork for more themes and secrets.

Fall on Your Knees is a thematically rich novel: music, incest, the nature of storytelling, the myriad ways love shows itself, race, power, war, economics. If I had to write a paper about this novel (which I will end up doing), I can honestly say I won't have trouble finding anything to talk about. And MacDonald gives us so many easy quotes because the characters just keep telling us.

In the middle section, which seems interminable, Frances becomes a child prostitute, giving handjobs and stripping in a speakeasy while James brews liquor for that same club, not knowing what his daughter is up to. Meanwhile Mercedes thinks that Lily is destined for sainthood so she starts saving up for a trip to Lourdes to possibly cure Lily of her limp (brought on by infant-era polio). Mercedes goes a bit squirrelly. Lily on the other hand is precocious and irritating in that way that child characters often are in novels. There's a ton of references to Jane Eyre and more references to jazz and music than you can possibly handle. What does it mean, this middle section? It's meant to highlight perspectives and conceptions of morality within the characters. They cogitate on the idea of good while things go bad in the world and in their lives. Or whatever. It means a lot, and it's all weighty themes because MacDonald's novel has no sense of humour whatsoever. This is a relentlessly dark novel, dark enough to be oppressive. There is not a single moment of levity. When there is a moment of possible humour, it's always in the context of sexual abuse or violence, so one cannot possibly laugh.

This novel desperately needs two things: the aforementioned missing sense of humour, and secondly, a fucking editor. We could easily cut one hundred pages out of the middle section, which creep dangerously close to magical realism: Lily's twin brother, who did not survive birth, becomes an almost spectral character. Lily never fucking shuts up about Ambrose. Never. It's exceedingly annoying. Yes, I fucking get it, MacDonald, stop grinding my nose into your lofty and pretentious themes.

Fall on Your Knees is clearly a first novel. It's an attempt to be everything to every reader. But it also feels like a checklist. As if MacDonald thought to herself, "hey I'm going to write The Great Canadian Novel, what are the stock elements I'm going to need?" And then she decided to set it in Cape Breton. For the reader, this translates to a reference to a church within the first five pages. MacDonald delivers, bringing a reference to a mine and a church in the third paragraph of the prologue, which is irritatingly titled Silent Pictures (get it?????? Yes, thank you, I get it). MacDonald then proceeds to tick off all the elements of the Canadian novel: isolation, the weather, incest, religion, and the barrenness of family, which is all reflected in the fucking weather.

It's not that I hated this novel. It's just that I hated reading it. I could go on writing about this, but I'm going to have to write 1,000 words on a minor character for an assignment due in two weeks, and I'm going to have to write about this book for the final exam. So I'm going to stop here and simply say that this novel needs an editor and a sense of humour. If the novel didn't try so hard at being important, I might have liked it a little bit more.
Posted by matthew.

I see the merits of your criticism, however I disagree with them. I had a grandfather from Cape Breton who very closely mirrored James (he was actually WORSE) and I can tell you that she did not arbitrarily pick the setting. There is an unfortunate number of abusive families in that region in the exact same situation as the Pipers. The lack of humour is a mirror of how people in these abusive families live in an unstable and marred family environment that ruins them as much as it gives them fleeting happiness. You need to understand the context of the novel to understand why it was written that way, and unfortunately many cannot.

While I agree that context is important, it is not everything to the text. I can still find a novel to be tediously written even if it has a high level of verisimilitude. A text can be true to life and still manage to fail as a text.