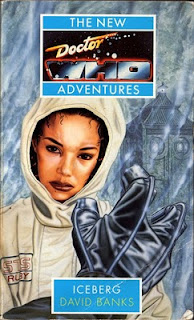 It's 2006 and Earth is dying: overpopulation, pollution and the magnetic poles threaten to reverse at any moment. The UN has an Antarctic base, researching into reversing the reversal of the poles. Ruby Duvall, journalist, is sent to record the ultimate moment of triumph. Unfortunately, everybody runs into a) the Doctor and his broken TARDIS and b) the Cybermen, who are picking people out of the ice base and depositing them into Cybermen suits.

What a weird novel. I don't mean weird in the sense that the going-ons in the book are weird; I mean that the novel's construction is worth noting. David Banks isn't really an author. He's the actor who played the Cyber Leader in the 80's. With this background, it's almost like Banks has a possessiveness about the Cybermen. He translates this into a pretty decent chronology about the Cybermen up to this point; he explains the failed invasions and history of the Cybermen from their perspective, which would be different than the Doctor's perspective which is nonlinear to say the least. It's all very fascinating, and Banks manages to integrate this massive amount of exposition without tiring the reader.

But that's not the weird part, the fanwank continuity, I mean. What's weird is this bizarre sexual subtext running through the entire book. It's so very subtle that I'm almost convinced that it was subconscious on the part of the author. I'm going to give a bunch of examples, some with page numbers, some without. [Note, I'm copying and pasting from my own posts at the Gallifrey Base forum]

We watch Ruby, the protagonist work out, and observe her muscles rippling under dark skin (a paraphrase). We also see her scantily clad while her friend Leslie barges into her room, kisses her and "pats her thigh" while she tugs her T-shirt down to "cover her bum". There's also a terrifically exploitative scene in which Ruby, after a workout, gets naked and then gets stuck in the shower stall. We barely get into Ruby's head as a character; we simply watch her.

Not only is the reader being invited to be a voyeur. The general at the base listens to a couple have sex. She watches them touch each other in that intimate way that couples do. Of course, in the general's case, it's more that it's in disregard of rules and regulations, rather than in the context of sexual voyeurism. However, this extends further when sex scenes between these two (who just signal cannon fodder to me) are detailed.

On page 184: "Lord Straker was peeping between a gap in the curtains" and then further on page 185: "There was an eighteenth-century courtesan sporting such extensive décolleté that her entire bosom was exposed to devastating effect." There's another reference to Ruby being half in half out of her suit. When they arrive back on the ship, someone sees her and thinks the words "skimpily dressed" or something to that effect.

Now, obviously, I'm taking these things directly out of context. Regardless, the reader is often positioned as the watcher, observing these people, specifically Ruby, but instead of focusing on details of character, Banks focuses on details of her body, her skin, her muscles, her lack of clothing. This doesn't change the overall experience of the novel, to be fair, but it did pull me out of the narrative often.

In terms of the actual plot, the novel suffers and benefits from the desire not to reveal too much too soon. Yes, the Cybermen feel all the more powerful and scary when they're used sparingly in the first half of the novel, but Banks uses the same hands-off approach to the Doctor, who doesn't make a full appearance until the halfway point. Banks is surprisingly effective at creating tension within the narrative by holding back the Cybermen. He slows everything down conversely by holding back the Doctor.

When Banks does use the Doctor, he uses him in a more Mister Miyagi kind of way. That is to say that during Ruby's physical journey, she also undergoes a figurative journey of self-discovery. She reads the Tao and studies an Eastern fighting/meditating thing which is modeled on Tai Chi (which in classic Chekhov-style, she uses to beat up a Cyberman later). This journey of self-discovery is amplified when the Doctor shows up and speaks mostly in aphorisms. The pragmatic reason for this is so the Cybermen won't understand what he's saying but Ruby will. Which is fine, but as a reader, it's somewhat groan-inducing. Eastern philosophy is being implicitly compared against Western philosophy in this novel, as Banks brings in a lot of themes about humanity and cybernetic possibilities. While Banks obviously loves his Cybermen, he ends up concluding that a life of logic and survival at all costs is no life at all.

Now, you might think that I'm reading too much into Banks' novel and motives, that Iceberg is simply an adventure romp featuring classic villains. Unfortunately, I am not. Banks has an amateurish habit of having character announce the themes. When Ruby finally comes to her epiphany (in the literary sense, not religious), she declares that she thought she was an iceberg, holding all those emotions below the surface and revealing nothing. I guess the reader is supposed to be impressed that Banks connected the title, the setting, the plot and the characters in one word. It'd be impressive if Banks hadn't bent over backwards pointing it out to us.

I'm complaining a lot about this book, but that doesn't mean I didn't enjoy it. It's still a rather fun little Who adventure that features some pretty high stakes elements and a neat little chronology that takes into account the Doctor's nonlinearity. It's also nice to get a Doctor that isn't too powerful. He gets cold just like the rest of us.

Iceberg is a decent, but far from perfect New Adventure. In the history of the Who novels, apparently this is the last in a short string of terrible books, which changes direction with the next novel, one that features an alternate history arc. Yay.
Posted by matthew.