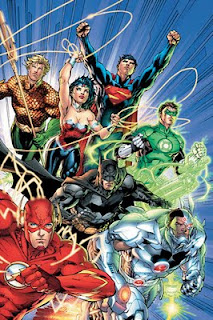 Welcome to the new DC Universe. I'm not going to spend oodles and oodles of words reaming DC out for such a bold tactic. In fact, I'm going to carefully compliment them on the brazen move. It's not very often that decades of stories are wiped out in favour of a fresh start. Just the ballsiness of it is inspiring. But what's replacing those decades of continuity? What stories does DC think is worth 2.99 or 3.99 (American)? They announced a few months ago that everything would restart with number ones, beginning with their flagship title, Justice League, this time, written by Geoff Johns and drawn by Jim Lee, both of whom are A list celebrities in the minuscule world of comic books. The most exciting part of this reboot is the same day digital release that DC is promising. In terms of economics and business, this is what excites the company. For me, I'm more interested in seeing what DC does with all these fresh starts? I don't plan on reviewing or reading each and every single issue that comes out of the new Universe, but I do plan on reading a select few titles, including Animal Man. So let us begin with issue one of the new Justice League.

Batman is on the run from the cops while chasing some mysterious villain who has been planting bombs around Gotham City when Green Lantern shows up to help which Batman didn't need anyway. Whew. What a sentence. That breathlessness characterized in that sentence is the same of this issue. There's not a lot of plot, but there is a lot of momentum. Batman runs, Hal Jordan makes some pretty constructs, they receive a hint that this creature is assembling a boom tube and then they go to Metropolis to fight Superman. Didn't I call a moratorium on Superman/Batman fights about three years ago? Regardless, Geoff Johns thinks that this is what new readers want.

Interestingly enough, I disagree. I think readers of a comic called Justice League want a comic starring the Justice League. In typical 21st century style, Johns is going to use 6 issues to tell a story that could have been told in one. It's called decompression and it's a blight on comic books. It's a plague that tortures readers and rewards the wallets of the corporations.

In twenty something pages, Johns manages to only introduce four major characters, one of whom receives only a one page splash panel, highlighting his "new" and "improved" costume. Four characters. Three if you don't count Superman's last page appearance. And with those twenty pages, all we know is what Jordan and Batman and other characters tell each other. We know Batman likes fear because Jordan tells us. We know Vic, the future cyborg, has daddy issues and loves football because anonymous speakers tell us.

There's a fine line between making sure the audience keeps us and simple exposition. In other words, there's showing and there's telling. Justice League #1 is an exercise in how not to manage this fine line. Johns, apparently a professional writer, goes out of his way to explain that superheroes haven't been around long, scientists are studying them, the government doesn't trust them and regular joes love 'em.

Not only does Johns use decompression to tell a boring origin story of the Justice League which will take no doubt four to six fucking issues, but he uses no point-of-view characters and doesn't show what the comic book even promised - the fucking Justice League.

If someone had asked me, "hey, what do you think the worst way the first issue of Justice League could've gone?" this is exactly what I would've said: have two characters talk for 15 pages and then for no logical reason get into a fight with Superman just so readers can see Batman and Superman fight again for the six millionth time.

There's one bright spot in this dark heart of poor storytelling: the scene in which Batman "lifts" Jordan's ring while he's wearing it and figures out how it works within seconds. That's Batman to me. That's perfect characterization. That tells me all I need to know about Batman. Anything else is superfluous in a "first issue" kind of story.

The use of humour was also welcome. While it was disappointing to have two characters talk for 15 pages in a comic called Justice League, it was heartening to have them banter, with some modicum of humour. There's too much darkness and gore in comics these days. I welcome with open arms an injection of levity. Let's not forget that kids read these things.

Of course, a lot of comic book critics are going to say, "you nerds aren't going to give this reboot a chance! You're going to scoff and criticize and be overly negative." This is no doubt true. However, I had hoped for something exciting and continuity-lite. I had hoped for a great entry point. I did receive a starting point, that's fair to say. However, I'm supremely disappointed in the amateurish and fumbling way it was delivered. I retain some measure of hope for other first issues, including Morrison's Superman and Lemire's Animal Man. Some of these comics appeal to me based on the attraction of a) talent and b) light continuity.

Otherwise, Justice League #1 was a pisspoor introduction to the new universe. I didn't get any sense of scale or freshness or anything. It felt like the same old DC but with newer shinier costumes and characters who don't remember anything that I've read and spent my money on.

I wish I didn't sound bitter. Let me reiterate: I don't hate the idea of the reboot. It's ballsy and I think it's going to help tons of new readers enter the world of comic books. In fact, just yesterday, I tried to help my friend figure out where to start with X-Men comics. I was at a lost. Should he start with the new X-Men in the 70's, or try and stick with the 90's when everything was at its most iconic? At least with the reboot, we'll all know where to start. It's just a shame that the very first issue was without any excitement or sense of awe that comes with superheroes.
Posted by matthew.