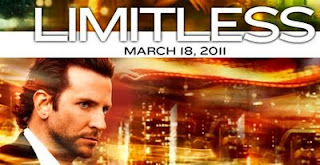 Bradley Cooper is a writer with writer's block, but one day, he runs into an old friend who hands him a pill that unlocks the other 80% of the brain we supposedly don't use. Bradley Cooper finds himself smarter, more confident and without... limits. After finding a large supply, Bradley Cooper makes a lot of money and a few enemies, including somebody who may know more about the drug than he does.

Limitless is an American movie, in the sense that Bradley Cooper actualizes the American Dream. Let's start off by defining the American Dream. It is, for the sake of this review, to make something from nothing. This is different than alchemy: the American Dream is to pull one's self up by one's own bootstraps and make one's way in the world whereby the end result is the twin pillars of America, money and power. In Limitless, Bradley Cooper actualizes the dream of both money and power, but never reaches an end point. That is to say that his potential is... limitless.

In the beginning of the film, Bradley Cooper is dirty, appears to have a broken finger (that the film does not comment on or provide any explanation for its appearance and subsequent disappearance), and is a writer. Of course, "writer" is another way of saying "unemployed" in American film language, and of course, "unemployed" is another way of saying "poor" or in Marx's terminology, the proletariat*. Bradley Cooper is poor and dirty and without prospects. That is until the mechanism for the plot and for Bradley Cooper's meteoric rise through the classes is introduced: a drug dealer with something called NZT.

This drug, synthetic and chemical in nature rather than organic or naturally occurring, is able to unlock the potential of the human brain. According to this drug dealer, humans only use about 20% percent of our brain** and this drug is able to break this limit. Bradley Cooper takes this drug, because there is really no option, and he is able to use memories that are stored within his brain but were previously inaccessible due to inactivity. He uses this power to deflect and then impress his landlord's caustic wife. This translates into Bradley Cooper bedding this woman and then the film subsequently drops her without any explanation or followup.

After taking more of NZT, Bradley Cooper cleans himself up, cleans his apartment, and purchases new suits; the motive being to portray himself as upper class as to ingratiate himself within their ranks. His subterfuge is impeccable thanks to NZT's confidence boosting and intelligence increasing, but he finds the spectacle of the bourgeoisie to be empty. Therefore, he concludes, he must become them, and in archetypal American fashion, his next move is to understand then conquer the stock market.

The impenetrability of the stock market is a cliché that permeates American fiction. It is confusing and mercurial and only those with highly specialized education can possibly make any progress in the market, unless of course you are either a risk taker of epic proportions (see films such as Wall Street) or you are a savant. In Limitless, Bradley Cooper is positioned as savant via NZT. Within days, he has exponentially increased the seed money which he borrowed from a stock Eastern European gangster***.

Bradley Cooper attracts the attention of Robert De Niro who hires him to help facilitate a macro-merger between two corporations that deal in energy and power. De Niro, the self-made owner of one of the two companies, positions Bradley Cooper as consultant with De Niro as the father figure, the mentor of the younger more brash protagonist.

From here, Limitless examines concepts such as addiction and power, both addiction to power and the power of addiction and it looks at these themes through the lens of the techno-thriller. However, what makes Limitless so archetypal and perfectly "American" is that its story is so simple and so demonstrably American: Limitless is the story of the self-made man. However, what makes Limitless so interesting is that the film positions a pharmaceutical drug as the mechanism for the self-making.

Limitless tells a story that has been told many times before; one such story being Vanity Fair by William Makepeace Thackeray or even Bel-Ami by Guy de Maupassant. In both of these novels, the protagonist (not necessarily the hero) is motivated by upward mobility on the social ladder and this is usually done by either marriage or in Bel-Ami's case, wiliness. Both books were written in the age of the Industrial Revolution, a time of great social upheaval. While the face of the ruling class changed from nobility to industrialist, the ruling class remained that: ruling. The difference between the proletariat and the bourgeoisie was clear and often easily identifiable****.

Bel-Ami and Vanity Fair (to a lesser extent) have the same story as Limitless, except Limitless uses a quintessential and very culturally relevant mechanism: the drug called NZT. Only in the 21st century would the story of class mobility, the primum movens of the story, be NZT.

In a lot of American fiction of the 20th century, the illusion of the American Dream is offered to the protagonist and by proxy the audience. There is a chance, however small and fleeting, that the reader could one day rise above their class and become one of the ruling class. The fantasy of the American Dream comes from obscuring the rigidity of the class strata. Limitless is the perfect example of this. The agency of veiling the class distinctions is pharmaceuticals. There is no more quintessentially American device.

In the 19th century, the illusion of blurring classes came through inheritance or secret family wills or more often than not, through the sheer persistence and determination of the protagonist, often a ragamuffin orphan or ne'er-do-well. Now we have come to the 21st century, a time of great economic hopelessness*****, where Limitless asks us, the audience, to believe that
one of the few ways to increase our lot is to self-medicate.

There is no doctor or pharmacist or even chemist who tells the audience that this self-medicating with NZT is inherently dangerous. The film shows us scenes of addiction and withdrawal, but then the film asks us to forget these not-so harrowing scenes because, in quintessentially American fashion, the end justifies the means. There isn't any question of what this drug is doing to Bradley Cooper's brain. There isn't any repercussion or consequence outside of material wealth and increased social standing.

What kind of film is this? What kind of message does this send to the audience? This is surely an escapist fantasy designed to bait the audience with the illusion that through science fiction, the audience can also better themselves and rise up through the ranks of society. Fantasy being the important word here. While Vanity Fair and Bel-Ami and countless other famous stories are heralded for their measured and even examination of the "self-made" man or woman, Limitless doesn't belong in their ranks. This film has nothing to say of the consequence of Bradley Cooper's actions or decisions to self-medicate and become, essentially, a long term addict to an illegal drug.

There's an interesting moment around the halfway point of the film that bears looking at. After suffering intense withdrawal, Bradley Cooper endangers his girlfriend by involving her with the drug. Bradley Cooper urges the girlfriend to take the drug in order to escape a pursuer. The next morning, once Bradley Cooper has had his fix, he tells her that he is going to handle it, that she is out of danger, (even though she just ingested an illegal substance) that he's "back". She asks, "Who's back? Because it's not the man I knew." The idea being here that NZT has ultimately changed Bradley Cooper the person, fundamentally changed who that person is.

At first, the film sort of positions this moment as a question of addiction and identity. Is the person as an addict merely a consequence of the drug, or is the drug simply exposing the addict as they truly are. After the theme of addiction is put down and set aside, the film never explicitly revisits the concept of identity again. Instead, the film asks the viewer to forgive this suppression of the true Bradley Cooper because at the end of the film, he is far more rich and powerful than expected, and that there is no limit to his potential, an idea explicitly referred to by a couple characters.

In the end, the film asks of the audience, it is completely worth it to change who we are in order achieve the American Dream. What the film is sort of hinting at, implicitly concluding, is that in order to achieve the American Dream we must fundamentally change who we are. These two things are not quite the same thing; one is much darker than the other. Limitless is the story of the self-made man who changes himself irrevocably into an ideal, of a paragon of progress and success. What the film doesn't do is ask us if a lifetime of addiction, fear and protean identity can justify the end result.

NOTES
* I fully admit to reductionist practices and oversimplifications, but this film is guilty of the same crimes which I feel justifies my tactics

** Of course you know that this is a myth. I shouldn't have to link to any confirmation of its mythic status and I won't. I refuse to. Anybody who looks at an MRI or CAT scan will see the brain lit up like fireworks, constantly exploding and neverending (until brain function ceases due to injury or death)

*** This plot point will inevitably come back, of course, but in a way that is both frustratingly predictable and somewhat surprising.

***** Many Americans live beyond their means thanks to the debt culture that has become naturalized and internalized by the constant media exposure of the rich and famous.
Posted by matthew.