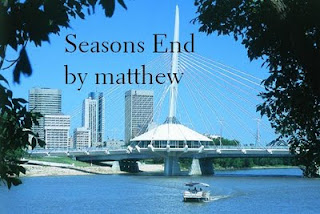 So watch the old world melt away
A loss regrets could never mend
You never miss it till it's gone
So say goodbye, say goodbye
- Marillion
Summer of 2011 has ended, and it has been magnificent. Not just the weather, but my life. This has been one of the best summers of my life - maybe not the very best, but definitely in the top three.

The end of summer is often seen as a sad event, a transition to colder temperatures, school, the leaves falling off the trees, but I'm seeing this as the finale to a long stretch of wandering, searching for what I really want to do, and I think I've finally found the answer: what I wanted to do for years - get my PhD. This summer was the period at the end of a five year sentence, and it was a fantastic end.

Really, the beginning of the summer was the end of exams, moving out of my apartment, and into a new one, and then a trip to Kelowna BC for my grandfather's 80th birthday, which was a fun celebration. We hiked up a mountain. I got sort of drunk. I ate delicious salmon and avocado, as if they were both harvested that very day. It was fun to take a vacation for the first time since 2008, other than a terrible camping trip in 2010 which I'd much rather forget, honestly (everything was so fucking damp). It was even fun to take an airplane, a convenience which has ameliorated since the last time, I have to say. There was a screen in the back of every seat that charted our progress, provided altitude and weather information, and an estimated time of arrival. It was excellent. I read Stendhal's The rouge et le noir over the course of this trip.

I went back to work at Moxie's - normally I would say this is a step backward, and really, the whole summer was about stepping backwards, but at least this time, I really like my job. The crew in the kitchen is phenomenal, and I don't dread going to work. The kitchen is full of some of the wittiest people I've ever met, and I feel like I always have to stay on my toes in terms of comedy. Working at Moxie's is always going to be frustrating; the company makes some boneheaded decisions sometimes, such as the new veggie burger which contains rice, cottage cheese and mozzarella (I know, right?). But at least, I like the people. It's fun working at Moxie's again, even if that means a different location.

I moved back in with my parents. Definitely not ideal. But sometimes you have to take a step backwards in order to take a couple steps forward. They're letting me live relatively rent-free. They re-did my bathroom and my bedroom, so it's not entirely the same. Life is different. My parents are a lot happier and relaxed nowadays. I think they like having me around. My bedroom isn't as full as it used to be, thanks to the mass selling of my stuff, which makes the room feel bigger than it used to be.

Plus, it's nice getting away from the old apartment, a place of strong memories. As much as I loved the apartment, everything that I associate with it is just too much. I needed to get away from it. So I moved in with somebody else, which was okay, not bad but not fun by any measure, and then now into the parents' house. It's nice having pets and it's nice having access to all the amenities of a house, like a backyard and a large kitchen.

Other than the current situation, this summer featured the Pride Parade, which is in my top ten favourite fun things I've ever done. I had such a blast. I was really drunk and I was checked out by numerous guys and girls! I got my new favourite sunglasses there, which my mother hates, and I got a whole bunch of memories. It was awesome. The drinking didn't really stop there, either. I did lot of a partying with friends and coworkers over this summer. In the past two years, thanks to a not-so-healthy relationship, I was adverse to going out because that always meant my ex would become rowdy and drunk and annoying - "do this shot" "chug this straight vodka" as if the only way we could have fun was through copious intake of alcohol. But since I became single, I've been going out a lot, hanging out with people, getting tipsy. I got blackout drunk once or twice, which is fine with me, but not all the time. It was nice, letting go and being social. I don't think I've been this sociable since my previous breakup in 2008. I even went on a road-trip to Minneapolis with some friends.

I dated a couple girls. Neither of them worked out if only because I felt nothing for them. They were rebounds, honestly. After the second girl, I figured that I should just stop trying to date entirely and let whatever happens happen naturally. I found that the minute you stop looking for something is the minute before you find it, so I'm just going to coast amicably with myself and continue to work on the project that is me.

I weighed 178.5 pounds this morning. I feel fat and have been for a couple weeks, but I'm not sure why there is a disconnect between my mental image of myself and my actual presence. I've been eating poorly the past couple weeks but exercising a bit, so I think I'm losing muscle weight and gaining fat? Maybe? Or is there a cognitive disconnect between what I think and what I am? This is intriguing stuff. I thought I weighed 195 or 190, but the digital scale refutes this mental estimation. I know enough about psychology to figure that my mind is playing tricks on me, the kind that causes other people to develop serious body-image issues because all they ever see is fat when they're actually dangerously underweight. I'm not saying this is going to happen to me. I'm saying that I simply need to maintain an active and healthy lifestyle, including exercise and diet and with time, my two images will reconcile.

I think it's wonderful that over the course of the summer, not only did I manage to maintain a numerical weight goal, but I also managed to make new friends, be extremely sociable and read an incredible number of books. I read over 50 books since the beginning of May. A lot of people won't even read 50 books in their lifetime. I have eight books that I have read but haven't yet reviewed for this blog. Eight! The backlog is stunning. I never thought I would get to the point where I couldn't keep up on the blog end of things, where the reading would over take the writing, but here I am. I think it's amazing that managed a balance of friends, responsibilities, and pleasure. I went to the gym, read, went out and worked sometimes all in the same day. This is a big difference from where I used to be a year ago.

Now that university is about to start tomorrow, I'm about to finish the goal I set on Goodreads of 85 books in a year. At my current pace, I'll surpass last year's total no problem. I'm fully prepared to have my reading speed reduced by the onset of academic reading and assigned books (which still count as books read, I'll have you know).

University is going to be different this time around, I think. First of all, I'm smarter, older and more mature. I won't be as arrogant or as annoying. I plan to make friends. I plan to make important connections that will help in the future. I think I'm going to get a lot more out of school this time. I also need to get all A's across the board in order to increase my already decent GPA. I can do all this. I can manage this. I'm taking three honours courses and two undergrad courses, which is a lot, but I think I can do this. I'm excited and nervous about school. But I'm walking into these classes with five years of autodidacticism and a degree. I'm going to be older than most of the kids, and I'll have read a lot more than they have in the past five years... on average. I don't think I'm better than everybody, I just think I have the benefit of experience.

This summer has been fantastic, and it's time to close this particular chapter in my life. I wanted to capture that elation I feel, that excitement about the possibility of the future. I'm still looking forward to whatever happens, and as long as I can manage my weight, my social life and my real world responsibilities than everything is going to be okay. I've capitulated to the ongoing tension between what I really should be doing (PhD) and what I have been doing these past five years. This summer was the perfect climax to this wilderness of aimlessness. I couldn't ask for better friends or better times or better weather this year. I can't wait for next summer. I can't wait for the rest of my life.
Posted by matthew.