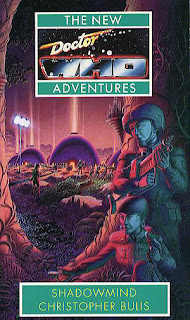 Ace grinned ironically. 'We do seem to find any trouble that's going spare, don't we? Or perhaps trouble finds us.'
'Like cosmic lightning rods,' Bernice suggested, then frowned. 'Have you ever wondered, Doctor, if it is just chance? I mean the number of these experiences you keep getting into. . . '
'Don't be coy, call them adventures,' Ace cut in.
'. . . these adventures, then. The number does seem to stretch the rules of probability somewhat. Have you ever wondered if it isn't always chance?'


Shadowmind is a short but tedious book, and there are only a few moments of intelligence in the novel. This is one of them. The Doctor's explanation isn't nearly as delightful as the question posed by Bernice. This short of sums up my feelings about this novel.

Ace realizes that it is her birthday by her own personal clock, so she asks the Doctor to take them on vacation. The TARDIS lands on an idyllic planet in the future, but it appears that certain people have been replaced by duplicates, all scheming to steal equipment for nefarious reasons and take them to Arden, a forest planet being colonized. When these duplicates end up stealing the TARDIS, the Doctor is forced to get involved, vacation or no.

I'm not going to lie and say that I have any idea what to say about this novel. It confounds me. The plot is very simplistic, so it's not because of complexity that I find myself at a lost. Nor is it the themes or character development, which there is very little of. No, I'm finding it hard to think of something to say about this book because it's so stubbornly mediocre. If we took all of the Virgin New Adventures, gave them average scores based on hundreds of readers, we would no doubt see a Bell Curve of scores, with the majority of novels being somewhere in the middle. At the very center, right in the middle (I took Statistics, but I forget what this is called) would be Christopher Bulis' Shadowmind.

The plot seems more interested in the military than in the Doctor being clever or Ace being badass or even Bernice being clever. It also takes the plot more than half of the novel getting the cast to the planet being colonized for the action. All the little pieces that Bulis introduces in the overly long prologue-ish first few chapters come back for a payoff, but since I have no idea what is going on, and I don't really care about this characters, all of whom are thinner than parchment, so this payoff lands with a soft dull thud.

However, and this is what confounds me, the plot comes to a shrill climax in which some sort of bog stolen from the film Fern Gully makes its appearance. Everybody's screaming, things are happening, and then the cast piles onto a spaceship and travels to an asteroid. It's here, at this moment, that Bulis finds a moment of brilliance. Through intense and preposterous telepathy, the big bad manages to mind control the cast, with the exception of Ace, who then has to shoot them in order to save the world. This moment for Ace takes its cue from the previous novels, in which the badass Ace shows either no emotion or too much. It's an emotional payoff to a longer arc. It works.

I'm not sure if I should be ascribing success to Bulis, who manages the moment of excellence, or to the previous writers who have put all the pieces in place in order to create this moment later down the line. Or if it should go to the editors. Either way, this is the only part of the novel that works.

The list of problems continues with Bulis' novel, however. There's far too much exposition, and in addition, it's done so clumsily. One imagines that in his original draft, Bulis couldn't help himself and wrote "and then" between every paragraph. It's all very amateurish.

There's not too much to say about this novel. The asking of the question of the Doctor's capacity for trouble is far more interesting than Bulis' pedestrian answer, which isn't even really the point of Shadowmind. I just wanted to demonstrate that Bulis could never fulfill the expectations of such a loaded question.
Posted by matthew.