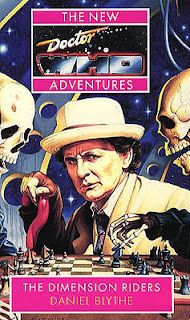 While Benny is relaxing in twentieth century Oxford, the Doctor and Ace find themselves on the hunt for a spectral figure that only Ace saw, intruding in the TARDIS. It takes them to a dilapidated space station, surrounded by the dead. However, the Doctor gets thrown a week back in time and Ace gets arrested by an investigating search party. It seems that somebody is playing with time again, and it all something to do with the Doctor's past.

On a few Doctor Who fora, I have been arguing in defense for Steven Moffat's "timey-wimey" approach to the new series. Not only is it clever, but when you do time travel stories, when you become God, you have to think non-linear. Time isn't a river anymore. The Dimension Riders kind of picks up on this theme slightly. The villain of the piece, the Garavond, is a creation of the Doctor's meddling in time, and receives his power from paradoxes. So whenever the plot requires the villain to get scarier, the author inserts a paradox. It also serves, paradoxically, to explain how things happened in the novel.

Which is helpful, because the first half of the novel is fairly boring and seemingly endless. In Oxford, Benny hangs out with some hawt student who coincidentally becomes integral to the villain's plot later, but before that, they're busy running around while a hawt chick in skintight clothes drives a Porsche and seems to know a lot about TARDISes. The audience is left unsure of its connection with the 24th century action on a space station, but we trust that the author has some sort of idea what he's doing.

Meanwhile in the 24th century (cue the Superfriends woosh noise), Ace and her new friend from the search party are beginning to get persecuted by these ghostly soldiers who are able to de-age you into a baby (maybe not the worst and most intimidating threat the author could have picked), but this is where the novel decides to become philosophical. Time itself becomes a weapon. And no, not in the figurative sense. The Time Soldiers, as they're dubbed, wield guns that use Time as their ammunition. When Strakk, Ace's new friend, gets too close to a Time Soldier, his hand is brutally injured by Time itself. I'm not quite sure how this works, but I'm willing to go along with it, if only because the author's prose and cast is fairly strong.

Daniel Blythe, the author, has a very good grasp on his overall cast. Each character is well drawn, including the characters who are destined to be cannon fodder (as per a lot of Who stories). The relationship that grows between Strakk and Ace (while reminiscent of Ace's growing friendship with another doomed fellow in Blood Heat - surely coincidental) is extremely compelling. When faced with ultimate destruction, Strakk reaches out to wrap his arm around her waist, Ace acquiesces and it's beautiful and tender. It's definitely moments like this that resonate with the reader, beyond the usual Who stuff that draws them in.

And that's all here as well. The Seventh Doctor is at his most Seventh-y, if you will. Even on the cover, the darkness and manipulation are hinted at, as he is over-seeing a game of chess. This theme, while used previously, is brought to the forefront. Blythe shows off his knowledge of chess by having Benny recognizing the sacrifice of the TARDIS by the Doctor as a classic chess move in which the player loses their knight but gains the queen, or something like that. Later, in a virtual reality-esque climax, the Doctor sees a chessboard, with a game in progress, but no players, and yet he immediately recognizes the paradigm, and names the famous players who helped usher it in.

If the chess metaphors weren't enough, the tension growing between Ace and the Doctor seems to come to a boil here. In the same aforementioned virtual reality-esque climax, Ace chooses to shoot the Doctor in order to stop the madness, but luckily, it's all part of the Doctor's plan. Ace is becoming disillusioned with the Doctor's games and manipulation and it's starting to take its toll. But you notice I've said this before. This theme, brought up ad nauseum by the New Adventures, is becoming slightly tedious. It's time for a climax, instead of constant simmering tension. This can only go on for so long. It stretches credibility with Ace as a character. Is she just going to lay down and take it for another dozen books?

However, this is an editor-targeted complaint rather than an author-targeted one. The problems we can lay at the author's feet include the aforementioned boring first half, when all the disconnected pieces seem so widely divergent. As well, I don't think the book is as clever as it thinks it is. The Garavond's existence is chalked up to someone messing around with the Doctor's timeline, but its ultimate origin is explained in a weird way. Something to do with the Matrix on Gallifrey and a piece of the Doctor's mind? It's confusing and somewhat irritating. I didn't understand its power, or why, with something so inherently powerful, it would need to humans... and then why go ahead and shoot a bunch of people? If you needed them, why would you kill them? The Garavond's plan is exceedingly complex and stretches across time and space, but only to trap the Doctor? How did it know that the Doctor would be in Oxford at that time? Also, the plant of the android assassin and the renegade Time Lord in Oxford of 1993 is exceedingly convenient enough to stretch credibility again.

I still enjoyed myself, I guess. I never felt compelled to read this. I finished it out of duty and because I still have another 35-40 books to go in the series. This is damning criticism, unfortunately. While the actual reading experience wasn't good or bad, the fact that I had to force myself to sit down and read it like a textbook is a poor reflection on the book. But, like I say, I still had an enjoyable time, especially at the climax of the book, which is a fairly strong example of how to pace things at the end of a story. Other than that, I thought it was a fairly pedestrian and mediocre read. But not terrible.
Posted by matthew.