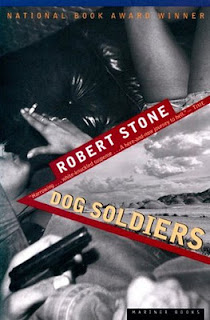 John Converse, journalist in Vietnam, decides to buy some raw heroin and then employ a long-time friend, Ray Hicks, to smuggle it into the US and into the hands of Marge, John's wife. Of course, it goes badly, and some definitely violent and scary men come after Ray and Marge. They book it to a former hippie commune site and wait while those violent men torture Converse and bring him to the inescapable showdown.

It's inevitable that books that I'm desperate to get my hands on will ultimately disappoint me. Dog Soldiers, by Robert Stone, is a National Book Award winner, and one of the few that I so desperately wanted to read. Unfortunately, it's scarce and not available in my library. I didn't think that it was worth eBay-ing, so I resigned myself to waiting until I one day stumbled across it (I carry a mental list of books whenever I come across a store or a garage sale - it's just statistics that one day I'll find it). My school library, of all places, turned out to carry a copy - not just any copy, but a third edition of the original hardcover, with its pleasing-to-the-eye typeface and its garishly yellow hardcover (the dust jacket is missing, and presumably discarded, the modus operandi of my school library it seems). So I immediately took it out and set to work reading this. But would the experience of reading the book compare to the experience of hunting the book?

Alas, not really. It's unfortunate, because the premise is just so exhilarating: drug deals, Vietnam, burned out journalists à la Graham Greene, shoot-outs and a fairly pessimistic view of hippie culture. It's also a novel about the disillusionment with the government, with the war, with the counter-culture, with modernity. There's a lot to like in the promise of this novel, and it gets there... mostly. A lot of my favourite themes, wrapped up in a neo-noir plot, and critically acclaimed (also made into a movie). So where did the novel go wrong?

It's certainly not unambitious; Stone takes the reader from Saigon to San Francisco, and some rather shady places in between, introduces a medium-sized cast, and puts in some serious narrative time sketching out his three primary characters. The unfortunate part is that all three remain ciphers, regardless of how much background information and characterization the novel invests in them. The single most vivid character is one of the villain's goons, who gets a chance to tell, in his own words, his story of homicide and subsequent imprisonment. The reason why this character works so well is twofold: his monologue is presented in his own words (which seems circular but still important) and he remains consistent throughout his appearances.

That's the biggest downfall in Dog Soldiers, apart from the oppressively vernacular dialogue. The characters, the three primary owns, do not seem to have consistent motives. The most important part of Converse is when he says that this heroin deal is "the most real thing in his life". Why then does he joke and appear not to care about the fate of his wife or his daughter? Why then does he act incensed in one scene and completely passive in the next? Perhaps this character inconsistency is a comment on the affectations of the characters themselves. Perhaps the novel is trying to say that the cast has no idea what they want beyond the next high. If that's the case, then this point is slightly lost on the reader.

Or perhaps this cast acts weird because they're all so high. This is the first novel that I've read (other than Fear and Loathing in Las Vegas) where the characters just get high and there are no consequences, social or mentally. Only one character, Marge, shows any signs of withdrawal, but her inclusion in the novel speaks wondrously about the female presence in this novel, and agency in general. When I say, "wondrously" I mean that sarcastically. Marge is only a pawn, kidnapped by Ray, who ultimately ends up sleeping with her, his friend's wife, I might add, and Marge never does anything remotely interesting. She's merely the person holding the bag of heroin.

This lack of agency isn't commented on directly by the narrative, but her promiscuity and lack of drive certainly are comments made by the narrative. Marge seems to encapsulate a lot of the counter-culture: her indifference and blasé attitude to drugs, her unwillingness to be conventionally employed or normal, and her definite blurring of marital boundaries. She sleeps with whoever she wants, tells her husband about it, but the novel hints at the emptiness of this direction. In fact, the novel uses some big neon signs to tell us that the counter-culture's approach to life was inherently a failure. One of the bigger scenes in the novel is near the end when Ray and Marge, on the run, end up at a former commune. Dieter, a self-proclaimed God, worshiped (ironically) by Mexicans, has high hopes that Ray's return will signal a like return to the bacchanalia of before. Ray, possibly the only character with his head on his shoulders (until the last thirty inscrutable pages), tells him that those days are over.

This is what makes this book so hard to like. While I respect what Stone was doing with theme and symbols and meaning, because Dog Soldiers is filled to the brim with theme, I just didn't enjoy the book on a scene to scene level. The characters felt hollow (whether or not that is intentional is divorced from my enjoyment of them) and the plot seemed rather stretched out at 350 pages. This should have been a much shorter book; there isn't enough story to sustain so little.

The novel's pointed look at the counter-culture is so diametrically opposed to the nostalgic way we're used to looking at the end of the Sixties. If I might indulge myself with some political thinking, in regards to the Occupy Wall Street demonstration, now in its third or fourth week (depending on who you ask), there are some definite parallels with the Sixties counter-culture. Certainly, if we asked a whole bunch of these protesters, they would look fondly at the past and say that those hippies were real hippies, fighting for what they believed in. Or, these young protesters of today would say that those hippies of yore were fooling themselves, getting caught up in drugs and orgies for the pleasure of it all, rather than the altruistic and political motives youngsters today have. As if there is any difference. Both answers apply to both parties. The 99%, as they call themselves, are just as clueless and formless as the earlier hippies. They have no set political agenda to be legislated. That's the key problem there.

One of the Stone's characters has a great monologue on the foolishness of the average American college student. Everything they wanted, they could have. A revolutionary in the South Americas? Well they want that too. Who is going to tell them that they can't have revolution at all. Even if it's logically opposed to their parents who gave them everything. The futility of their resistance to "the American way" is echoed by the novel, and in some ways, by the Occupy Wall Street protesters***.

This is why Dog Soldiers is easy to recommend as a rich assembly of thematic elements and hard to recommend as a entertaining narrative. It doesn't quite work as a novel, but there is still much to enjoy in the novel's approach to a very turbulent and complicated time in American history. Many modern day hippies would do well to read this more honest work of the dark side of counter-culture than to re-read their tattered copy of Howard Zinn or Abbie Hoffman.

*** Not that I don't fundamentally agree with them. It's just that I can't agree with their lack of organization. There is no clear political lobby here, nothing that can be ultimately written into law. That paints them all with the same brush, unfortunately, because there are some intelligent protesters looking to engage in political discourse in order to ameliorate the economic situation. It's the most ludicrous wishers of economic parity who are receiving the most media attention.
Posted by matthew.