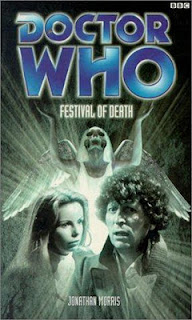 The Doctor, Romana and K9 have arrived at G-Lock, a space station that's also a terminal for a hyperspace tunnel. Immediately, they arrive in the aftermath of great destruction and many people congratulate the Doctor for saving the day. The TARDIS crew conclude that "saving the day" happened in their relative future, and the saved people's relative past. However, the Doctor finds out that in order to save the day, he made the ultimate sacrifice, his own death. In order to figure out what brought about his death, the TARDIS crew must investigate the Beautiful Death, a tourist attraction that promises to kill you and then revive you, giving you a taste of the afterlife.

The Merriam-Webster Dictionary defines "boggle" as a verb: "[to] be astonished or overwhelmed when trying to imagine something: 'the mind boggles at the spectacle'." Now, Jonathan Morris, author of Festival of Death, apparently loves this word. He uses his frequently. So much that I was distracted. The Doctor, specifically the fourth incarnation, "boggles" at everything. There's a lot to boggle at in this book, by which I mean there's a complication in the plot every chapter, and some of these developments are positively shocking. There's plot twists, to say the least, and they deserve to be boggled at. However, Morris could have checked with a thesaurus and found a synonym or two. I found ten. This is a very slight criticism, and one would expect this reviewer to be making much ado about nothing, but this constant repetition of "boggle" sort of encapsulates on a smaller scale the problem with Morris' prose.

In the first 80 pages of this novel, the Doctor, Romana and K9 sound exactly like they do on the television show. One would credit Morris with being able to accurately capture their voices and mannerisms. This is an illusion, however. The author merely repeats the same quirk of character, the most caricaturistic of elements. For example, the Doctor consistently "boggles" at things. Another example would be Romana's constant correction of the Doctor's misstating of the laws of time travel. Morris simply drives this point over and over. At first, these quirks and jokes are amusing and invest the reader into the novel. By the end, the repetition is tedious.

Morris' prose and characterization relies on simplicity and duplication. On the opposite end of the spectrum, his plotting relies on complexity and a lot of attention from the reader. This is easily one of the more complicated and satisfying time travel novels this reviewer has ever had the chance to read, notwithstanding its status as a licensed novel based on Doctor Who. It is a tremendously exciting and engrossing narrative that works backwards, but in ways the reader cannot predict.

The conceit of the plot is that the Doctor is dead in the present, the Doctor's future. So therefore, the Doctor must figure out how to a) cheat death and b) save the day. The audience knows that he will do both, it's simply a matter of how and when. The when being extremely important. When the TARDIS crew arrives at G-Lock, they quickly deduce that they must go back in time. What happens after that is not easily summarized. If fact, to do so would spoil some of the surprises.

Suffice it to say that this novel uses time travel in a logical and consistent manner. There's a comparison to be made with the finale of Series 6, that I previously wrote 1800 words on. Many viewers felt that "The Wedding of River Song" was a cheat or a cop out. I've clearly indicated that this isn't fair or true. If they felt that strongly about the Eleventh Doctor's way of cheating death, they would surely cry foul at the end of Festival of Death. Not only does the narrative ask the reader to believe that the Doctor is dead, but there is some definite misdirection on the part of the narrative and of the Doctor himself. Obviously, the Doctor isn't going to die (especially since this happens before "Logopolis" the serial in which Tom Baker regenerates into Peter Davison). But we're also told that there is no way to change history (even if it's future history) by Romana and the Doctor himself. If the Doctor can't change history and in the future, he's dead, how will he do it?

Both Festival of Death and "The Wedding of River Song" come to their conclusions using a Chekhov's gun and not a deux ex machina (of course your mileage of this statement will vary depending on your definition of what constitutes a deus ex machina in a "fantasy" or "sci-fi" narrative). Both stories play as fair as they can without giving the game away. Both stories include, at the end, an explanation that satisfies why the narrative misdirected in the first place. Therefore, they cannot be saddled with accusations of "cheating".

What Festival of Death has over "The Wedding of River Song" is that the time travel aspects of the novel are far more tighter, which is to say that there are zero loose ends in Festival of Death. No single element that seemed jarring or out of place did not ultimately have an explanation that was cleverly planted previously in the narrative. That's the trick to time travel narratives: being able to sow the seeds and harvest them later. Plus, there's some fun to be had if there's a paradox or two (or in Festival of Death's case: three) in which an effect is its own cause.

Needless to say, I loved this book, despite the weakness of Morris' prose. There were few "clunkers" in phrasing and wording, but one would never characterize Morris as a prose stylist. Happily, Morris' strengths as a plotter more that make up for any deficiencies in prose. The story in Festival of Death is one of the tightest time travel stories I've ever read, and requires some serious work from the reader in keeping up. When things happen backwards and sometimes simultaneously, there's a necessity in paying attention and missing no details. Thankfully, during some of the more complicated sections, Morris provides context and reiterates scenes under new light to explain and keep the reader afloat. Sometimes I needed this help, and I'm a veteran time travel reader. That goes to show how good of a novel this is.

This is my first in the Past Doctor Adventures, and I really enjoyed it. There are over 70 books in this series, not to mention the 40 in the Missing Adventures and the further 40 I have left in the New Adventures. Plus, the New Series Adventures! I fucking love Doctor Who.
Posted by matthew.

Email ThisBlogThis!Share to TwitterShare to FacebookShare to Pinterest
Labels: books, doctor who, past doctor adventures