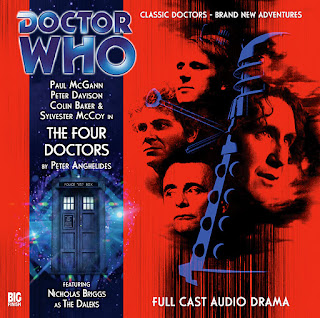 The Fifth Doctor is investigating a science lab in the Vault of Stellar Curios which is leaking chronons (or whatever). This leakage attracts the attention of the Daleks, who want whatever is in the Inner Vault. This leakage also accidentally attracts the Eight Doctor, who sort of remembers this.... When Colonel Ulrik betrays the lab to the Daleks, the Doctor throws him through time, backwards, as there is a larger game at play, across time and space, which involves the Doctor's personal timeline and previous incarnations.

I listened to this Big Finish audio drama because it was a multi-Doctor story, one of few. It also features two of my favourite Doctors, Fifth and Seventh. What I didn't expect was an extremely complicated and coherent nonlinear time travel story. I mention "coherent" because the medium of audio drama can sometimes have a disorienting effect on the listener; if the audience doesn't follow every scrap of information or exposition, they may become lost - especially if it involves the listener trying to wrap their head around convoluted chronology.

The plot is stellar. The Eighth Doctor, with the advantage of seeing this all already, throws the misguided Colonel into a time loop that was caused by Eight suggesting it to Five (who only suggested it because he remembers being the Fifth and receiving the suggestion (paradox!) ). The Colonel and a Dalek get tossed down a time corridor to 1854, where Seven is trying to prevent a paradox with a Prof Michael Farraday. Seven is trying to close a temporal corridor that's allowing things to spill in, such as a destroyed Special Weapons Dalek. He must keep Farraday from realizing the truth. Of course, it doesn't help when Dalek Prime and the Colonel show up. Seven manipulates them into going further down the time corridor, into the historic war fought by the Colonel's grandfather against the Daleks, where they both meet Six.

Of course, if you know time travel stories, you can pick up on all the clues, the Chekhov's guns being put into place. We realize that the history everybody speaks of is actually caused by the people from the future, creating a nice neat time loop, a loop that was already explained. Once Six shows the Colonel the light, he has a change of heart and is sent back to the future just before he left. We find out what is in the Inner Vault - somehow this is surprising even though the piece was put into play earliest in the chronology - and the Colonel makes the ultimate sacrifice by helping the Fifth Doctor create the time loop in which the day is saved.

Hurts your brain, doesn't it? The beginning of the story is the end of the story, but we experience it in the wrong order. This is exactly why I love time travel stories. They challenge notions of linearity and normal storytelling parameters. They are a different paradigm. Although, nowadays, they have so many similar elements that I was able to deduce the overarching idea of the plot basically from the beginning.

This doesn't detract from the experience; it's the journey, not the destination, after all. While I loved the plot, that isn't the only thing to recommend here. Everybody is on top form, especially the Seventh and Sixth Doctors. We all knew that Sylvester McCoy would be an excellent radio personality as his voice is just so muscular and multipurpose, but Colin Baker has really come into his own as the Sixth Doctor. He sounds more wearied, older, stronger and smarter. No longer is he the Doctor with a short temper. He's also far more sly than you'd expect.

Paul McGann as the Eighth Doctor puts in a predictably fantastic performance. However, Peter Davison sounds old and gruff, almost unrecognizable. When he began speaking, I wasn't sure which Doctor he was. His characterization is also slightly off it seems. Instead of the vulnerable indecisive but heroic Fifth Doctor, we hear am impatient and grumpy Fifth Doctor (kind of like his appearance in Moffat's Time Crash). It's not insurmountable; the audio drama remains top notch.

Even the supporting cast does a great job. The Colonel, a complicated character who goes through a rather harrowing and life-altering journey (over and over ad infinitum) is played to perfection. It's a tough character to pull off if only because of the nonlinearity. David Bamber plays the Colonel and he just absolutely nails it.

The sound effects and production level are outstanding. I was at the gym listening to this, and for long stretches of time, I had forgotten that I was running on a treadmill and I imagined myself in the Vault with the Colonel and the Doctor, surrounded by menacing Daleks. It is a testament to their immersive quality that this could happen.

I liked this audio drama much more than the previous ones I've listened to, if only because the plot was a notch more complicated than expected and the cast was incredible. A backwards time loop through his own timeline! It's genius! Go out and give this is a listen, I guarantee you that you'll be riveted.
Posted by matthew.

Email ThisBlogThis!Share to TwitterShare to FacebookShare to Pinterest
Labels: audio drama, doctor who