On "The Wedding of River Song" 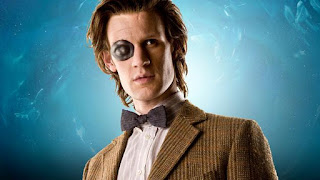 Series 6 of Doctor Who has wrapped up, thus depriving me of Saturday night television until Christmas and then again until August 2012(!). "The Wedding of River Song" was the finale, and breaking with tradition, was not a two-parter. However, in keeping with tradition (of Series 5) it has stirred up no small amounts of confusion and controversy, with some fans claiming it to be a total cheat or a cop-out and thus brings the death knell of Doctor Who while other fans (such as myself) enjoyed it as a great finale to a good season. With this post, I want to address some of the issues I had with a) the series as a whole, b) the finale by itself, and finally c) fandom's divisive reaction to both a) and b).

Firstly, I thought Series 6 was good, but not great. Splitting the series into two halves made everything feel so much longer and that any stand-alone episodes (fairly true to the original DW ethos) were merely stopgaps or filler episodes. The arc, which was set up so admirably in "The Impossible Astronaut", was ambitious, but seemed stretched out. Essentially, a future version of the Doctor brings Amy, Rory and River to Utah where they witness his true death by the hands of an impossible astronaut. By the halfway point of the series, the Doctor has foreknowledge of his death, but struggles with his emotions regarding it. After seeing Amy's faith in him nearly kill her, he bids farewell to his companions and then goes after The Silence who have orchestrated the circumstances surrounding his death, including the kidnapping and brainwashing of Melody Pond/River Song. This is a cracking good arc, ambitious and lofty, but unfortunately, it feels rather thin spread over so many episodes.

This leads me to my first complaint regarding Series 6: the universe seemed so small. Everything was connected to the Doctor and Amy - it felt claustrophobic. When we are introduced to a childhood friend of Amy, she is ultimately revealed to be River Song, thus shrinking the fictional world even more. When we arrived at "Let's Kill Hitler" I was hoping for a fun romp, after the shakeup and (obvious) reveal of Song's identity in the previous episode. However, "Let's Kill Hitler" pushed all the fun to the side in the first ten minutes and opted for more and more foreshadowing and building up of the finale. It seemed we couldn't go one episode without the show teasing us further and further.

Therefore, I was ambivalent going into "The Wedding of River Song". The epilogue of the previous episode left me cold. It was meant to get the viewer excited about the finale, but I didn't think much of it. I was getting sick of River Song. Series 6 had put so much emphasis on River Song that I had begun to long for the days of Russel T Davies who knew how to invest in his characters without providing too much exposure (see Mickey Smith in series 2 and 4 or Wilfred Mott in series 4).

However, "The Wedding of River Song" surprised me. Yes, the solution to the Doctor's death was easily guessed (thanks to the painfully obvious "Previously On..."), but it is not the destination, it is the journey that's most important. The finale provided so much to the viewer, that I could have happily accepted a two-parter instead the rushed and packed single episode. Even if fans disagree on the direction that Moffat is taking, it cannot be denied that Matt Smith as the Eleventh Doctor has come into his own, and is easily the strongest actor in the current series. There is a moment in which the Doctor calls up a retirement home and is told that the Brigadier had passed away a few months earlier. This brings the Doctor to his eventual acceptance of his death, but it is Matt Smith, not the writing, that makes this scene so effective. Of course, this is but one scene of many in which Smith displays such fantastic acting. He was given a fairly complicated and overstuffed script for the finale, but he performed spectacularly.

I suppose that the major issue people are having with this finale is that the ending is a) easily spotted and b) a "cop-out" or a "cheat" or a "deus ex machina". Now, let's systemically examine the claims of point b) and then work backwards to point a).

Firstly, let us define our terms. "Cop-out" means "an instance of avoiding a commitment or responsibility". It is an idiom, which is to say that its meaning will be volatile and dependent on context, often enough. When fans refers to the solution to the finale as a "cop-out" they are probably trying to say that Moffat took an easy way out of the corner he found himself in. This refers to the Teselecta, a plot device he introduced in "Let's Kill Hitler". This "cop-out" also refers to the repeated statement in the premiere that indeed this was the real Doctor being killed. So therefore, Moffat has not only avoided the responsibility of providing a logical answer to the Doctor's apparent real death but has also provided an obvious elucidation.

Obviously, I take issue with this in part. As far as the Doctor's real death, and that we were told frequently that yes this was the real Doctor, it is simply a matter of the Teselecta being able to so convincingly pretend to be the Doctor, up to and including the light show that masquerades as the aborted regeneration. If the Teselecta can fool both Amy and Rory, why can it not fool the audience?

Next, we have "cheat". This is saying that the mystery was not resolved in unequivocalness, that Moffat wasn't playing fair. I disagree, of course. The mystery can be easily solved, which speaks to its plausibility. If the Teselecta had only been introduced in this episode, viewers would have been rightly justified in crying out their rejection. However, like any skilled writer, Moffat puts the pieces of the game into place before making the final move. This is called Chekhov's gun, named after the famed playwright and author. If a gun is shown in the first act, then by the third is should be fired. It's a literary term that implies a logical consistency and efficiency within a narrative. It's also part and parcel of the time travel narrative. Without it, time travel stories would denigrate into incoherency and cheating. With "The Wedding of River Song" the only claim of cheating could be the misdirection related to the real death of the real Doctor. But again, as Moffat and River Song repeatedly tell us, rule number one is that the Doctor lies. Since Moffat offers the solution to the mystery at the beginning and fills in the gaps in the story, one cannot conclude anything other than Moffat played fair.

Thirdly, the claim of "deus ex machina" a woefully misused term and misunderstood to boot. Deus ex machina is a literary term that refers to the abrupt and unforeseen resolution of the plot by an outside party. Its origin is related to classical drama in which gods would abruptly sort out the tangles of the plot at the end of the play. It's considered to be an example of lazy or subpar writing. Whether or not this is true is outside the purview of this particular blog post. Whatever may occur in the end of "The Wedding of River Song" it is most assuredly not a deus ex machina in the literary sense. Not only does Moffat offer the resolution as early as the midway point of the series, it is set up as an idea offered by the Doctor himself. It is the Doctor's cleverness to use the Teselecta that helps him cheat death, not the Teselecta's suggestion. For further explanation of why Moffat played fair, see the previous paragraph.

Therefore, in regards to "The Wedding of River Song" we can conclude this: Moffat played fair, resolved the mystery in a logical manner and did not resort to "lazy" writing techniques such as deus ex machinas. Whether or not it was entertaining is not a matter accomplished with the use of logic.

The episode entertained me. I was not looking forward to it, as I felt that the series had begun to be too close, but within minutes I was excited. This was the reason why I watch Doctor Who.

Of course, the future of the series slightly worries me. Series 6 was easily the most arc-intensive series since The Trial of a Time Lord. In the future, Moffat has teased a return to more stand-alone episodes, but this fills me with dread. Stand-alones or one-offs tend to bore me. I prefer longer forms of dramatic storytelling. This is why I read novels, enjoy trilogies and watch serial television. This is why I cannot get past the first season of Supernatural, no matter how good the show is in later seasons.

However, the intensity of this arc also posed a problem for me. Therefore, I suggest a happy medium. Perhaps instead of a plot-driven arc, the writers could employ a thematic arc. The Cartmel Masterplan, while ultimately failed, could provide an excellent template in form rather than theme for the next series. This arc worked in the background mostly, while coming to a head with "The Curse of Fenric" and then later with "Lungbarrow".

This isn't to say that I didn't ultimately enjoy "The Wedding of River Song". Far from it. It was a captivating and exciting hour of television - the very reason why I watch Doctor Who. My desire to defend it from the fans who disliked it is based on their misuse and misunderstanding of the episode. If fans didn't like it because it didn't entertain them, this is acceptable, rather than fans dismissing it because they are under the delusion Moffat deployed a deus ex machina (rather than a Chekhov's gun) to tie up his loose ends. If they weren't entertained by the finale because they solved the mystery, then this just goes to show the plausibility of the resolution and a testament to Moffat's ability to play fair.

Whatever the answer, I liked "The Wedding of River Song" and it has made me excited for another series of Doctor Who. But not the Christmas story - the last one was very much a failure. But that's another blog post entirely.
Posted by matthew.