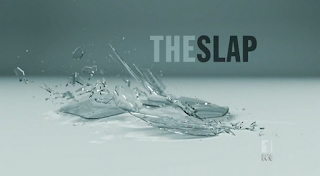 This is the first of two posts reviewing the Australian TV serial The Slap, based on the award-winning novel by Christos Tsiolkas. This particular post covers the first four episodes of a total eight. First, a bit of background: the novel is terribly written, riddled with cliched prose and poor limp description. I made it about 50 pages before I had to give up. I had no conception of the novel's potential for awards. But the premise is just so compelling that perhaps an adaptation could possibly alleviate some of the weaknesses. I decided to watch this if only because I hoped the execution of the TV serial could match the promise of the central idea of the novel.

At Hector's 40th birthday barbecue, we're introduced to Aisha, Hector's wife, Connie the babysitter they employ, Harry, Hector's cousin, Rosie, Aisha's best friend, Gary, her husband, Anouk, Aisha and Rosie's childhood friend, and all of the children of the various couples. Hugo, Rose and Gary's son, is somewhat hyperactive, and when a cricket game takes a turn for the violent, Harry steps in and slaps Hugo. The series follows the repercussions of this slap, the reverberations throughout the families and the lives changed by such an act.

The novel lends itself to the structure of a serialized story, which is to say that each episode takes one character as its focus and follows the plot linearly. The next episode picks up with another character, but continues the overarching plot. There are no flashbacks or flashforwards. While this might make for conventional storytelling, there's a certain power in the constant onslaught of the plot, that never lets up, that never blinks in the face of awkwardness or uncomfortable turns of the plot.

Ostensibly the series struggles with the moral ramifications of the slap. Did Hugo deserved to be punished? Did Harry act out of line? Is Rosie overreacting when she attempts to take Harry to court? Are there any good people in this story? Does anybody behave in a morally good sense? Of course, at the halfway point, the series doesn't take a stand. Instead, it presents to us vivisections of four characters, analyzing them and making them squirm under the microscope, if you'll allow me to mix my metaphors.

The show works because of the aforementioned exposure of the characters, their desires, their relationships, their histories together. In the first episode, a lot of the relationships are quickly mapped out: Rosie is somewhat hippie-ish and unwilling to see her child as anything but angelic, Connie and Hector dance around each other in a flirting manner, until eventually they kiss, and even Hector's tentative relationship with his wife's best friends is quickly sketched out. A lot of the show's success lies in using these complex links later in subsequent episodes. There's a scene in the fourth episode, the one focused on Connie, in which Hector comes to pick up Aisha at Rosie's house, where Connie is babysitting Hugo. Aisha goes to the door, opens it and sees Hector awkwardly standing at the threshold between exterior (his car, the open air, freedom) and interior (Rosie's claustrophobic and cluttered house, filled with trinkets). The camera looks past Aisha's face, past Rosie's face (both of which are complex reactions to Hector's presence) to Connie's face. She's enamored of Hector, but Aisha literally and figuratively stands in her way, along with Rosie, who symbolizes the traumatic events of the slap. In addition to all this complexity, you have Rosie staring at Hector, wanting him to take sides in the inevitable court case. There's more happening between Aisha and Hector beyond the slap, and more happening between Aisha and Rosie beyond the slap as well. All of this happens in a second, but the show implies all of this so quickly and so efficiently.

While the fourth episode works as a sort of "end of volume one" climax, there are still amazing moments to be savoured from the second and third episodes, Anouk's and Harry's respectively. Anouk is a staff writer on a famous Aussie soap, and she's dating one of the stars, a much younger and energetic actor. Anouk has a complex relationship with Aisha and Rosie, in that Anouk never grew up, as symbolized by her dating Rhys. Anouk is also working on a novel that fictionalizes the shared childhood between the three friends. As a non-parent, she tends to see the slap as being justified, but her loyalty to Rosie prevents her from taking a side, even when Harry invites her to lunch so that he can ask her which side she will take. Anouk's story is a fascinating portrayal of a middle-aged woman who doesn't conform to preconceived notions of womanhood: motherhood, maternal instincts, the caregiver. Anouk's mother is suffering from cancer and has been for a long time, but Rosie is the one who takes care of her, putting a strain on the relationship between Rosie and Anouk. Of course, a lot of this is explicit in the series, but a good portion of it is implicit, especially the symbolism.

Harry's story is one of success. There's a scene early in his episode in which he visits the grave of his parents. Manoulis, Hector's father and Harry's uncle, tells him that his father was angry, died angry, and never achieved happiness. "Don't be like him, Harry" Manoulis tells him. Later in the episode, Harry attempts to apologize to Rosie and Gary for the slap, but their reaction is quite bitter. He storms out of the house, gets into his car and visits his mistress, where he immediately engages in overly rough sex. He imagines himself shooting Rosie, Gary and even Hugo. He yells at his wife and comes close to abusing her. But he prides himself on being an amazing businessman, an amazing husband, and an amazing father. The slap changes his relationship with his son, but not in the way one expects. Instead, the slap, and Manoulis, and his violent reaction to the rejected apology only serve to make Harry see himself in a truthful light. It't a tremendous moment of catharsis when even after his despicable behaviour, his adolescent son holds his hand and expresses unconditional love.

This is a lot of detail about a show in order to review it, but it's necessary to show how absolutely convoluted and intense these connections are between the families. This is why I wanted to read the novel, but the terrible prose pushed me away. When you strip away the author and his bumbling tools, you're left with a fantastic premise that serves a serial story perfectly. At the halfway point, The Slap is one of the best television shows I've ever seen, all thanks to a luminescent cast and subtle writing, despite its showy premise. Each of the four episodes work to serve the greater story and at the same time, serve to tell a contained story about one person trying to live in such a complicated world. The Slap is utterly engrossing and complex.
Posted by matthew.