Dark Gods - Part One of Two 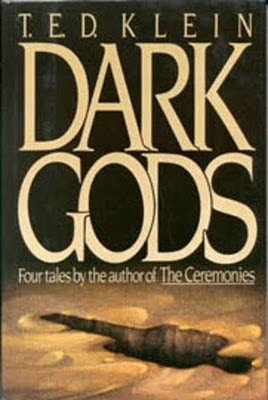 "Children of the Kingdom"

I suppose that it is rather fitting, considering the author's academic background in Lovecraft, that the overall tone of this longer story is of racial paranoia. Set in New York City in 1977, the first person narrator, presumably T. E. D. Klein himself as he is referred to as Mr Klein, details helping his infirm but jovial grandfather into a resting home in Brooklyn, in a neighbourhood that's not quite gentrified and not quite a jungle. "Children of the Kingdom" while superficially a horror story, is more of a social document of a singular place in a singular time. The elderly white occupants of the resting home express fear and distrust of the blacks that seem to have them surrounded. The narrator offers many bits and pieces from newspapers and from senior citizens of the racial violence and creeping atmosphere.

It's inevitable that this simmering violence comes to a boil when the power goes out, during the famous blackout of 1977. People engage in looting, rioting, and fighting all the while the narrator and his wife are separated, which ends in a way not expected.

As a long story, Klein takes the time to develop the cast, the narrator, his grandfather, and his new friend, a Costa Rican priest who harbours some bizarre theories on the origin of man. In scenes delicately written without the onslaught of exposition, the priest explains to the narrator that he believes that man came from Costa Rica and that they eventually migrated due to the violence of another group of people. "Another tribe?" the narrator asks. The priest explains that they are God's mistake, the original children who didn't quite look like God. They attacked the prehistoric men, but were cursed by God, unable to procreate amongst themselves, so the cursed men rape the prehistoric women.

One can already feel Lovecraft's influence on this story: an ancient alternate history, the fear of miscegenation, and the slow building of details. However, Klein is not writing an homage or a pastiche. Using a mixture of character development and a subtle integration of background material, the reader is able to put together the horror at the heart of the story.

It doesn't climax with gore or with an epic showdown. No, it climaxes in a heartbreaking and rather transgressive manner, frustrating no doubt many readers who prefer their endings nice and neat. It's a slow burn of a story, but it works thanks to Klein's synthesis of Lovecraftian horror and a very careful social eye. There's an obvious parallel being made between differing neighbourhoods of New York, being made between white people and black people, and even being made between the old and the young. The structure of the story allows such interpretation. However, the racial politics in this story are quite distasteful for a modern reader. The implication that the blacks of the city are primitive and prehistoric and uncivilized is souring, but not fatally so. Other than this questionable view of race (which might simply be a knowing and ironic reference to Lovecraft), "Children of the Kingdom" is a successful and unnerving horror story, worthy of the master himself.

Some of the most effective stories in horror fiction use implication rather than description. The details in the margins accumulate, allowing the reader to put together an image of horror that scares better in their imagination than if the author had simply announced it and dumped it on the page. "Petey" works only because of the margins.

Using the narrative device of a cocktail party celebrating the homeowners' recent purchase of a stately rural mansion, Klein colours the edges of the house and of the story with odd little scraps that eventually build up in suspense and in terror.

This isn't entirely successful however. Klein has thirty named characters in a story of just over 50 pages. The benefit of this is that there is no shortage of people talking, non-stop talking, but the downside is that at least two thirds of these named character are entirely superfluous. "Petey" is reminiscent of William Gaddis' approach to dialogue; Klein piles on the speech and conversation, using little descriptive language until characters are isolated.

The other part that just doesn't quite work is the story's interest in the Tarot, specifically in the second half of the story. As a device, it works to stall and provide suspense. Details emerge, and the horror begins to take shape, but Klein slows the reveal by having the party people play with Tarot cards, all with heavy symbolic undertones, of course. While the suspense works, the use of the Tarot cards are clumsy and kind of childish. They've become a bit of a cliche, and it doesn't help that the omniscient narrator of the story mentions that Tarot decks are the product of charlatans, no doubt attempting a parallel with Klein himself.

These two missteps do not ruin the story, especially the extremely effective ending. One is reminded of Stephen King's ending to Pet Semetary, in which the most horrific and shocking moment comes in the last paragraph of the novel, leaving the reader desperate to know what happens next, but terrified at the implications of what may have occurred. The same happens here. Using 50 odd pages to build up the threat, Klein simply lets it happen in the final paragraph, leaving so many questions and so many implications that the reader is forced to imagine their own ending, which as aforementioned, is far scarier than anything the author could dump onto the page.

If the success of horror is through the accumulation of marginal details, then surely "Petey" is utterly accomplished. Instead of throwing the kitchen sink at you (Clive Barker), Klein invests in one situation, one horror and lets it creep up on you, rather than forcing it down your throat.