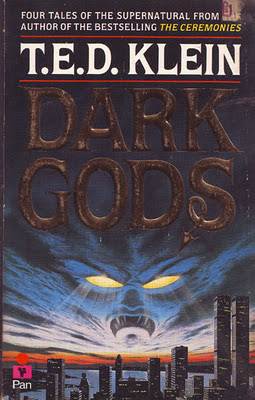 There comes a time when a pastiche or a parody meets plagiarism, when the new item borrows so heavily from the old that it cannot be said to be original. This story is so obviously Lovecraftian, that it uses quotes from the famed author's journals, and is somewhat directed to Howard himself.

The narrator, an aging author of fantastic tales in the spirit of Lovecraft (which is commented upon, naturally), finds himself drawn into a languorous Lovecraftian story of ancient tribes of foreign people who got up to nasty business and had some sort of privileged position in conversation with matters beyond human reckoning. He meets a former missionary on a plane, who tells him of a long lost tribe, stumbled upon, who made his team disappear, all with ominous tones. The missionary claims to be on the run from the tribe, who wish to silence him lest he announce their existence to the world. Of course, the named tribe is fictitious, and is even cherry-picked from a Lovecraft tale.

Just like in previous stories in this collection, as well as in the Lovecraft tradition, things do not end like one expects. There is no confrontation with the beast. There is no showdown or climax to speak of. Rather, the horror comes from the narrator finally understanding the vast and unfathomable horror at the heart of the story, the horror that the reader is already prepared for.

"Black Man With Horn" fails because of the metafiction. The reader is familiar with Lovecraft; therefore the end cannot be a surprise. All of the "beats" that the story hits are ones previously used by Lovecraft himself. This is where the aforementioned criticism of plagiarism comes into play. There is nothing new in "Black Man With Horn" except for one clever part where the narrator sees a John Coltrane album cover featuring the man and his horn, and the narrator immediately makes the very racist comparison between the eponymous man and the jazz legend.

If the racial politics of the other two stories were superficial and excusable, this story left me uncomfortable. A leering grinning black youth mischievously shadows a nice white family of tourists. A silent black man works as a porter. A couple of "half-naked" youths loiter on the steps near the narrator's apartment. The narrator is told explicitly that due to the increase in black people, his neighbourhood is inherently unsafe. This story makes it increasingly hard to forgive the racism as a knowing and ironic reference to Lovecraft, a notorious bigot.

Other than the structural faults and xenophobic tones, the story is boring. Nothing substantial happens until the very end, at which time the narrator explicitly reminds us that in real life, there are no neat endings or even endings at all. Then the last few paragraphs hit the reader with the horror, hoping to shock them. It only sort of works. I suppose that any success the story might have with me is because of my enthusiasm for Lovecraftian horror and for the goodwill generated by the two previous stories. This is easily the weakest of the three that I've read so far.

On a whim, Nadelman and his future wife go to the open house party at an S&M club in New York. This is what they encounter when they arrive.

...nearly all the customers were men. Most of them appeared to be out-of-town businessmen in search of pickups or simply someone to talk to, or perhaps just a good story to bring back to St. Paul. In the dim light they looked lost and faintly embarrassed. There were only a half a dozen women in the room, including a homely girl with a flat, pock-marked face who strolled among the drinkers in nothing but black panties, a somewhat dazed smile, and a pair of heavy chains fastened in an X across her sad, sagging little breasts.

This is absolutely gorgeous description, conveying the sadness and the feeling of things being forced.

This story is more of a character piece than simply a horror story. It's also the longest story in the collection, taking its sweet time in explaining the personal history of the main character. With the tone of authors such as Richard Ford, Klein sketches out the meek small life of Nadelman: his advertising job, his too-nice wife, his blank slate of a son, his cliched affair on the other side of the city. He used to have ambition; he published a long poem in his college's newspaper, detailing the existence of a god, rival to Yahweh. This new god is one of mischief and injustice, taking pleasure in torturing humanity.

If the other stories in this collection present a worldview of fatalism, then this story attempts to explicate how this ideology could be born within a normal man. As a child then teen, Nadelman was confronted with the injustice and lack of logic in the world. Why did bad things happen to good people? Using twisted logic, Nadelman justifies the meaningless deaths in the world as the victims deserving their fate for whatever slight he can imagine. Reaching his late teens, early twenties, he re-positions the blame on the inherent lack of God in the world, rather than the insanity of God. The poem he eventually writes, made up of scribblings from his childhood and fragments of dreams, coalesces and refines the idea of a rival god, one who is playing a cosmic joke.

The thrust of the story is that some rock band finds the poem, uses it as lyrics to a turgid adolescent attempt at occultism, and some looney in Long Island thinks it's a recipe for conjuring up a god. The story details all sorts of creepy coincidences and spooky happenings, all with cold detached lyricism. Eventually, the story ends just as the others do: with the implication rather than the reveal.

"Nadelman's God" might be the most obfuscating and obtuse of all four stories. The "god" is kept at arm's length - no, kept in another borough of a gigantic city, and is never ever detailed in any satisfactory way. It's not even clear whether the god is a product of Nadelman or that Nadelman simply had some sort of epiphany at a young age, a moment where he discerned the truth. Both of these options are handled equally. Nadelman is positioned as a skeptic, thinking that people who claim to know the real truth often know less than the supposedly ignorant people, which is ironic if Nadelman did indeed have insight in the vast workings of the cosmos. However, there is a parallel made between Yahweh creating this rival god and Nadelman as an author. The concept of Nadelman as a creator, and "author" as "god" is implied as well. Each possibility for the rival god is touched on with equal weight, making an ultimate theory seemingly impossible. This is, of course, to the story's credit.

While I liked this story, and can probably appreciate its Lovecraftian elements as the superior pastiche out of all of them, I felt it to be a rather cold and sparse story. When so much narrative time is spent on developing the (in)humanity of the main character, then the horror elements are left somewhat unformed or malnourished, to borrow a metaphor from the book. I still rather enjoyed the story, but it's certainly not the most engaging. It's too cerebral and theological to be effective or scary. It does exemplify the author's style perfectly, encapsulating all of the themes and tricks, as if the previous three stories were warm-ups for this grand finale.

All this book has done has stoked the fires of anticipation for Klein's sole novel, The Ceremonies. Although, overall I still really liked this collection. After all, I ended up writing over 2,000 words on a 260 page short story collection.

>"the story is boring. Nothing substantial happens until the very end"

Why the hell are you reading this, if you don't want Lovecraft's style?

And accusing Klein of plagiarism (twice) is just ridiculous. Can you cite _any_ instances of his actually using more than a few words here and there as a tribute?

This is typical of the foul reviews being posted of Lovecraftian works by people who seem to have an axe to grind because they don't get a modern horror novel with a rape-murder-per-page plot.

Just fuck off, you idiot.

Firstly, the accusation of plagiarism is merely reiterated, rather than a second separate accusation. And, as I mentioned in the review, sometimes pastiche can border on plagiarism. Tarantino's Kill Bill is an example of this creeping border.

Secondly, I would hardly claim my review is "foul" nor does it have an "axe to grind". Frankly, I enjoyed the collection as a whole. I even mentioned that I liked the book enough to type over 2,000 words about it. Just because I liked it does not mean that I cannot find fault with it.

Why am I reading this? Well, when I began the work, I had no idea that T. E. D. Klein was in the Lovecraft vein, nor did I know that Klein's academic studies were in Lovecraft. I was expecting a high quality horror collection from 80's. I received as much, but in a different flavour (ie Lovecraftian).

I think my review is both fair and on the whole complimentary. Why call me an idiot? That hardly seems conducive to discussion, considering that you will no doubt not return with a rebuttal.

Wow that was an astonishing response to your well-considered critique. I just finished this collection--having heard great things (and having, sadly, already read the best story in the collection, before beginning it)--and found it to be quite good but not the "classic" it is made out to be by some. Klein is obviously a skilled writer and the collection is, at times, meticulously detailed with well-rendered and fascinating characters and settings but the stories--long as they are--feel like a mere fraction of what they could have been and feel as though they could have easily gone on to be filled out into compelling longer works. Laird Barron is a direct descendant of Klein--that much I am sure of. Barron is writing fiction in such a similar mode to Klein here in Dark Gods but, to my mind, with much more satisfying results.