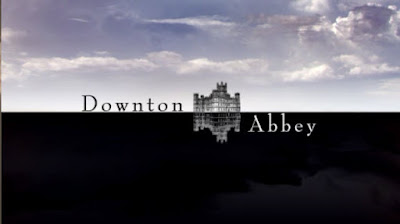 There's going to be a special place in my heart for Downton Abbey for a long time. On the day that my long time girlfriend broke up with me, I had to work a night shift. Usually, on these particular evenings, I chose to read, play computer chess, and waste time on the Internet. This night, I was in the middle of Alias Grace, but I just couldn't read. I couldn't concentrate. So I started watching Downton Abbey. I watched the entire first series that night. The theme music now makes me think of that night, and how a simple costume drama, a soap opera, could distract me enough for a night, instead of facing a reality of being dumped (only hours before having to go to work - that doesn't seem fair, does it?).

Now a year later, the second series has aired, and in typical fashion, I waited until the series had completely aired, and then watched eight hours of indulgent period drama over the course of two nights, staying up until four a.m. the first night. There's something complimentary to said about Downton Abbey's addictive properties, the viewer's utter compulsion to return to the country estate and home to some of the most distasteful plot contrivances ever put to screen.

While I neurotically watched the entire thing, drooling over Lady Mary's exquisite beauty and Carson's booming voice, after the show had ended in its predictably cliffhanger way, I kept returning to how irritated I was with the path the plot took.

Really, there are only two interesting things that happened in Downton Abbey: Sybil decides to bash off to Dublin with the chauffeur, and the First World War gingerly touches the house. The Great War only takes away one character for good, and when it threatens to put Cousin Matthew in a wheelchair for the rest of his life, the show mercifully and conveniently returns the use of his legs. After all, he's meant to continue a "will they or won't they" relationship with Mary apparently until the end of the stupid show. Any time the plot moved for these two characters, it was simply a bait and switch - they get closer to admitting their feelings - no wait, let's take his legs.

It's this stick and carrot approach that grows increasingly irritating with the other plots running through the show. Specifically Bates and Anna. Did anyone care about their plot line? If the artifice of the show was apparent with Matthew and Mary, Bates and Anna are the ship's foghorn in the viewer's face. Anna tells Bates that she'll stick by him through anything - immediately cue the twist that Bates' wife is going to come between them.

The lesson in Downton Abbey is to keep your mouth shut and to simply do your work. Anytime you deviate from the norm, such as speak aloud your feelings, the plot rewards you with hardship and heartbreak. No character remains unscathed in the show if only because none of them mind their own goddamn business. Constantly, a character will be pining away or looking sad, and another character will demand they inform them of the matter. "What's the matter" is the most repeated phrase of the entire series, followed closely by the house's name, which is repeated incessantly, perhaps reminding the American viewers of the show that doesn't seem to star anybody famous.

If the primary moral is to maintain silence, then the second one is to remember your place. Downton Abbey's politics seems to codify and rationalize a dead way of life. Only in times of great recession would a television network have the audacity to air an opulent series about a grand traditional aristocratic family doted upon by an army of servants who are constantly being reminded of their station. Even Carson, my beloved booming voice, tells the audience that he hoped the die in Downton Abbey. Truly, his greatest ambition is to serve all his days. Downton Abbey is at pains to remind the staff that their proper place is under service of great benevolent and altruistic people such as the Crawleys. No matter how poorly they behave, Lord Grantham sagely pats them on the head and forgives them. No matter what Bates might have done, Grantham treats him as an equal. There could be no more benevolent families out there, and the show is at pains to convey the dying way of life. The characters mention incessantly that the war is changing everything, and Downton Abbey must remain relevant in this new world, thereby giving justification for the continuing nonessential existence of the aristocratic family. Lady Grantham attempts to justify her decadent lifestyle by arguing that her house produces employment, the hoary canard of the bourgeoisie, if I've ever heard it.

The politics are distasteful, but so is the breakneck pace. It's understandable that the series wants to move through time quickly, but there's something to be said for letting the scenes breathe. For every plot twist, the scene changes rapidly, robbing the viewer of the emotional consequences of the scene itself. When Bates' wife turns out to be dead, there's not a single moment where Bates reflects on the death of his wife, save for Lord Grantham making a cold and callous observation - no doubt intended to mirror Bates' own thoughts. But if Downton Abbey has the aristocratic rich people tell the audience of the servants' emotions, then they are robbing those servants of their voice, thereby asserting superiority over them in all fashion. Like I say, distasteful.

I plan to give the Christmas Special a try, but if the quality dips further than the second series, that will be the last time I watch it, save for reruns of the excellent first series. It's a shame the show became a parody of itself so quickly, but that's how TV shows go from now on, it seems.
Posted by matthew.

Thanks for commenting on my blog.