Lest liberty perish from the face of the earth - buy bonds

is the name of this watercolour by Joseph Pennell housed at the Library of Congress. Here is a large jpeg of this stunning drawing. In the words of Professor Mark Sample, "the painting’s stark portrayal of a besieged America was intended to spur demand for WWI war bonds — even though American soil was never threatened during the war." The image is of a beheaded Statue of Liberty, an American icon, used in an allegorical sense here. I'm posting this because of its stunning, breathtaking simplicity, its starkness and vividness, not because of political reasons, although feel free to interpret as you wish. For more information on this piece, click here for the Library of Congress' page. 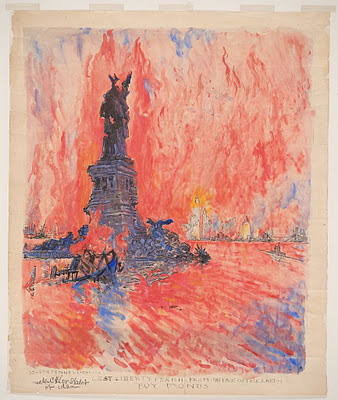