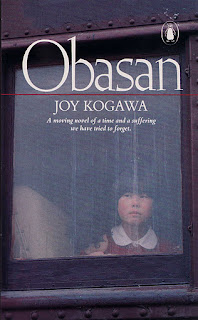 Naomi is a sheltered and quiet five year old Japanese Canadian, whose life is irrevocably changed when Canada institutes the War Measures Act in response to the Pearl Harbor attack. Now seen as enemy aliens, her family, among hundreds of other families, is taken to internment camps where they are separated from the rest of Canada in a misguided and frankly racist act. She is protected by the silence of her aunt, her Obasan, even years later, when Naomi revisits the trauma.

On the back of my Penguin edition paperback, Kerri Sakamoto claims that Obasan is "an internationally acclaimed, widely studied novel firmly entrenched in the Canadian literary canon." Notice that this cover blurb, and it is a blurb while unconventional, makes no mention of the novel's literary merits beyond its "entrenchment" in the canon. While this quote is out of context, and in her introduction Sakamoto remarks on the literary qualities, this shows that Obasan is heralded because it is studied. This is a novel that is more prized for being important than for being a good novel.

It is certainly a very important work of social awareness. The internment of Japanese-Canadians was not taught in my high school history classes, and I took quite a few, across a broad spectrum. In my history class that explicitly focused on the World War Two era, there was absolutely no mention of the forced segregation of Japanese-Canadians. I might remind my readers that I live in and went to school in Canada, the nation that cannot let go of its past, as manifested in its literature.

Why then is this ugly aspect of our shared history rarely mentioned? Perhaps it is shame. Perhaps it is something white Canadians would like to sweep under the carpet. This shame is preventing students from learning about this extremely important facet of our national history. To borrow from my professor, awareness of this history shatters our national mythology. To be told the truth is discomforting. Perhaps that is another reason why Obasan was not taught in my high school, in that it raises some serious questions about the cultural identity that we share and experience, questions that are inherently accusative and interrogative of the government. Because of this, Obasan should be taught in high school.

Of course, the danger in teaching a novel is that the reader will resent the text, as it is forced unwillingly on the reader. Everybody has examples from school, examples of texts they despised, if only by dint of mandatory reading. Many people have admitted to hating, say, The Grapes of Wrath, and then later re-reading it for pleasure and discovering a love for the novel. Perhaps, it is more important for readers to appreciate the historical background of Obasan than it is to enjoy it on an aesthetic level.

In four paragraphs, I have yet to mention whether or not I liked reading Obasan. By using history and social significance, I am purposefully delaying, or even, deflecting the reveal of my own opinion. Sometimes, the opinion of the individual is irrelevant. In the case of Obasan, it couldn't matter less. Obasan is an important work of art because it points the reader to a time and place of great shame. Obasan is the hand that pushes the dog's face into the mess it left behind. Obasan's strengths as an aesthetic experience are far less important than its didactic motives.

Literary importance can sometimes be synonymous with "critic-proof". Nobody in their right mind proclaims Hamlet or The Great Gatsby as a failure. Any lack of success in reading "great" or "important" texts is a failure of the reader, and not of the text. There are some texts that be universally accepted as "great" or "the best".

This is utterly false. No text is "critic-proof". Nothing can be universally accepted as "great" or "the best". Any time a text is proclaimed to be one of the best ever, there is often a measure of cultural relativism. This text might be superior in this culture but its portrayal of an experience might be so culturally specific as to be alien to another reader from a different culture. As The Great Gatsby, we move further away from its position as a great text about the Twenties. There will come a moment when the lives of Jay and Daisy seem as alien as the cast of Twelfth Night. (Of course, the counterargument to this is that certain stories or archetypes are indeed universal, and that certain experiences, techniques and modes of communication (non-verbal, musical, etc) can be appreciated by all people.)

My rejection of texts being "critic-proof" leads me to the conclusion that despite Obasan's position as important text, I must, in all good conscious, not abstain from articulating that which I did and did not like about the novel.

Firstly, there is Kogawa's background as a poet. Generally speaking, when poets turn to composing novels, there is an expectation that the prose will be "sumptuous" or "beautiful". Critics expect the poet to produce a higher quality of prose, on a sentence-by-sentence level, than the "regular" novelists. Of course, this translates to a pretension of artful language. Here is an example of Kogawa's use of the poetic language in Obasan:


Silent Mother, you do not speak or write. You do not reach through the night to enter morning, but remain in the voicelessness. From the extremity of much dying, the only sound that reaches me now is the sigh of your remembered breath, a wordless word.

My response to this is, of course, a strenuous rolling of the eyes. What in the world is a sigh of remembered breath? How is a sigh a word? There is another instance earlier in the novel where Kogawa mentions the mountain shrouded in the "weatherless mist". Obviously this is a bizarre contradiction for the sake of a nice turn of phrase. It is irritating and distracting.

Obasan is a novel of two halves that do not coalesce (despite the themes of cohesion within the greater community of Canada). There is the lavish poetic sections of dreams and overly stylized phrasing, and then the stark expository or descriptive prose. The regular prose does the heavy lifting in regards to historical context or whatnot. It is especially jarring when these two modes are close together in a chapter. Many flowery sentences would have been quickly struck through with red marker if this manuscript had been presented anonymously to a modern creative writing course. Perhaps it is unfair to judge Obasan, a thirty year old novel, by the standards of 2011. Or perhaps, as a reader, I am simply impatient with ambitions for poetry. I love a beautiful turn of phrase as much as the next critic, but I prefer, no I demand internal consistency. If there is going to be two modes of communication, they should mesh. If there is going to be poetic language, it should be internally consistent and not partake of contradictions for the sake of a nice phrase.

Despite Kogawa's pretensions to lofty prose, I am utterly enamored of the semiotics of the novel. The themes of the novel, silence and stillness, are represented in a multitude of cooperative elements and symbols. Both water and stones are repeated but all in a context of "repetition with a difference". The very first page and the last page mirror each other in structure and in symbol, but again, with a difference. At the beginning of the novel, Naomi sees a new moon. At the end, she sees a full moon. This represents her newly acquired knowledge of what actually happened to her mother when she disappeared from the internment camp. The moon has been repeated previously in the middle sections, but compared to a white stone; the novel's epigraph makes use of a Biblical passage referring to a stone. The complex tapestry of symbolism is there for the reader to provisionally disentangle, rather than empirically decipher (to borrow heavily from Barthes and Derrida). This can be regarded as Obasan's greatest aesthetic strength.

Obasan is a good novel, in spite of the burden of history being foisted upon it. Obasan, it seems, has been laden with the responsibility of being a didactic text, instead of a text that be artistically appreciated, especially if it is being taught to a group of narcissistic teenagers who no doubt would loathe to admit to enjoying such a text. Of course, this sympathy I express for Obasan is moderated by the fact that Kogawa volunteered to take on this responsibility. This is irrelevant to the dual nature of Obasan: a historiographic metafiction and a work of art to be enjoyed and appreciated.

I might take a moment to say here that "enjoy" is used in the sense of "appreciation" and "evaluation" rather than "pleasure" or "fun". Do not be mistaken, Obasan is a dour novel, full of ugly events that cannot but depress the reader. While this might impact a read "for pleasure" (how can one ever hope to have fun with Obasan?), it cannot be considered a criticism against its importance or its success as a work of art. Obasan is something you should read, rather than something you might want to read.
Posted by matthew.