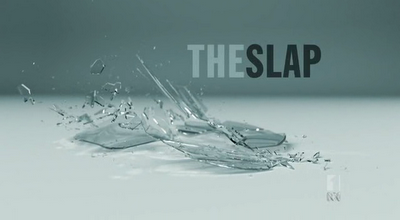 In the previous post, I talked about how excellent the show is, due mostly to the acting and the complicated layers of characters being displayed. I also mentioned how strong the structure of the series is, using each of the novel's eight narrators as a focal character for one episode apiece. In the first four episodes, the series examined Hector, Anouk, Harry and Connie. In the second half, the focal characters are Rosie, Manoulis, Aisha and finally Richie.

While the first half set up the titular slap, and most of the character work, the second half appears to be about the fallout, the repercussions. The fifth episode, Rosie's chance in the spotlight, has the cast reunite for the first time, but in the context of the court case. It's not difficult to imagine the structure of the series being mirrored, made up of two halves, as per my review, although the decision to do so was arbitrary and unrelated. Episodes five through eight, while observing different characters, espouse a darker view of its cast than previously, and this is especially true in the fifth episode.

Opening on Rosie in the bath, Hugo's cries have caused her breasts to lactate, clearly a symbol of her strong maternal instinct. Rosie's breast-feeding of Hugo has been an implicit taboo subject among the cast; none of them want to tell Rosie that it's not healthy, but they cannot. Finally, it takes an outsider, a manipulative barrister, to point out that Rosie is still breast-feeding Hugo, who is four years old, old enough for solid foods. It's this scene in particular, coming at the halfway point of the episode, in fact, that perfectly captures the tone and nuance used by the entire series. With Rosie on the witness stand, Harry's attorney takes the strategy of discrediting the complainant by exposing her husband's alcoholism, Rosie's imbibing despite breast-feeding, and in general, her own incompetency as a mother.

Previously, the series has positioned Rosie as not quite all there, overly emotional and above all else, in the wrong in regards to Hugo's slap. She should have been disciplining her child or Harry was simply defending his own child from Hugo's cricket bat swing. The fifth episode challenges that position by forcing the viewer to sympathize with her. It does so by having the barrister attack her, badger her, and force her to admit that at a barbecue, there was a tacit agreement among the adults to simply supervise the children without getting hung up on specifics, which led to a lack of discipline on the part of particular parents.

The other way that the series generates sympathy in the viewer is using the Muslim family as counterpoint. Unlike Gary, Bilal is a strong family man, a strong father, who doesn't drink, who is intense and in shape, essentially, Gary's opposite. After the court debacle, Gary goes to the pub, and Rosie, drunk and high, shows up at Bilal's house, demanding help in retrieving her husband. He quietly and intensely drives her to the pub, enters and quietly tells Gary that it's time for him to go home. Gary refuses and yells at Rosie, so the would-be saviors of Gary return to the car and sit for a few moments. All of this is done without music, without dramatic flair. It's simply the actors doing their best.

When Bilal brings Rosie and Hugo home, there's this moment where Rosie looks up at the tall handsome Muslim man, and he stops her before anything can happen. He tells her to go the kitchen where he proceeds to tell her that she has bad blood, that she and her family should have nothing to do with his family. She reminds him of a life that he has put behind him, thanks to God and family, and he never wants to see her again. It's a devastating scene if only because what Rosie needs most right now is a strong role model, a person to whom she can look up. It's what she needs, and it's cruelly denied her on the dint of bad behavior. It's particularly hard to watch if only because these characters don't know how to fix what's wrong.

Episodes 6 and 7 are increasingly uncomfortable for the viewer. Each time the particular fcal character transgresses the commonly held social boundaries, the viewer squirms, completely at unease. At the gathering after a funeral, Manolis gets into a pushing match with a former friend, falls and ends up screaming at Koula, wishing she would die but she never will. In the middle of a coffee shop, Aishe reveals to Rosie something that could have helped the case, and Rosie screams at her, belittling her, and reminding her of the middle class perfection she has, despite the fact that Aishe's marriage is falling apart. Each of these scenes are painful, not only for the characters but the viewer. The problem is that there is no catharsis. There is no relief. And it's all internal. These characters, if they could just speak to each other, if they make the other understand what they are going through, then these situations could be avoided, but everybody represses, everybody internalizes and there's no outlet save for transgressive behaviour.

Aishe's episode is devastating. Hector reveals to her that he fooled around with a girl, but refuses to name her while at the same time, Aishe flirts with the idea of flirting with a handsome and worldly vet interested in global solutions. His exotic manner and talk of far away places contrasts with Hector's white, Greek and decidedly middle class position. This new vet, Art, even manages to remind Aishe that she is the only person of colour in the extended family. Later, when Hector reveals the affair, Aishe wants to know if the girl is white. The racial tension that has existed, the immigrant's perspective, then Aishe's episode brings that to light, exposing that even in a community of "others", Aishe herself is an "other".

Near the end of the episode, the true victims of the slap come to light, but in a peripheral way, which appears to be the series' true interest. During a quiet dinner, Aishe and Hector discuss going to Harry's for his son's birthday party, but Aishe doesn't want to talk about it. Her son tells her to chill and she leaves in a huff, with her son wondering what the hell caused this. In the sly manner that the series traffics in, the victim has slipped past the viewer. The literal victim of the slap, Rosie's son Hugo, is not just a victim of Harry's slap, but of Rosie's selfish negligent parenting. Aishe and Hector's son is a victim of his parents' narcissistic parenting. The children aren't innocent; they're products of a family that's too screwed up and too concerned with the pleasures of the self. It seems that the only character who is morally good is Anouk. She's the only one that doesn't choose to procreate, therefore she cannot taint a child with her poisonous life.

The Slap's interest seems to be in the marginalia of this world. While ostensibly starting the show with the lead character, Hector, each episode follows a path down a line of importance. Aishe is peripheral to the slap, Manolis is peripheral to the slap, and Richie, the eighth episode's focal character, is less important than anybody. If The Slap's main concept derives from the marginal people in Australia, then its true target is the people on the margin of the margin. Going further down this road takes us to the symbols on the edges, such as Anouk's novel about the wild past of the three girls, or Connie's necklace, or the car that Harry gives to Hector that breaks down at the most inopportune moment (figuratively and literally). These are more important symbols than the slap itself.

It climaxes in an believably tense scene in which Richie finally spills the beans to the worst people to spill the beans to: Gary and Rosie. They march him down to the vet's office, where in front of his mother, Richie is forced to reveal the truth to Aishe. At that moment, Connie comes in the scene, and exposes the allegation as a lie, causing the focus of attention to shift on Richie, with claims of "freak" and "pervert" being thrown about. Richie runs home after being told by his mother that she is ashamed of him. He takes a bottle of pills. His mother comes home and saves his life, all conveyed in the most heartwrenching and effective style. If I thought that episode 5 and 7 were hard to watch, those were nothing.

Luckily, The Slap doesn't hate the viewer, and rewards them for making it through the series. We see Aishe rightfully leave Hector (only to return, but in an ambiguous way), Gary and Rosie leaving for a fresh start, Harry and his wife watching the ultrasound of their new addition, Richie apologizing to Hector, and more importantly, Richie and Connie reconciling. She takes him to a music festival, where Richie ends up enjoying his first kiss with a cute boy that's interested in him. It's a textbook example of catharsis.

It ends in a beautiful way, climaxing with the character least connected to the slap itself, but the main story has ended, multiple times. Rosie and Aishe have separated in a previous episode, Anouk has come to terms with her life, Harry might have realized the error of his ways, Manoulis comes to understand his wife and his life, etc etc etc. Structurally speaking, each episode ends in a climax and a resolution, but there is a larger story to be told. This is a drama about the suburb, about the immigrant experience in Australia, about heteronormative relationships, about secrets and lie, about social situations gone horribly wrong, and mostly, it's about the way we treat our family, the damage we cause, and the fact that all unhappy families are unhappy in their own way.

The Slap is a masterpiece. This is not going to be the last time I write about this. Each episode grabbed me and I held on. It's an exhausting show, but it feels emotionally real. I never felt manipulated or condescended to. Even the overly emotional sections, such as Richie's suicide attempt or Connie's attempt to seduce Hector, these never felt artificial, they felt organic, growing from the characters themselves. Each character was so fully realized by the actors. A special mention must go to Sophie Okonedo as Aishe, who absolutely fucking kills in her role. Her face is so unbelievably expressive. With just a slight change to her mouth, Okonedo is able to convey so much pain and so much misery. It's stunning. But all of the actors were great, even Connie, playing the lightest of all the characters.

I loved this show. If you haven't already guessed. Enough to contemplate reading the novel, despite my problems with the prose. I think I'm going to give it a try....
Posted by matthew.