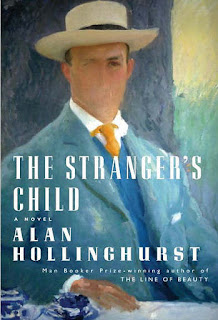 In 1913, George Sawle brings the young poet Cecil Valance to his home, called Two Acres. There, he meets Daphne Sawle, Beorge's younger sister. After a week, Cecil leaves, but not before writing Daphne a poem about Two Acres. Cecil joins the Army and promptly dies in action, and with his death, his poem takes on mythical proportions. The Stranger's Child tracks the history of this family, the history of the poem, and the social history of English from 1913 to 2008.

It's unfortunate for Julian Barnes that I read The Stranger's Child so quickly after A Sense of an Ending. Not only does Hollinghurst's novel have a larger canvas, with room for nuance and depth, but Hollinghurst benefits from a particularly refined style of prose, one without obvious signposts directing the reader's attention to important themes. Both novels are similar in terms of the macrocosm: both have a revelation in the final pages, both are about the intersection of memory and history, and both follow an aging cast through the years. A Sense of an Ending, however, uses the pretense of an older man looking backwards. The Stranger's Child, with its focus on the shifting perspective of the past, takes a provisional look at history. What is lost in memory is lost in history, Hollinghurst seems to say.

If it seems like a discredit to either to compare one grand social novel to a smaller shorter novel about one man, then it is simply in service of showing how out of step this year's Booker judges were. In purposefully selecting a "readable" novel (in this case, substitute "readable" for "brief"), the judges have left out of the short list a great novel. The Stranger's Child is irrefutably a fantastic novel, filled with gorgeous, nimble and deft prose, sharpyl drawn characters that change and grow with time, and huge lofty ambitions. This is a novel about the temporal aspect of art, the changing social landscape, and what Jacques Rancière calls the distribution of the sensible. Only through the vale of time can something build meaning, which is an overly reductionist reading of his theory. None of these things are explicitly referenced in Hollinghurst's novel. Instead, he allows the story and semiotics to do the work, to allow the reader to understand what is being said about art and time. On top of this intellectual pursuit of art and knowledge, Hollinghurst engages in a social history of gays in England through the 20th century, building on what he did previously in The Line of Beauty.

The Stranger's Child is not merely an exercise in symbolism or social history, but also a deeply affecting portrait of socially unacceptable love throughout time. George and Cecil's dalliances in the woods at Two Acres are heartbreaking in that both of them will be required to marry of the opposite sex, and cannot engage in their affair openly. Hollinghurst returns to this pain in a tacit manner, allowing the heartbreak to filter through the mists of time thanks to the work of subsequent protagonists further into the novel. Hollinghurst employs similar tactics in this novel as in The Line of Beauty to naturalize the love affair as normalized. This is a fancy way of saying that The Stranger's Child remains a love story, despite its interest in grand themes of time and art.

Some famous author once said that there is a tendency to overpraise longer novels because of the sense of accomplishment accompanying the completion of the novel. A corollary of this is that there is an anxiety that "easy" means "less valuable". Using both of these axioms, one could argue that A Sense of An Ending is qualitatively superior to The Stranger's Child because it is succinct and a much more palatable read. I would completely disagree. The Stranger's Child is a monumental work of English fiction in part because of its wide canvas, its incorporation of a history of art and a social history, and because of its tricky structure. The Stranger's Child does more than Barnes' slight work because there is simply more room to work with, and has much more to say about the intersection of memory and history. Ultimately, Hollinghurst's novel says something complicated about the transformation of art through the ages whereas Barnes says something slight about the mysts of memory and the starkness of history. It helps that Hollinghurst's novel can be mapped into Hayden White's The Burden of History and Barnes' ideas can be dismissed as overly reductionist.

I cannot help but compare the two thanks to a similarity of theme and because they fit into the matrix of social novels that English writers seem to excel at. Suffice it to say, that even without Barnes' novel scuttling underneath the looming shadow of The Stranger's Child, I would have still loved Hollinghurst's novel. Of the Booker nominees I have read, this is surely the best and most deserving of the award. However, its exclusion from even the shortlist simply speaks the Booker's inability to remain relevant.
Posted by matthew.