The King of the Badgers 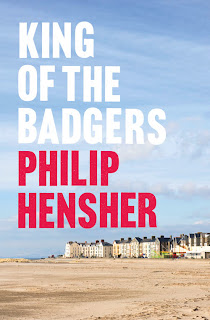 The quiet village of Hanmouth is far from London, but picaresque and beautiful, containing a small university, twelve pubs, a Neighbourhood Watch, a cheese shop owned by two men who host gay orgies every once in awhile, an estate council from which young China has been abducted. Now, all eyes of the nation are fixed on this small community, where everybody watches everybody and CCTV cameras gaze unblinking and silent. The King of the Badgers portrays an England in the 21st century as it copes with the postmodern problem of what to do when everybody is watching but you've nothing to show them.

This was not longlisted for the Booker this year, despite Hensher's prior novel The Northern Clemency being shortlisted and despite Hensher's prodigious talent and critical presence in the UK. The very brief version of this review is that The King of the Badgers should have been shortlisted, and possibly should have even won the prize. It towers over some of the novels published this year, and yes, I would even say it was better than The Stranger's Child, which I recently finished and reviewed.

Part of the novel's success is Hensher's gripping and exuberant prose. On his Wikipedia page, it is said that Hensher is known for his detached prose, his distance from the characters. While this might be true, the sheer linguistic deftness and dexterity that Hensher shows on a sentence-by-sentence rate is impressive. If I were judging a novel this year by prose alone, The King of the Badgers would surely be in the top 3 (with Oblivion and The Stranger's Child all competing). Each sentence is so intricately and brilliantly composed, with clauses and subclauses interpolated like a wonderful trumpet solo in the middle of a gorgeous Miles Davis song. Hensher finds a quick and often evocative way to describe a physical detail, then expands on it with more sentences to place it within the larger scope of the village itself. From the description of the estuary flowing through the center of the town to a central character's thin humble penis, Hensher's prose rivals some of the better stylists I've read before. It is Hensher's utmost fidelity to the grammatical rules that helps each phrase sparkle with complexity but clarity. If there was ever an author to argue for a style of rule adherence....

Of course, The King of the Badgers isn't a novel written for linguistics students. This is a "state of the nation" novel, something that the English excel at, something that, in American, only Franzen seems brave enough to attempt. Hensher's novel is explicitly concerned with the postmodern anxiety of constant surveillance. Perhaps this is reviewer's bias, but I started reading this novel on day 3 of a seven page paper on Michel Foucault's Panopticism, which is surely an influence on Hensher's novel, even in the most superficial of ways. In a nutshell, the panopticon is an architectural design that places each prisoner into a room where they cannot see the other prisoners, but they can see the central tower, where an unseen presence may or may not be observing them. Thus, the prisoners assume they are being watched and modify their behaviour accordingly. The model of the panopticon is echoed in the spatial and philosophical designs of institutions, or disciplines, such as prisons, hospitals and schools. In The King of the Badgers, the panopticon is represented in the ubiquitous CCTV cameras, the unseen Neighbourhood Watch (the presence of which is only felt in politely worded but sinister letters slipped through mail slots) and even in the village dwellers themselves. Their constant gossiping and judging of other people tends to affect each other's behaviour. This is a novel that could only be written right now, as Hensher plunges the reader into a wealth of detail relating to the music they listen to, the books they aren't reading for book clubs, and especially the television shows they watch. The presence of the TV, the forever strobing cyclops, weighs heavily in this novel, and it should, considering the central theme of watching.

The "state of the nation" novel, like Freedom by Franzen, is about trying to capture the national feeling at the moment of writing. It is usually expressed in an anxiety. In this novel, it is the ever present anxiety of the ever present observing eye. The cast of characters in this novel, sharply drawn and exhaustively detailed, are constantly expressing a feeling of discomfiture, not only with their own lives, but with each other's. It's enough for people to go bonkers what with all the watching. Hensher takes this to another logical step by showing us the people who have fallen down in this quickening march to modernity. David, the gay son of two retirees, brings a sexy charming man from London and poses him as his boyfriend, but David could never acquire such a partner, thanks to his crippling lack of confidence and his ever-expanding waistline. After a night of debauchery with the resident posh gay couple, David finds a measure of inner strength and when he does a bit of coke to shore up his mental defenses in celebration, he promptly dies of an overdose. In The King of the Badgers, the neverending fight for relevance and importance is like Zeno's paradoxes. There is a goal that never be achieved, a status that can never be attained.

Despite this slightly defeatist conclusion, Hensher's novel is always entertaining. At no point does Hensher ever let up the pace of swift cutting scenes nor does he ever let the characters wallow in self-pity, unless it is in service of a good joke. Do not let it be said that Hensher maintained a serious or dour tone. Instead, when there is a joke to be made, even at the expense of his characters, he never lets the opportunity pass. This is a funny novel and should not be mistaken for an overly serious novel, despite its lofty aspirations. Here is an instance of a novel both being entertaining, imminently readable, and successful at saying something about the conditions of life.

The King of the Badgers is a tremendous success. I began reading The Northern Clemency but gave it up in favour of this tome when I realized that it's 250 pages shorter. However, now that I have finished this fantastic novel, I plan to return to the book and its daunting length.

A small note on The King Badger's: the dust jacket uses a very specific tone and typeface for its logo and author. The inside of the book uses the typeface and layout as advertised on the UK hardcover. This leads me to believe that this is simply the UK hardcover with a redesigned and incongruous dust jacket being slapped on it for a North American edition. Ultimately, both covers are not very evocative or successful, but at least the UK's dusk jacket, title pages and spine match! The header image for this post is the UK cover, not the bland North American image of a cup of tea (which seems altogether a rather lazy image, meant to represented the sheer Englishness of the novel).
Posted by matthew.