Here's a photo of a protester from the Westboro Baptist Church - yes the church that protests funerals of soldiers saying that it was America's fault for allowing gay people to marry or whatever. They famously hate gays. Their signs often have things like "Faggots burn in hell" or whatever. Here's an adorable photo of a protester wearing a Glee shirt. This is fucking adorable. 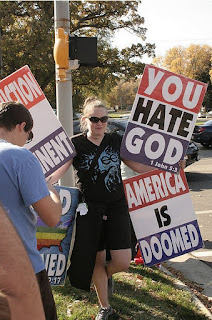 I don't post about religion on my blog because it's not really a topic that's worth talking about. I'm atheist, my whole family is, we're secular and we don't believe in religion. We have special disdain for organized religion that promotes hatred and intolerance. Theism isn't necessarily dangerous; it's the belief in the supremacy of the pontiff that's dangerous. Either way, the Westboro Baptist Church have set up their own pontiff who is dangerously influential among his followers. It is only a matter of time before somebody does something violent to the church in retaliation for their absolutely bonkers beliefs.

But before that day arrives, let's all sit back, with a smug look on our faces and laugh at this fucking photo.
Posted by matthew.