Year in Review - Part One

And so, the increasingly difficult task of evaluating quantitatively the novels I read comes around. This year, I am going to do something slightly different. Because I manage to read a few novels published in 2011 itself, I am going to rank them in a separate list, but still allow them to contend in the year's best overall list.

6 The Marriage Plot by Jeffrey Eugenides
5 The Adults by Alison Espach
4 Palo Alto by James Franco
3 Doctor Who: Touched by an Angel by Jonathan Morris
2 The Stranger's Child by Alan Hollinghurst
1 The King of the Badgers by Phillip Hensher

However, I did not finish Reamde by Neal Stephenson, even though I'm halfway through, and it would have no doubt replaced Franco's short story collection on this list.

The Best
10 A Friend of the Family by Lauren Grodstein
9 Star Trek: Destiny by David Mack*
8 The Spy Who Came In From the Cold by John LeCarre
7 Tapping the Source by Kem Nunn
6 The Vivisector by Patrick White
5 Oblivion by David Foster Wallace
4 Tinker, Tailor, Soldier, Spy by John LeCarre
3 The Death and Life of Bobby Z by Don Winslow
2 The King of the Badgers by Phillip Hensher
1 Matterhorn by Karl Marlantes

What an amazing year for books. One can track my interests throughout the year just like last year. When I decided to read classics, I did so for a month, and then switched to sci-fi for a couple months. I read a month of novels like Model Home and The Adults, books distinctly in the Franzen subgenre of social realism. Near the end of the year, I slowed down considerably and didn't read as much. Not just due to school but due to exhaustion. I was just tired of reading, I suppose.

This year I definitely took a bigger interests in my stats than last year. I started on Goodreads back in 2009, but it wasn't until the halfway point of 2010 where I started using it obsessively. When 2011 started, I had Goodreads down to a science, learning to quantitatively and qualitatively track everything I read. Goodreads also holds a challenge every year, where you estimate the amount of books you'd like to read, and then you attempt to defeat that number. At the outset of 2011, I set it at 85 books, hoping to tackle some larger books, such as Infinite Jest. I called this, in the blog, the 2011 Challenge, which I will get to in a second.

Here is the distribution of scores in a handy chart. 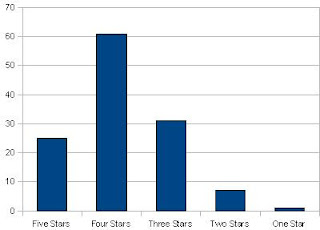 Frankly it's amazing that I read so much considering that I was in school or in the gym or out with friends. I had a hugely social year in 2011, and despite that, I manage to obliterate last year's record. There's no way I am going to beat that in 2012.

Pretty dismal showing considering that I set out to read 12 books. That's only 25 percent. That's a failure. Despite this small problem, I feel very good about my reading in 2011. For 2012, I don't plan on setting any reading goals, not even a number. I think 125 is anomalous and will never be repeated for the rest of my life, or at least until I retire. 2011 was a perfect storm of circumstance: no cable, no girlfriend, no responsibility and a desire to get back into school. For goals not related to reading, you'll have to wait for part two of my Year in Review.
Posted by matthew.