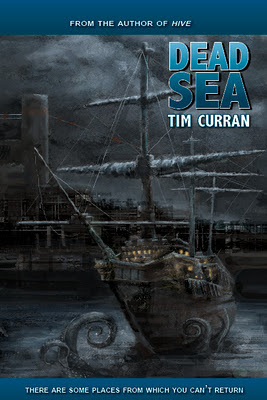 A group of construction workers and sailors are traveling across the Atlantic to South America where they will build an airstrip for a mining company. Unfortunately, their ship ends up in a bizarre fog that chokes, in a murky viscous sea almost red, filled with creatures unimaginable and terrible. When their ship sinks, they must fight for survival amongst themselves and amongst the awful things that feed in the fog.

Okay, a couple things first. This is the first novel I read on my brand new Kobo Vox that I received for Christmas. Yay, Mom! I've already put a couple hundred books on the damn thing and I can't stop searching for books I've always wanted to read, but could never find. 2012 will be a year in which I read a bunch of things I never expected to read. I love my Kobo already - I'm pretty excited about it.

Secondly, inspired by 4chan and my post about The Grapes of Wrath, I'm posting another image macro that details "what I read, what I expected and what I got". Instead of using 4chan's template, I made my own that is vastly bigger. This review is the first to have this new template of review, which is to say I will post the image and then expand on it. I'm not saying every review will be like this, but some will. Sometimes I'm exhausted of thinking about books critically and I just want to read something awesome and not to feel guilty about not critically appraising it for my blog that nobody reads. Here is the image for Dead Sea 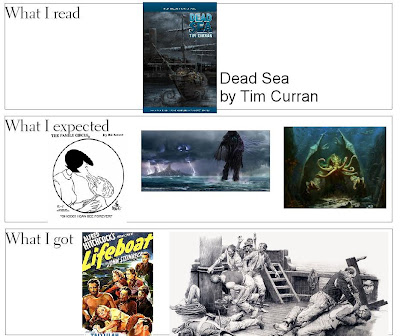 Some have appraised a picture at excesses of thousands of words. I somewhat concur, but not totally. If I did, I wouldn't have read so damn much. Look for my Year in Review: 2011 in the next couple days. I have to put finishing touches on it.

Dead Sea by Tim Curran. Not a great novel, but certainly not terrible. He set out to tell a Lovecraftian splatterpunk novel (somewhat mutually exclusive, but whatever) and he meant to include sea monsters. I chose this because of... the sea monsters mostly. I just fucking love giant squids. Did I receive a bunch of giant squids? Well some. A good portion of the book is the sailors in a lifeboat just fucking arguing. For pages upon pages upon ages. It felt like forever. But finally, in the third part, things changed, and the sea monsters came out in droves.

Then Curran had to go and ruin by trying to explain shit. He tries to explain that the sailors are stuck in some abortion of a dimension and he employs actual physics to explain it. Yes, the words "Einstein Rosen Bridge" appear in this novel. They should never appear in a Lovecraftian novel. Ever ever ever. I don't want things explained to me, especially not by some guy who has read Brian Greene's Elegant Universe and now thinks he's an expert on theoretical astrophysics that Stephen Hawking doesn't fully understand. Curran's explanations soured a good chunk of the novel, but luckily, all is not lost. The end is fairly killer.

The primary antagonist, Saks, a homophobic bully of a sailor, gets shot in the stomach, but the weird creature that's been growing inside him (unbeknownst to the cast) saves his life, only for one of the other characters to simply, from out of nowhere, bash his brains in with a wrench. Yes, that's how the climactic showdown occurs. And it's fucking fantastic. It received an audible gasp from me while I was reading. It was shocking, and purposefully unHollywood. There was no catharsis or great relief; it was just cold-blooded murder. And it was chilling.

Then, the big baddie appears and something happens. I can't explain in such a short paragraph, but Curran makes it awesome. He finally brings out the true horror, the kind that drives you mad, the kind that makes you tear out your own eyeballs to avoid looking at it. It's good.

But it's at the very end. I went through hundreds of pages of sailors making gay jokes and having fisticuffs. I'm not sure if it was worth it. I'm not sure if I would recommend this to anybody other than hardcore fans of sea monsters. Oh well.

First Kobo novel down - only a million more to go!
Posted by matthew.