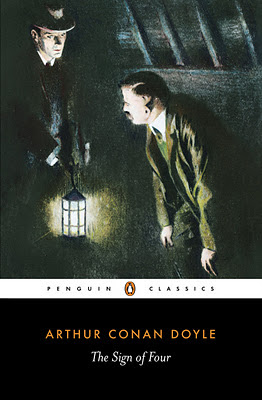 Sherlock Holmes and Watson receive the beautiful Miss Marstan who explains that her father or whatever has gone missing for ten years, but she receives a beautiful pearl one a year from a mysterious benefactor. The game is afoot, and Sherlock gets his fill of dirty savages with blowdarts and tiny feet and an ancient Indian treasure. It's an imperialist racism fest!

I'm reading this for my Victorian literature class, and as you can see, I'm certainly reading this in a particular way. In the name of journalistic integrity, I must admit to a particular bias. I'm presenting a seminar on The Sign of Four, and I plan to use Edward Said's book Culture and Imperialism as a way to show that England's dependence on the colonies is what fuels the plot of this novel. Without the economic dependence on India (as symbolized by the treasure) then the beautiful white lady wouldn't be able to be rich! Alas! 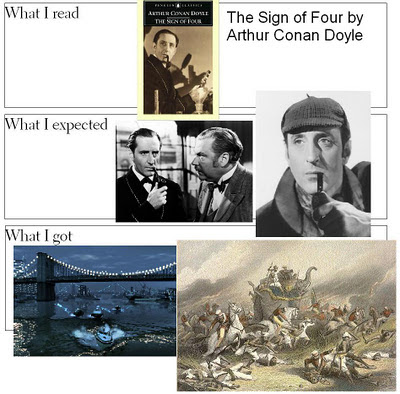 As you can see, I totally expected a classic Sherlock Holmes story with Sherlock going around sniffing out clues and in general, being an autistic jerk who treats Watson poorly. What I received, in addition to the above, was a sweet boat chase and a whole lot of Indian background.

The villain in the story, if there is a villain to be identified, is seeking the Treasure of Agra, which is a bunch of gems and jewels stolen from a rajah just after the sepoy rebellion of 1857 (a subject covered by J G Farrell in The Siege of Krishnapur). Holmes and Watson are fairly unimportant to the plot, to be honest. Holmes does a bit of detecting and deducing at the beginning of the novel, but otherwise, the people just fall into their hands and spill the beans to Holmes.

There are some interesting tidbits to get out of the way before discussing the postcolonial aspect of the novel. First, this is definitely a novel of London. The case takes Holmes and Watson across the city and back, through chases and through detection. Many many many real places are referenced, and the endnotes in the paperback helpfully explain where everything is. I'm sure some insane Sherlock fan has composed a map of their journey in each story, but I'm too lazy to Google such a map. The other thing, connected to the first, is that Holmes appears to know everybody in the city, from the lowest to the middle (the upper class aren't represented in this particular novel, but we can assume he is). Any time they reach an obstacle, Holmes merely identifies himself and gains passage. We find out in this novel that Sherlock was a bare knuckle boxer and was nigh unbeatable (something the atrocious but accurate Guy Ritchie novel picks up). Holmes' connection with the city itself lends him authenticity as a detective. A lot of his deductions are lucky and based on circumstantial evidence, but his true powers lie in networking. The Sign of Four is a masterclass in the usefulness of networking in the modern metropolis. I can totally understand why my professor chose this novel to represent the Victorian era. Not only is there a constant anxiety of dirty foreigners, but there's this arrogance about the superiority of the city, the thriving throbbing city of London, where people do drugs, have boat chases, send superfluous wires and telegrams. Sherlock Holmes without London makes no sense whatsoever. His true formidable prowess comes from the ability to navigate the modern metropolis, something hitherto not as impressive in the pre-Industrial era.

Of course, part of the Industrial Era's power is their dominance of the colonies. In The Sign of Four, the treasure that everybody seeks is the money of the East, symbolized by the gems and emeralds. Notice that even the wealth itself is a form foreign to the Victorians. Instead of inheritances or wills or pages or sterling, the wealth is baubles and shiny stones.

The plot of the novel does not function without the colonies. This grid can be laid onto the dominator/controlled relationship. In a power dynamic, there is always one party that oppresses the other. However it is not a zero sum game. Certainly, the power dynamic swings in a subtle way. England becomes dependent on the wealth gained from India. In return, India develops a power over England. They require the wealth of India just as the plot of Sign of Four requires the wealth of India.

In Culture and Imperialism by Edward Said, he lays out a system of interpretation to understand novels such as Kim and Mansfield Park through the relatively new lens of postcolonialism. Without the colonies, the Bertram Estate would not be able to get up to their silly games and even the plot of the novel. In The Sign of Four, the dependence of wealth from the colonies is manifested in form of the plot device, the MacGuffin. Without imperial dominance, the villains would have never had the opportunity to steal the Agra treasure.

Speaking of imperial dominators, we can turn to Watson, our author substitute. He is a military figure, and the cult of the military personality was prominent during the late Victorian era, paraphrasing Said, is about bashing in the heads of those who need bashing. He shoots Tonga, the villain's non-white accomplice, thus asserting imperial dominance. Tonga is an interesting figure in the novel, and Holmes helpfully sums him up for us.

Before turning to Holmes' conception of Tonga, we turn to Said's conception of Orientalism, in which the West dominates and controls the East by simple fact of defining what the East is. The Occidental idea of the Orient serves to replace the actual Orient (as if it could ever be summed up in a word) and thus has power over it. Orientalism is a discourse, an idea borrowed from Foucault, in which the act of defining something gives the defining actor the power over the defined. It is a power dynamic.

Returning to Tonga, Holmes draws on a vast network of Orientalism, the scholarly act of understanding the East, ie various anthropological and scientific texts in order to deduce from the thorn who Tonga is. Based on unscrupulous and biased research, Holmes provides a definition of Tonga (we know he is not a Hindu because Hindus don't have small feet) and this definition serves to replace the conception of Tonga.

Indeed, even when Watson sees Tonga for the first time, he uses the word "it" to refer to Tonga. He calls him a "distorted creature". This distortion is key. Tonga is considered distorted because he is not white. He is a white figure seen through a glass darkly.

Then Watson shoots him.

The Sign of Four isn't a very interesting book beyond the fact that it establishes key elements of Sherlock's mythos, ie the boxing, the cocaine, all these other things. It's not a well told story, as the boat chase isn't exciting, and Holmes doesn't really do much detective work. The Sign of Four is more fascinating as both a proto-detective novel working out the kinks of a soon-to-be essential genre, and as a document of imperial arrogance. I don't really like this novel because it's boring and stilted and the solution is idiotic, but I like this novel because of what I can do with it. Obviously, numerous people have done work on Edward Said and Arthur Conan Doyle (including Said himself!) so I'm not really saying anything world-shaking. However, this just confirms to me that Edward Said might be my favourite literary critic of all time. Sorry, F R Leavis and Harold Bloom, I have a new hero.
Posted by matthew.

Tonga was from Andaman & Nicobar Island ( A part of India), not from Africa. Although you had wonderfully written the summary, not giving enough care to things like these shows how stereotyped you are.

Hey Anonymous, thanks for the comment. I'm not sure I wrote that Tonga was from Africa. Also, I make numerous references to India. So I don't get it.

Though you probably won't come back to defend your strange comment.