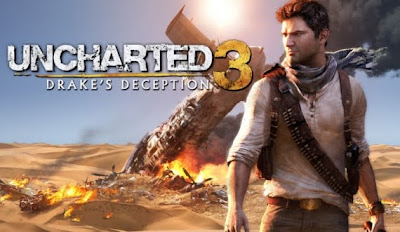 Almost a year has passed since I have played Uncharted 2, and in my mind, the game continues to rise as one of the best I've ever played. I was terribly excited about the second sequel, due in November '11, but I had not the funds to acquire the game. However, thanks to living rent free, money seems to be no object, as my ever-increasing wardrobe can testify.

Uncharted 3, for those not in the know, follows the pulp-style adventures of one Nathan Drake, the character exclusively controlled by the player, as he searches for treasure, gets mixed up with nefarious villains, and then saves the day. The first two games self-consciously use the template used self-consciously by Indiana Jones. There's globe-trotting, fist fights that go on forever, a strong female presence, some MacGuffin that everybody wants to get their hands on, and then a climax that features the total destruction of the exotic locale. More specifically, Uncharted even uses the plot structure of Indiana Jones, featuring puzzles at the end of the first act and at the end of the second act, and a long action sequence on a convoy that signals the inevitable confrontation between the villain and the hero.

This particular game looks at Sir Francis Drake, supposedly one of Nate's antecedents, figuratively and in a familial way. Drake was sent on an errand by the Queen, and there is some missing time in the chronology of that journey. Nate suspects that Drake found something, the Atlantis of the Sands, and hid it, even from the Queen. Two British people are after the treasure and they employ a seemingly endless army of goons to acquire it and eliminate Drake and his friends.

The major problem that Uncharted 3 has is first and foremost, the villains. In the second game, the villains were well drawn and if you asked the player to name some adjectives or attributes of the villains, they would not hesitate. In the third game, the most I can say about either the Helen Mirren-lookalike or the Gavin Rossdale-lookalike is that they speak with Received Pronunciation. We learn nothing of their motives (beyond the overly simplistic refrain of "they seek power") and we learn nothing about the younger man's attachment to the older lady, whether it be a maternal relationship or romantic or simply business, we never know. This makes the climax a bit of a letdown as it's not satisfying to eventually kill either of them.

Actionbutton.net, one of my video game criticism heroes, calls Uncharted 2 (paraphrasing here) a murder-simulator. Despite the rakish and charming Nate's propensity for humour and lightheartedness, the player spends most of the game dealing out copious amounts of death. In my playthrough of Uncharted 3, I murdered over 700 people, with a variety of guns and explosions. These are men with lives and families, and I murdered over 700 of them. Yes, it is in self-defense, but Uncharted 3 makes an extremely poor decision in highlighting futility of Nate's adventure.

One of the major themes of this game is that Nate is trying to prove something, and gets in friends and himself in danger in order not to seek a treasure, but to solve a mystery, to satisfy a curiosity. He essentially murders hundreds of people (dooming even more in the destruction of the city in the sands) so that he can simply scratch an intellectual itch. It doesn't become clear in the third act that the villains are after something other than money so Drake can't possibly claim that he was doing it to stop the villains. If it was just treasure, he could have let them just do it. After all, they're already rich. As Sully, Drake's friend, and Elena, Drake's romantic interest, keep reminding Nate (and us), these people are out for blood and whatever Nate finds, it's not worth the bloodshed.

Let's just repeat that for a second. Whatever it is, it's not worth the bloodshed. The game is at pains to convey this. We're constantly reminded that Nate is doing this out of pride and curiosity and not out of some altruistic motive. The big cathartic moment comes at the end when Drake helpfully tells the villains (and us) that he no longer has anything to prove.

Oh good, I'm glad. I'm glad that it took a huge massacre of Arabs and Englishmen in order for you to learn a lesson. Not to mention the innocent bystanders who no doubt took a bullet here and there, and the innocent band of Arabs who help Drake get across the vast 500 mile-wide desert.

Of course, ethically speaking, the result is positive. The treasure that the villains seek could be used for terrorism and eventually tyranny, so it is imperative that Drake be the one to stop them. However, like I said before, this doesn't come to light until Drake is already in the endgame.

I loved the game, don't get me wrong, and the only reason why I am criticizing the game for this is because the game is not self-aware of this apparent ethical dilemma. In the second game, not a moment is spared thinking of the hundreds of dead people (including a large amount of civilians), but the game never thought to question Drake's motives. In Uncharted 3, the developers make a large misstep in pointing out Drake's hubris, then putting the murder-simulator in the hands of the player. There is a cognitive dissonance here, a disconnect between the fun pulp-style adventure (that contains important themes of humility) and the nonstop bloodshed of the game itself.

In Call of Duty: Modern Warfare 3, which I just recently played, but won't review (short version: the game is short but fun, but not as good as the first Modern Warfare), there is no ethical hand-wringing. The Russians are invading; we must stop them. The Russian terrorists are working behind the scene; we must eliminate them. There is a little bit of jingoism and nationalism, but not nearly as much as the second Modern Warfare. All in all, that trilogy of games is morally simple and monochromatic. There are bad guys and there are good guys.

Uncharted 3 makes the mistake of asking if the hero should be doing all this. There's something fundamentally flawed about a video game asking the player if they should play the game.

Or, there's something incredibly ballsy about it. But that's a different review.

Despite my qualms of the storytelling, the gameplay is incredible and the level design is absolutely remarkable. From the the chateau in provincial France to the barfight in England, to the sinking cruise ship, to the immense city under the sands, each scene is exhilarating and in a few cases, fucking breathtaking. The combat is fun, but the aiming is sometimes a little too sensitive. It's hard to use a sniper rifle at a good distance because the analog sticks respond too much. Plus, the game is sometimes annoying when packing on the snipers, the armored shotgun guns, the asshole with the missile launcher, and the countless dudes with rifles - all at the same time. I played on Easy. I can't imagine how difficult Hard or Crushing is. 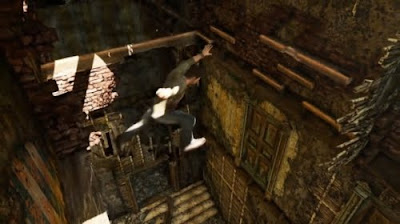 Another thing. I can't find a good picture of it, but there is a lot of platforming in this game. Not only is it better than the platforming from the second one, but it's also incredibly responsive and intelligent. Drake won't accidentally jump to his doom unless you particularly force it. With the first and second one, sometimes I had to take guesses on what direction I would need to jump, and a lot of the times, Nate would plummet to his doom. This rarely happened in the third game.

Plus, as someone who has recently come into athleticism, I can honestly appreciate that Drake must be fucking ripped. His upperbody strength is unreal. He does all this climbing and hanging from one arm and pulls himself up and over without using his legs. He must have crazy core muscles and the hottest sixpack ever. Yes, I have a bit of a crush on Nate Drake. Who wouldn't? He's smart, funny, good looking and is totally built. He looks like Nathan Fillion but with Ryan Reynolds' body. Drool.

Uncharted 3 isn't the masterpiece that Uncharted 2 is. It's extremely close. The locales are exotic, the melee combat is fantastic, and the setpieces are amazing. What's missing is the dimensionalization of the villains and the bizarre ethical dilemma into which the player is forced.
Posted by matthew.